How green are we?

Eighty percent of the respondents to our recent sustainability survey say they are at least somewhat familiar with what sustainability is, and more than half are already achieving sustainability goals through a variety of measures, most often in the use of recyclable materials and lightweighted packaging, as well as reduced energy use and greenhouse gas emissions.

Responses from materials suppliers/converters and equipment companies were virtually identical to those from brand owners and contract packagers, showing a very similar level of awareness and involvement. The only variances occurred between respondents who described themselves as "very" or "extremely" familiar with sustainability, as compared with those who claim to be "somewhat" or "not at all" familiar.

Packaging Digest's survey was sent electronically in early December, just a month after Wal-Mart announced its sustainability scorecard initiative. Corporate/general management and engineering/production each accounted for one-fifth of the respondents, while marketing, packaging design, purchasing and research and development each represented 10 to 13 percent. The remainder did not identify their job function. 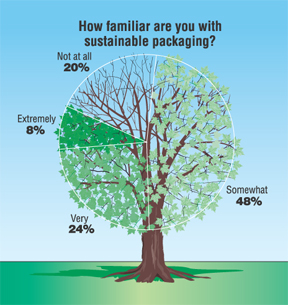 So how green are we? Thirty-two percent of survey respondents say they are either "very" or "extremely" familiar with the idea of sustainability (see the "tree chart" at right). Sixty-one percent believe that the emphasis on sustainable packaging has increased during the past year, while the remainder say it has stayed the same. However, that number changes for the "familiar" group previously identified—among them, 77 percent claim that the emphasis has increased.

Although Wal-Mart has made it abundantly clear that it considers sustainability to be a business economic issue, only 19 percent of our survey participants agree with that philosophy. Just a tad more than one-third of the respondents say they view sustainability as an environmental initiative; 46 percent claim that the economic and environmental importance weigh equally.

When making decisions about packaging, 21 percent of the participants say that sustainable design is a "very important factor," as compared to 8 percent who claim it is "not important." About one-third each voted for "somewhat important" and "only sometimes a factor (see the second "tree chart" on page 41)." Again, however, the importance factor is weighted more heavily among the "familiar" group, with 30 percent of those people voting for "very important" factor in making packaging decisions. 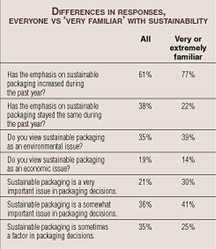 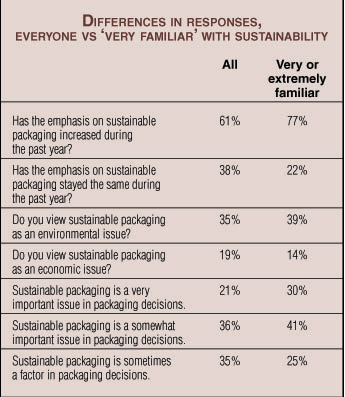 The differences between suppliers and brand owners showed up also in the question about the importance of sustainability in designing, specifying or purchasing packaging equipment (see table at right, which shows responses of all survey participants, both suppliers and end users). Brand owners, for example, are more likely to want the equipment to meet market criteria for performance and cost (56 percent) than are suppliers (44 percent). Brand owners also say they want the equipment manufactured using clean production technologies and best practices (28 percent), compared to suppliers (21 percent).

Packaging Digest's survey asked four open-ended questions, a tactic often avoided in most surveys because they tend to be ignored. Not here, however—each question netted at least 600 write-in responses, pointing out the importance of the topic to the survey's participants.

One question asked: "In your opinion, what is the greatest impediment to adapting sustainability on the packaging processes you currently work on?" The most common answer was cost, "that is, convincing suppliers to make the necessary changes to satisfy our requirements," explains one respondent. "If the consumers show that they care enough to select products for sustainability, or the government requires it, it will happen. Otherwise, this will not happen until sustainability is economically driven," writes another. And yet a third responds: "Lack of knowledge from the consumer is a problem. There is no push to go sustainable unless it's a plus for the consumer. For that reason, cheapest/fastest/prettiest to market is a priority." 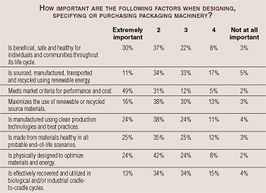 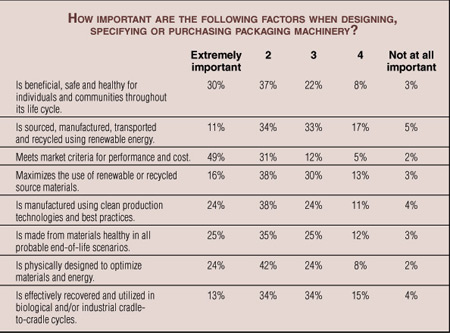 Some respondents mention the lack of readily available materials, or long leadtimes on those materials. "There are leadtime delays due to the extra effort and extra costs involved. It does not seem like 'sustainability' is mainstream or readily accessible yet," says one person. Points out another: "The resin simply doesn't work in many applications, and until more sustainable resins are available—especially high-barrier resins—we cannot create a functional package." Many people complained that they have difficulty sourcing the materials, especially in the quantities they require, because production in many cases is not keeping up with demand. Others worry that the materials may not provide the level of protection their products require: "Making sure package performance isn't compromised, leading to higher damage levels," says one respondent.

"By nature, our packaging is at a minimum to begin with, so therefore there is not a lot to work with. That being said, we are limited to our shrink films, and all investigating we have performed has yet to result in a usable alternative," explains an obviously frustrated participant.

Yet another impediment mentioned repeatedly in the open-ended question is a lack of knowledge on the part of the consumer. "The problem is end customer perception and big box store requirements and demands. I work for a big wine company where marketing feels that the glitz and glamour is what sells, and this is endorsed and even compounded by the big box and chain store world," says one person. Echoes another: "The customer does not perceive that it's a need."

But not just the consumer is being maligned. Says another, "Ignorance of corporate and upper management to the importance of packaging in general, and sustainability in particular," complains one respondent. "Management isn't interested in sustainable packaging, thinking it could be harmful to customers and not be worth the time to develop." 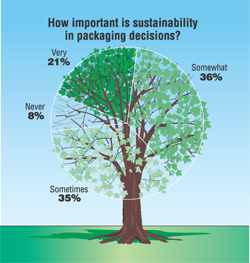 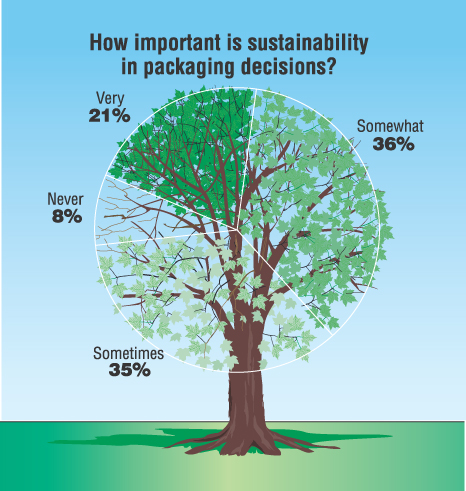 Another open-ended question asks survey participants what metrics, if any, are currently being used by their companies. Nearly half reported none at this time. Other responses, however, listed a variety of measures: source reduction; reduced emissions (greenhouse gases); water use; percentage of renewable materials; recycled content; life-cycle analysis; and the Wal-Mart scorecard. One person wrote: "We recently revamped the entire plant engineering and maintenance organization to implement a new culture of process engineering, although it's currently in the infant stage." Another person writes: "We are running near zero waste at our headquarters building, and we have several different ways of tracking it, which is done by our Sustainability Committee."

The survey also asked what tools or resources the respondents need to help reach their sustainability goals. "Credible definitions and expertise," writes one person, reflecting the sentiments of many. "What is now out there, I am highly skeptical of. There are lots of consultants out there, and extremely generic articles are being written and published which I wouldn't use for a Packaging 101 course."

In addition, many of the people surveyed cited trade magazines as a good future means of disseminating credible information. At Packaging Digest, we're listening.