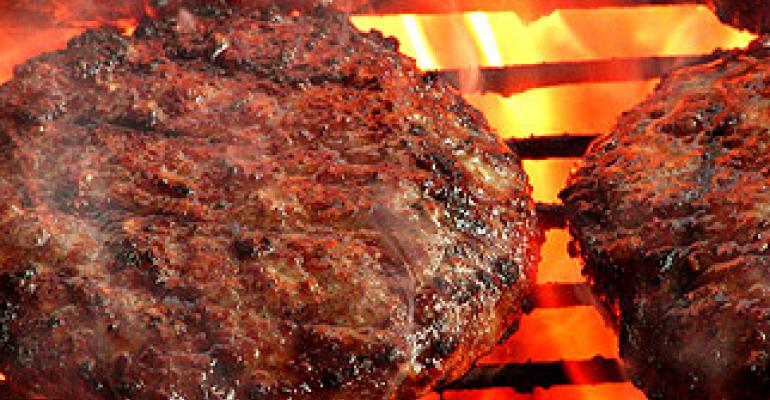 Consumer attitudes towards ground beef
The Cattlemen's Beef Board & National Cattlemen's Beef Association gathers research information about the meat market share in the U.S. Not surprisingly, one of the research findings that it chose to publish was a breakdown of the total U.S. protein market share at retail, which found beef capturing the majority of the market with nearly 40 percent of the market share. Another graph at the site details eating frequency by beef cut clearly illustrates more frequent consumption of ground beef versus other cuts.

Despite the popularity of ground beef, it along with other meat products are experiencing push-back from environmentally conscious consumers over the last few years. Just last year, the NY Times ran an article titled, "Rethinking the Meat-Guzzler." In the article, food journalist Mark Bittman writes, "...meat is something people are encouraged to consume less of, as the toll exacted by industrial production increases, and becomes increasingly visible."

These impacts have become more visible as result, in part, of research from organizations such as the Food and Agriculture Organization (FAO) of the United Nations. In a release dated Nov. 29, 2006, FAO stated that the livestock sector generates more greenhouse gas emissions as measured in CO2 equivalent-18 percent-than transportation.

When good food goes bad
Additionally the environmental impacts of ground beef and other foods increase when they enter the food waste stream, as the decomposition of organic waste material creates greenhouse gases (GHG). This can be a serious problem when the volume of food waste generated is considered.


According to the U.S. EPA, almost 12.5 percent of the country's total municipal solid waste was food scraps and less than 3 percent of this 32 tons of food waste was recovered and recycled.

Food waste is a problem not limited to the U.S., WRAP (Waste & Resources Action Programme-the UK delivery body program created in 2000 to cost-efficiently reduce waste and increase recycling) reports that an estimated 6.7 million tons of household food waste is produced each year in the UK and food waste is responsible for at least 15 million tons of the UK's carbon dioxide equivalent emissions each year.

In WRAP's recommendations on how to reduce food waste, the organization states that packaging technology plays an important role. WRAP specifically recommends improving or adapting packaging by applying technologies such as oxygen scavengers and modified atmospheres to increase the shelf life of products.

Developing technology for challenging applications
According to Sabdo, ground beef is a challenging product to create modified atmosphere packaging for. "Ground beef has so much residual oxygen," he explains. "Think of it as a weave and in that weave there are the air pockets. Air is incorporated throughout the product. There also is fat, and there's oxygen in the fat."

Prior to the show, Multisorb had already developed a MAPLOX program for muscle meats, from which it has seen good results. "On the muscle meat, they [meat packers, distributors and retailers] have almost picked up a full week in distribution," Sabdo remarks. But the company waited until this year to roll out its MAPLOX program for ground beef.

As a key component of the MAPLOX program is the Multisorb APA-500 controlled atmosphere sorbent dispenser. An oxygen monitoring program within the unwind chamber of the APA-500 senses oxygen levels and adjusts inert gas flow, assuring that the customized oxygen scavengers maintain their maximum capacity during the manufacturing process.

As to the program's efficacy, Sabdo cites research conducted by Brad Morgan, professor of Animal Science at Oklahoma State University. Morgan and his team placed the ground beef in a mother bag for 21 days with the MAPLOX program in place. The ground beef was then transferred to simulated retail refrigeration environment.

According to Sabdo, the flavor profile was unchanged and the ground beef retained a bright red color. Because of this, he explains that retailers can keep MAPLOX packaged ground beef in the meat case longer. Thus the likelihood that the meat will be consumed versus landfilled is increased.