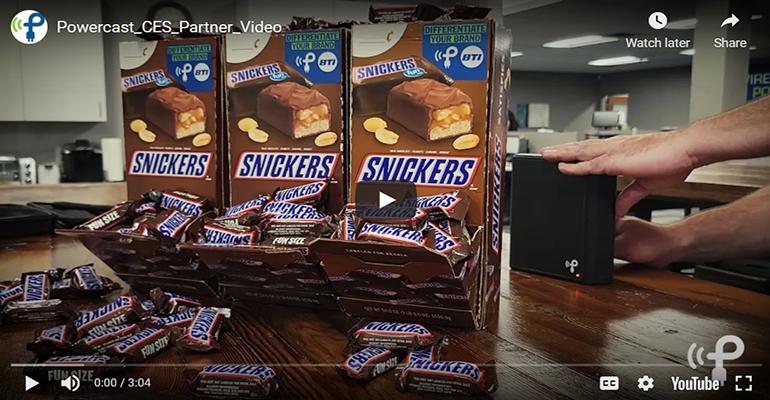 Billed as the most influential tech event in the world, the annual Consumer Electronics Show is a showcase for visionary companies. Found amidst the 2,200 booths on the CES 2022 Las Vegas show floor this week is wireless power innovator Powercast. Ahead of the show, the company created a promotional video showing…

Both of these are leading-edge cool, but what excited me most was the portion showing a wirelessly powered, illuminated packaging display that starts at the 48 second mark of the 3-minute video below. It’s a blinking logo on the box.

A little background about the company and the technology is helpful: Powercast’s technology is based on long-range, power-over-distance wireless charging using broadcasted radio-frequency energy, aka radio waves. That energy is converted into DC power by the receiver, which in this example is part of the packaging.

The technology reminds me of the brilliant inventor, Nikola Tesla, who among other projects was working to deliver power wirelessly circa 1901. Also, the form factor of the transmitter shown in the video looks a lot like our home router, but instead of a WiFi signal Powercast’s device transmits RF waves.

Powercast's technology touches millions of users across more than 15 industries, including automotive, consumer electronics, IoT, entertainment, retail, RFID, and sensors. And with demonstrating this prototype, packaging, too.

Seeing is believing, and the attention-drawing shelf impact of a large box of Snickers bars with a blinking light is irresistible. In a sea of colorful packaging and numerous “look at me!” graphic designs, a display like this is a potential gamechanger.

But it’s about more than the visual effect, the other half of the proposition is the enabling wireless technology that permits placing the packaging anywhere within the broadcast area.

“This new batteryless technology may be an added boost for more brands to leverage smart packaging for efficient and environmentally friendly on-pack communication with consumers,” offers Pierce. “Continuous power makes total sense for Point-of-Purchase displays as seen in the video because lights and actions draw shoppers' eyes. Wouldn't it be lovely if it was motion activated though!”

Packaging applications hold much upside opportunity, with a broad range of brainstorming possibilities.

I could envision a forward-thinking brand trialing this with large master packs and club-store packaging. One could extrapolate a future version that brings the wireless power on- or in-package to smaller formats. By then, they’d use printed electronics directly on the packaging that could be sustainably recycled or reused.

But for now, the future in smart packaging appears a little brighter.