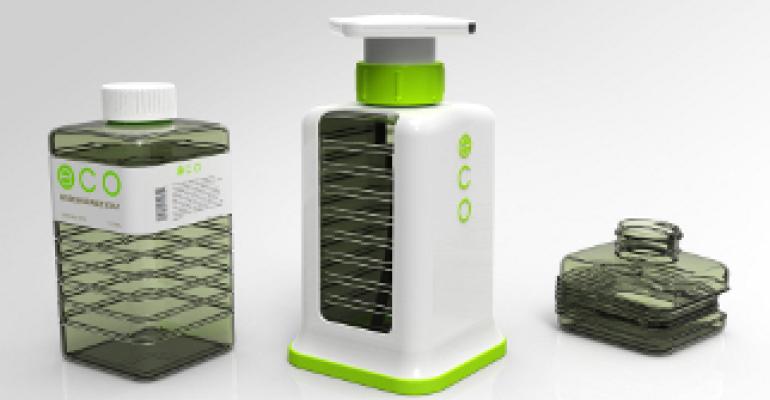 Want to drum up more support for your package design? The answer might be as simple as getting really good rendering software.

This is according to Klaus Rosburg, owner of Sonic Design Solutions in Brooklyn. Renderings will make your past work look cool, sure. But sometimes you can attract more attention, as Rosburg has, when you just make something up. 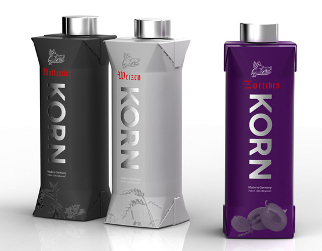 His packaging concept for Korn is his most recent example. The renderings aren't for a client; they're not even of an actual product—that exists in the U.S., anyway.

"If you already know what Korn is, it's a little bit of an inside joke," Rosburg says. "Korn is a liquor made from grain, similar to vodka, but less filtered. It's a cheap nip that's popular in the countryside in northern Germany. As a kid, I remember men making deliveries on my grandfather's farm. After the hard work was done, they'd pass around a bottle of Korn. It's a stiff, gritty, working man's drink."

Rosburg drew up the packaging in the spare moments of an afternoon, altering Solidworks models left from other projects and generating the imagery in KeyShot, the high-speed industrial design renderer from Luxion.

Rosburg imbues his fictional brand with glamour wildly disproportionate to the drink's hayseed reputation. But the example is only partially tongue in cheek. While the carton communicates something inexpensive, the premium-vodka bling boldly asserts its sophistication. Although the idea might sound lowbrow, in SONIC's renderings, you can begin to see how liquor in a paper packaging could be appealing—at least for certain consumer circles.

Humor aside, Rosburg's quick brainstorms can lead to some serious business. Rosburg uses renderings of these fictional products to connect people who do make products, but perhaps haven't considered outside-the-box possibilities.

In this case, Rosburg heard that shipping liquor from Europe was expensive. A soft and square package would allow exporters to pack more volume (of Korn or some other spirit) with less breakage.

"I plan to show these renderings at an upcoming design convention. They show what SONIC can do technically in terms of packaging and in branding elements, like the cap finishes and debossed foil lettering," he says, "and the concept itself, even if it's a little unusual, can get some genuine consideration." 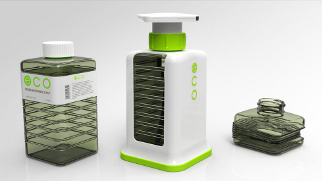 Designer soapbox
Floating provocative ideas though photo-real renderings has worked well for Rosburg in the past. In a similar side project, SONIC conceived of a permanent soap dispenser mechanism with recyclable refill cartridges. "We were thinking it terms of making household products greener and I came up with this concept. I did the renderings fairly fast and they were posted on The Dieline packaging design blog.

Rosburg was nonplussed by the response. "From just that one post, I had suddenly interest from manufacturers all over the world." SONIC actually entered contract talks with a company in Spain looking to release the dispenser-cartridge line in Europe. The project ultimately fell short on funding, but nonetheless Rosburg found the whole experience positive.

"It's amazing. It really showed me the power designers have now to influence the marketplace. And really, it's all due to the technology we now have. How else could that have happened without KeyShot? I can make an image in the course of a few minutes, put it online, and it has a legitimate chance of become a real product." 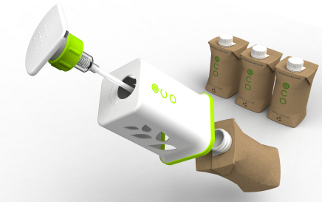 Images that ask "why not?"

One usually thinks of producers or entrepreneurs being the instigators for a new product. After the after the idea is pretty well cooked, ID comes in later and to follow their directives. But it's becoming increasingly possible for designers to reverse that dynamic and broach an industry conversation with their own ideas.

"For us, having a good rendering package and some contacts in the trade press is good business development," Rosburg says. "It opens the door to new opportunities."

As for boxed Korn, is it even feasible store hard liquor that way? Rosburg doesn't know.

"I figure if a manufacturer really wants to put hard liquor in a lined cardboard package, they will figure out a way to do it. My hunch is that hard liquor is stored in glass because otherwise the alcohol content would degrade the packaging plastic liner liner over time.

That being said, a liter of Korn isn't meant to stick around very long. "Drinking too much Korn, you're going to have accidents," Rosburg jokes. "It'd be better if the packaging wasn't glass."