Sometimes security can bring peace. In the fertile hectares of Zeraim Gedera, near the town of Gedera, south of Tel Aviv, seeds are being planted that are finally disrupting would-be counterfeiters and gray-market imitators who, in a three-year period, cost the company between $750,000 and $1 million.

These seeds aren't contained only within 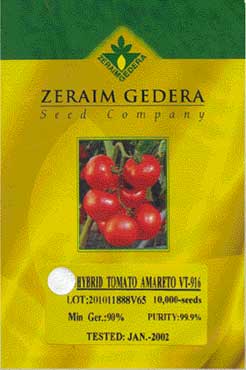 the Israeli marketer's packages, but also on them. In a program started exactly one year ago, Zeraim is adopting a security technique that it believes is eliminating the problem. "So far, it seems to be working extremely well," PD learns from Ohad Zuckerman, Zeraim's president and CEO. After initial domestic shipments with the labeling method, the company expanded its use to Egypt and Turkey.

Astonishingly, the system's adoption comes with a 4-cent unit cost; small when considering a single pouch of 10,000 tomato seeds like the one pictured can reach $450 at the grower's level. Some special seed orders can push the price to thousands of dollars. Yet, Zeraim is able to put through the security program with minimal in-house investment.

As Zeraim's near-worldwide shipments of its premium produce seeds to distributors broadens to include North and South America and Asia, it is expanding the range of its offerings–none implemented with genetic modification. The company is doing this by keeping its focus on produce, for both greenhouse and open-field planting, offering superior taste, long shelf life and nutritional values, together with resistance to various diseases and pests, Zuckerman notes. With these goals in mind, he says, "this package has an enormous role."

Sophisticated structure
The approximately 65/8 x 41/2-in. pouch taking on additional security functions is already a sophisticated structure, negating the effects of moisture, oxygen and light while also protecting the seeds from damage in transit. And, there are easy-tear-scored corners that permit controlled removal of the high-value seeds.

Converted by the CLP subsidiary of Tadbik Group, which helps to set up the security program, the side-sealed pouches are formed of (from the outside) 48-ga polyester/8-micron aluminum foil/3.6-mil PE. CLP reverse-prints the polyester in up to seven colors by rotogravure with the appetizing vegetable graphics before laminating. CLP also supplies Zeraim with similar generic pouches that are undecorated for simpler in-house labeling of special or very small seed orders.

Also printed and applied in-house is the product-specific label stock with the security feature. This is an inconspicuous pressure-sensitive spot disk measuring only 12 mm dia–smaller than a dime. It is produced by Latent Image Technologies (LIT). The company is represented here by Tadbik's LogoTech subsidiary, PD is told by Leslie Gurland, president of Tadbik's U.S. operation.

The disk for Zeraim is made of polyethylene, with radiation applied through an image mask and chemical treatment to produce a high-resolution image that is reportedly stable, non-degradable and impossible to falsify. The images can be viewed only through a polarizing lens.

LIT president Shimon Niselovich informs PD that the technique, involving radical changes in the macromolecular structure of the material, is also being developed with other polymers. He also notes that a U.S. patent has been issued for the method.

In the version made by LIT for Zeraim, the marketer's logotype and coded information are embedded in the disk. Three designs serve various geographic areas of distribution, simplifying tracking of the packages.

Simple to implement
At Zeraim, Ohad Zuckerman is pleased by the simplicity of implementing the security program. "When we were approached with the idea, it seemed like one we could adopt within our system," he recalls. "The special environment in which we prepare and process our seeds places some demands on our packaging, such that we value accuracy above speed. So bringing in the disk was not difficult."

In the packaging area of the plant, conditions are controlled to keep the seeds in a low-temperature and low-humidity environment. Packaging is semi-automated, with the preformed pouches filled by count or weight on two machines from Elpack Packaging Systems.

The first machine is a doser that feeds seeds from a hopper into 24 vibratory channels that, in three stages, narrow into single-seed feeders passing an ultra-sensitive photocell with 24 eyes. The machine has an accuracy level within two seeds per 1,000, PD learns from Elpack president Reuven Ascher.

The second, for fill by weight of certain products, is a computerized, multihead filler/weigher that has proven effective to ?30 mg (see PD, July '97, p. 78). Either way, following filling, the pouches are automatically heat-sealed.

Sticking it on
Delivered directly to Zeraim to obviate the possibility of diversion, the LIT disks are supplied on rollstock for application to the p-s label stock with product-specific information generated by one of two printers produced by Code Code. The labels are then transferred to an applicator supplied by Ariz, which also provides the pouch heat sealer for the special-order pouches; a thermal-transfer printer from Markem, also acquired through Ariz, handles the labeling operation.

Following these procedures and inspection, the pouches are manually cartoned for appropriate storage or shipment. Now packed along with the seed cartons are the polarizing lenses acquired from LIT.

That should open their eyes. And show that optimal security can come in small packages.