Two very disparate end users share at least one commonality: They both enjoy the richness of an affordable but luxurious starch-filled natural covering used as a laminate for their paperboard packaging. The first is a book cloth material for a set of ocean-aqua-blue cartons with a canvas-like feel for the Island Michael Kors fragrance line from New York City-based Estée Lauder. The second is an aqueous, acrylic-coated linen material covering a musical history of The Band, one of the most popular and influential rock groups worldwide from the years between 1968 and 1975, produced for Capitol Records/EMI Music Catalog Marketing, Hollywood. The musical collection takes the form of a hardbound, picture-filled book detailing the band's vocal adventures with bound-in disc holders containing a five-CD set of greatest hits and one DVD.

Both of these products feature distinctive, 100-percent cotton cloth covering materials that were chosen for the packaging to provide substantial durability, a quality appearance and an atypical look and feel. Produced by ICG/Holliston (www.icgholliston.com), the Kennett® starch-filled natural cotton book cloth wrap is used for Michael Kors, while the Arrestox®/Roxite® B aqueous acrylic-coated cloth covers The Band's musical pictorial/disk set. A recognized name, the Arrestox/Roxite B cloth is a “gold standard” for book binding and coverings and is extremely durable. The Kennett cloth is often used for an assortment of cover applications, specialty containers and for mechanical binding applications when packagers want to make a striking first impression. It's also 100-percent-recyclable, says Holliston. Another point of similarity the fragrance line and the CD/book musical history collection share is that they are both considered high-ticket items: The Island fragrance products are retail-priced starting at $40, and the book/CD collection sells for about $80. Thus, they require premium packaging that must convey a top-quality image.

In the case of the folding carton for the fragrance line, which also includes Waterfall Body Lotion, the intent was to create a feeling of “relaxed luxury” (see PD, Dec. 2005, p. 34), according to Estée Lauder, as imagery of an island captured in the packaging symbolizes a relaxed ease and indulgence. Most commonly used as a book-cover material, the Kennett 100-percent cotton linen weave fabric is thought to have its first use for the packaging of a major fragrance line with the Island Michael Kors line. With its deep, oceanic, aqua color scheme and four-color-printed island imagery on the interior, the carton uses the tactile quality of the cloth covering to convey similar visual and tactile esthetics of the designer's fashions.

Cartondruck USA (www.cartondruck.com) converts the cartons using .018 SBS folding carton stock that it laminates with a custom aqua color of the Kennett cloth material, which ICG/Holliston describes as a Grade B fabric in 54-in. widths. Weighing 380 lb/1,000 linear yd, the fabric has a degree of resistance to scuffing, abrasion and ultraviolet light and easily accepts foil hot stamping and blind stamping. For bottles in various sizes, including 150-, 100-, 50- and 30-mL, the front panel of each fragrance carton wrap is UV-offset-printed and hot-stamped with the designer's logo and fragrance name in silver foil. The ingredients listing and other mandatory copy on the back panels are screened in white relief. 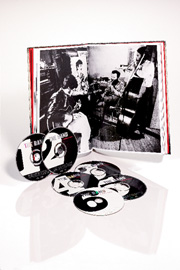 The Band, one of the most influential rock groups worldwide from 1968 to 1975, is featured in a pictorial book containing a five-CD set of music and a DVD in specially made pockets. The book is covered in a cotton book cloth.

Lawrence C. Maston, the new president and CEO of ICG/Holliston, says industrial customers usually purchase a wide range of his firm's specialty cloth products. “Packaging markets have discovered our materials for high-visibility applications in the luxury box, personal care, wine and spirit, and entertainment sectors,” he says. The materials are extremely durable, but are also easily decorated and can accommodate a wide variety of printing, embossing, foil-stamping and die-cutting. They can be easily laminated onto board, doubling the scope of possible applications. Strong brands have traditionally been communicated on store shelves by dynamic graphics and innovative shapes and sizes. More recently, brand managers looking for that extra competitive edge have turned to nontraditional choices, such as feel and texture. This is where we excel.”

Maston adds that the look and, more importantly, the feel of real cloth adds a degree of brand recognition and appeal that ordinary packaging substrates may not be able to offer. “As product development and introduction costs among packagers increase, there has been a shift from traditional mass-market advertising to in-store marketing, primarily to help contain these costs,” he adds. “This has increased the importance of 'high-value' packaging so that new products stand out on the store shelf. We notice that more designers and product managers are turning to cloth.

Michael Kors is a case in point. The designer reportedly loved working with the open-weave and tactile appeal of the Kennett material for the Michael Kors Island Collection,” Matson points out. Wishing to evoke tropical seas, the cloth in a lush turquoise blue was selected for the secondary packaging, which drove the brand image of the new line while advancing the underlying strength of the Michael Kors brand itself.

A typical application of the Arrestox Linen book cloth is The Band's gift book/disc combination. Released by Capitol/EMI Music Catalog Marketing in September 2005, The Band, A Musical History includes five audio discs and one DVD featuring rare live performance footage. Spanning The Band's early backing-band days, first for Ronnie Hawkins, and then for Bob Dylan and beyond, the musical history carries more than six hours of music and comes packaged with a 108-p. hardbound book with previously unseen photos and memorabilia. The release concludes the comprehensive restoration campaign for The Band's entire Capitol Records catalog, which also produced remastered bonus tracks and re-releases of its first eight albums. The series also features nine film clips of previously unreleased concert performances, a filmed studio jam and three songs The Band performed on “Saturday Night Live” in 1976, never before issued in their entirety. The comprehensive set documents the group's recording career up to 1976 and includes 37 previously unreleased tracks. Each of the discs fits within the protective, heavy-grade, last three “pages” of the bound hardcover book, inside individual foldouts that seat them within thumb-notched holders.

Printed and in part converted by by AGI Media, Inc., a MeadWestvaco resource (www.agimedia.com), which uses outside sources to handle the final assembly, the package and insets for The Band, a Musical History, makes their own earthy, rock 'n roll statement.

Textured folding cartons for the Michael Kors Island line have almost a canvas-like or denim feel, courtesy of a color-matched cloth laminate that’s pigmented in the same ocean aqua as the fragrance itself.

The outer book cover is completely covered with the cloth Arrestox Linen in a whopping 8.5-mil thickness. According to AGI Media, the package design for The Band, A Musical History, had to represent the members' images and needed to command a bit of mystery and the group's early rock 'n roll roots. So the outer wrap is offset-printed in four-color process plus a spot PMS red by AGI Media's facility in Melrose Park, IL, with a reproduction of a painting of The Band by world-renowned artist Ed Ruscha. The gray, black and sepia-toned color scheme has a misty, almost foggy quality. Though the aqueous, acrylic-coated cloth is available in 40 colors, white was selected and was delivered to AGI for printing. ICG/Holliston points out that the coating resists stains and mildew and can be also foil-hot-stamped, blind-stamped and screen-printed.

Inside, the book is filled with details, recollections, artitistc photos, recording dates and memories on a glossy stock, showcasing the band members, who began to collaborate as early as the 1950s. Their unique blend of sound and its evolution over the years, as well as reproductions of the group's album covers, posters and concert imagery, as well as listings for each song, are included in the large compilation. Another AGI Media facility in Louisville, KY, prints the text pages, while the sturdy CD and DVD pockets in the back of the book are converted and printed at AGI Media in Melrose Park.

Durability and ruggedness were also key packaging objectives for the book. Since the package is also part of a book that constantly opens, closes and folds, the spine and foldable portions especially had to resist nicks, white marks and wear. The marketer also wanted to extend the same durable, yet quality look and feel to the inner disc-holder pockets to create a cohesive design. The disc-holder pockets are made of a rugged .024 SBS board that bends and folds easily. The back panel of the book/package also displays a spot-glued placard label that lists the songs on each disc in black and red type on a cream-colored background.

There is no text printed on the front or the back of the book, except for the spine, which features the name of the The Band in white type and “A Mustical History,” in red. Reindl Bindery (www.reindlbindery.com) assembles the final package, which is later shrink-wrapped by outside sources in clear film to protect it. Printing of this outer, clear film is in white with the name of the group and contents in large block letters.

Maston says he has noticed a combination of packaging trends cropping up recently, which may point to the emerging use of the cloth materials. “Innovation is certainly there, but companies are dealing with a market that requires ever-increasing levels of differentiation. Tactile appeal is an often overlooked winning hand in the limited deck of cards available to designers,” he says. “Tactile materials can be a key differentiator that a brand manager or a package designer might be looking for.”

As the U.S. government's preferred supplier of passport material and supplier to more than 40 other countries, ICG/Holliston finds new ways to deal with creating innovative packaging. “When you listen to your customers and provide them with tailor-made solutions, you can often end up with a new product that you can expand into its own line and make available to others. Basically, if we don't have it, we'll make it for you,” Maston says.