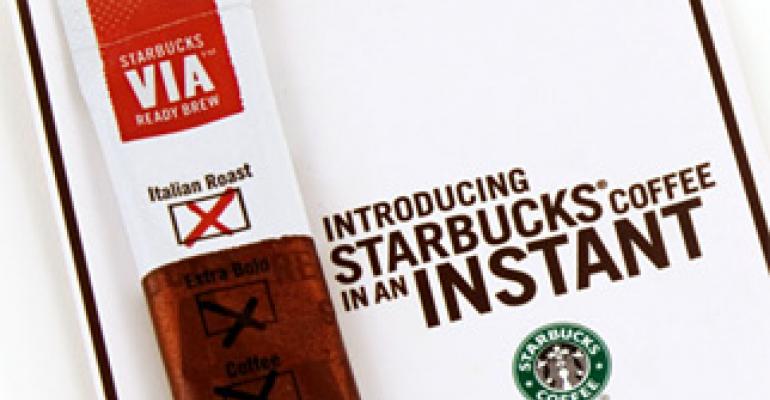 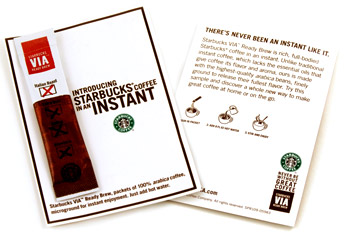 Recently, Starbucks Coffee Co., Seattle, broke new ground by introducing a sample pack of its new instant “ready-brew” coffee called VIA™. Currently available in the Chicago area and the Seattle area, the 100-percent naturally roasted instant coffee has no preservatives or by-products. “For more than 20 years, we’ve been looking for a way to guarantee our customers Starbucks quality coffee in an instant,” states a press release from the company. “Now, for the first time, coffee drinkers won’t have to compromise on taste or miss a valuable coffee moment with the introduction of the newest innovation from Starbucks—Starbucks VIA™ Ready Brew.”

Also available at its coffee shops as well as Target stores and Barnes & Noble Cafés that serve Starbucks in Illinois, the stick-packs contain Starbucks® Italian Roast or the nutty flavor of Starbucks® Colombia. They hit the streets of Chicago and Seattle on March 3 and were made available online at www.starbucksVIA.com in February. Londoners will also receive the samples beginning on March 25.

Each film/foil-laminated stick-pack contains enough instant coffee for to make one cup. Just pour the contents into a cup, fill it with 8 oz of boiling water and stir. A fleet of 15 Starbucks VIA Ready Brew vehicles rolled through Chicago to celebrate the launch, delivering on-the-go coffee lovers a sample of the new instant coffee glued to a promotional card printed with preparation instructions. The instant coffee is now also available in 349 company-operated and 174 licensed Starbucks locations in the Chicago/Illinois area, including the Chicago O’Hare International Airport.

As of presstime, Starbucks revealed no packaging details or suppliers, but PD sources hear that the coffee is reportedly being copacked in South America. Customers in Seattle and Chicago can also purchase a booklet of three stick-packs of the instant brew in Starbucks stores for $2.95 and a carton of 12 packets for $9.95.