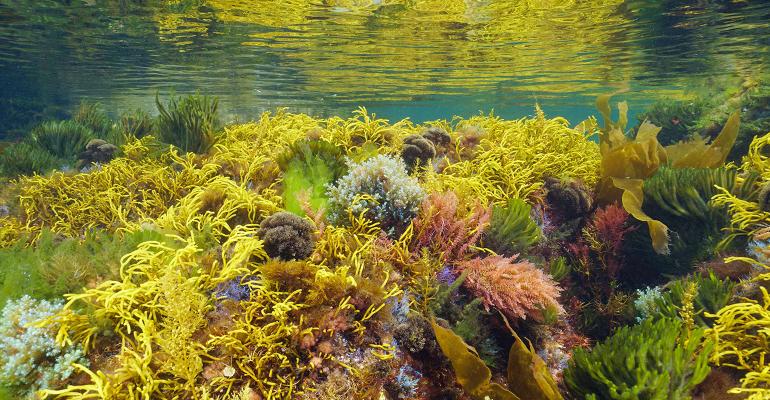 Plastics and packaging made from renewable resources like biomass are a hot-commodity market, but few have the potential of plastics sourced from one of the most abundant plants in the world, seaweed.

Research by seaweed economy tracker Phyconomy has shown that a vibrant seaweed bioplastics industry is emerging, and investors are taking notice; it reports that 36 startups have been found working on plastics solutions using seaweed biomass.

The seaweed bioplastics industry is a global one, with startups on four continents, but the UK is leading the charge at 10 companies. London-based Notpla, a sustainable packaging startup founded in 2014, is the frontrunner.  According to the website, “we create advanced packaging solutions made from seaweed and other natural materials as an alternative to single-use plastic.”

They make packaging disappear. Our 2014 MA/MSc Innovation Design Engineering (@IDE_RCA) graduates Pierre Paslier and Rodrigo Garcia Gonzalez of @notpla have raised £10m in their latest round of funding for their seaweed packaging. https://t.co/6tLEwjicSM

Scottish biorefinery Oceanium, whose tagline is “We’re here to Kelp the World”, has attracted more than $8 million in capital since inception in 2018. Its vision is to “integrate seaweed into our everyday lives for people health and planet health.”

Straws Made of #Seaweed Could Replace Their #Plastic Nemesis https://t.co/b8alWYqWiT @PlasticPollutes @LOLIWARE

As a crop that doesn’t use land, fresh water, or fertilizer, but instead takes up carbon dioxide and excess nutrients from the ocean, seaweed is billed as the biomass of the future, with applications beyond plastics in food, feed, pharmaceuticals, textiles, personal care, soil health, and packaging.

While these numbers are small, the upward trend is distinct. The number of seed rounds grew from 12 to 20, and the number of Series A or B jumped from 1 to 9, which shows the seaweed industry is beginning to break out of its hatchling stage.

The report also highlights the strenuous government regulations that hamper the growth of the seaweed industry outside of its traditional stomping grounds in Asia. Acquiring permits for seaweed aquaculture remains difficult for growers in Europe and North America.

Other highlights from Phyconomy’s newly released State of the Industry report:

“Seaweed is an important part of the earth’s ecosystem, and it has the potential to be a powerful tool to absorb carbon emissions and slow warming,” says Frances Wang, program manager of carbon dioxide removal for ClimateWorks Foundation, which supported the report. “Phyconomy's report illuminates how resources are flowing to this burgeoning industry, which has important implications for the development of seaweed as a climate solution.”

Addressing one of the top priorities identified by Ocean Visions' Roadmap for Macroalgae Cultivation and Carbon Sequestration, Phyconomy has built the world’s first open-source, open-access database of seaweed companies and funding that covers the entire value chain, tracking more than 1,000 companies globally.

Breaking News in Flexible Packaging
May 16, 2022