Compostable vs. recyclable: Which is better? 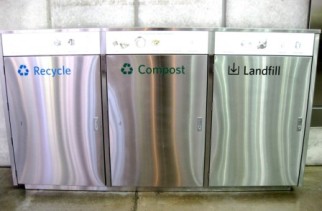 This is very true, and I think my question has now become, which is the more sustainable of the two options: recyclable plastics, or biodegradable plastics? We already know that incineration is not the best method for disposal. While it is often referred to as “waste to energy,” it might as well be “waste to air pollution” because it adds to the carbon emissions (already a problem) and introduces other toxins to the atmosphere.

I have always believed that recycling is the best way to go because it makes the most of the energy consumed to make the product. Composting is a great option, and is appropriate at times, don’t get me wrong. But let’s face it–it takes much longer and much more energy to make the majority of our plastics than the time and energy it takes to use that plastic. Think about a plastic cup: manufacturing the cup, and using the energy to make it, takes longer than it does to drink a soda out of that cup. In order to not waste the energy expended in manufacturing, the longer the life of the product, the better. It doesn’t make sense to throw out a pair of shoes that are barely worn, and same goes for a plastic.

Having the option to use recycled plastic replaces the need for virgin plastic made from virgin materials and more energy. Composting doesn’t replace the need for virgin plastic–it simply gets rid of a plastic product after one use. Rather than already having the material from which you can make your next plastic product, you will have organic compost, with which you can fertilize a garden.

Recycling still takes energy, which composting does not, but solely composting limits the end-of-life value of a product too much to give it precedence over recycling–especially when composting of biodegradable plastic still isn’t available on a large scale. Also, making a new product requires energy anyway, so the output of energy to recycle a product would be matched by that of a new product regardless.

One of the drawbacks to recycling is that eventually the plastic material will break down from being reused and recycled so many times and will face another disposal method. This is where composting would be the best option. A product with the longest life and most harmless end would be one that can be recycled, recycled, recycled, recycled, and finally composted when the plastic is too weak. I’ve seen bottles that are both recyclable and compostable (not easily so), but in order for that to be effective, that plastic needs to be everywhere, and still needs to be easily compostable in the end.

Composting and recycling both have their benefits (and their drawbacks) when compared to each other. What we need is for them to work with each other so that we aren’t forced to choose, and our habits can be as positive as possible for the environment.

Which do you view as the future of sustainable packaging?