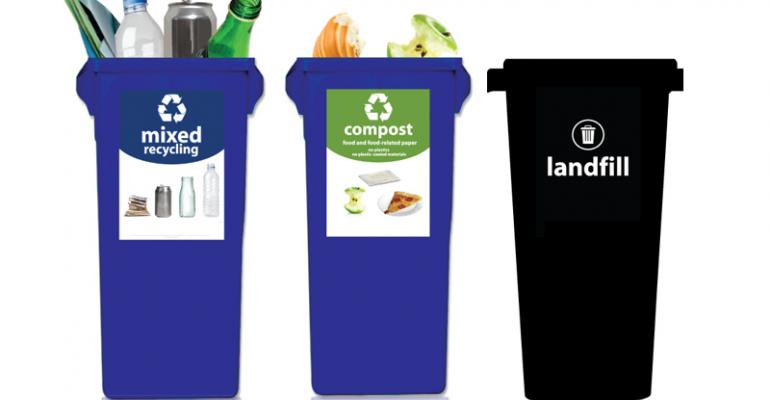 Recycling should feel good and most importantly, be easy. Reducing waste, saving energy, helping the planet—these are all things that most of us want to do—whether we are packaging engineers or just plain old consumers—but struggle to when the process is difficult or unclear! But in a system full of complicated rules and tiny numbers in often hard to find triangles, recycling often turns into a frustrating process, ending in a blind toss into what we hope is the right bin. Even as packaging experts we are sometimes unsure of which bin, is the right bin!

To help break down these barriers, not-for-profit Recycle Across America (RAA) distributes standardized recycling-bin labels, designed to reduce public confusion about how to recycle. The labels clearly point out what can be placed in a bin, from plastic only to mixed recycling to compostables and yes, even the dreaded landfill. Using simple clear imagery and minimal copy these labels could be understood by someone who doesn’t even speak our language!

TerraCycle has partnered with RAA for the launch of their Recycle Right! social action campaign, which features advertisements, videos, and tips on recycling in hopes of doubling the amount of standardized labels in use to 1 million labels deployed on bins nationwide. The campaign is kicking off in conjunction with the premiere of “Human Resources”, a new show about the world of TerraCycle from Participant Media.

Consumers are the first step in the recycling process, so clarity about how to get things started is important. When people don’t know what can be recycled or where to put it, waste streams often end up polluted with trash or intermingled recyclables. Costs increase and time is wasted as processors are forced to sort through waste for the materials they can use. This discourages sustainable practices; if the cost of recycling is greater than the value of the materials, it just won’t happen.

Meanwhile, daunting rules lead many consumers to throw up their hands and just throw everything in the garbage. According to the EPA, Americans recycled only 38% of aluminum packaging and 34% of glass packaging in 2012. As a result, landfills are filling up with material that won’t break down for decades and that could have easily been recovered and reused.

Confusion is also burdening businesses, organizations and schools who want to reduce waste and recycle. Green consultants or sustainability administrators end up spending much of their time trying to increase effectiveness of recycling programs and decrease waste-hauling costs. Clearer labeling on bins would simplify recycling for everyone and allow these groups to focus on broader sustainability initiatives.

Some big-name adopters of RAA’s labels include NBCUniversal, Procter and Gamble manufacturing and Hallmark. Additionally, over 2,000 K-12 schools in the US have taken them on. The results? According to RAA, standardized recycling labels help increase recycling more than 50% and significantly decrease the amount of trash or incorrect recyclable thrown into recycling bins and polluting that once valuable material.

Implementing bin labels in the office is a first step anyone can take to improve company recycling practices. But packagers could potentially play a larger role in organizing the chaos of the recycling system. Right now, a lack of consistent labeling or clear directions makes it difficult to determine what to do with certain waste; food containers, different types of paper and the range of numbered plastics all lead to puzzled customers.

Some efforts have been made to demystify that little green triangle. The On-Pack Recycling Label launched in the UK in 2009, aiming to provide clearer instructions and keep trash out of recycling streams. The labels, which have been adopted by about 150 brands, indicate whether each part of a package is recycled widely, only in certain areas or not at all. A similar effort by the How2Recycle project has been offered to US businesses since 2012. And customer surveys have shown that 80% of customers who saw the How2Recycle label on a package gained a more positive impression of that company.

Figuring out where to toss our trash shouldn’t be stressful. People want to reduce their impact on the planet, and when a company makes it easy for their customers to go green, everybody comes out happier. Processors win, consumers win, the planet wins and the price of recycled materials goes down meaning packaging designers and engineers can finally convince the other stakeholders at going to post-consumer waste packaging makes sense!