Packaging with a repurpose for the greater good 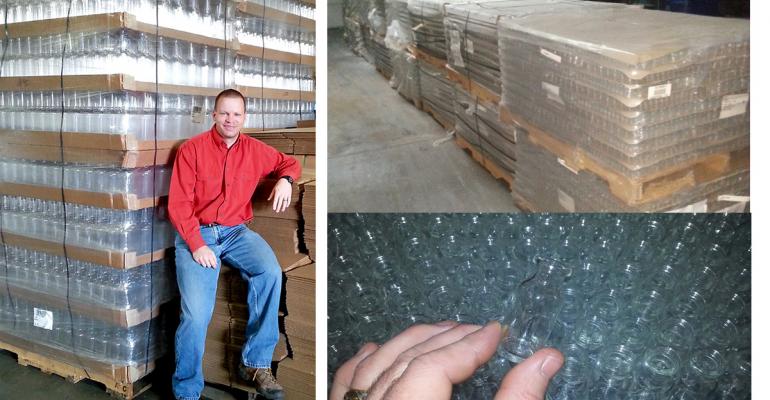 Damon Carson of RepurposedMaterials poses with packaging that’s available for reuse including, on the right side, a fresh arrival of 16 pallets of like-new 10mL glass vials.

What can you do with 5,000 plastic whisky bottles or 288,000 unused 10mL-glass pharmaceutical vials? RepurposedMaterials founder and president Damon Carson debriefs us on the packaging component of his operations that find a home for unwanted, but usable items.

Can you use 5,000 32oz plastic whisky bottles? Or 288,000 unused glass pharmaceutical vials? If you can, I’d suggest that you contact Damon Carson, president and founder of RepurposedMaterials, a company founded in the fall of 2010 in Denver on the second priority (right after Reduce) among the foundational 4 Rs of sustainable packaging: Reuse. His company has since opened operations in Chicago and Atlanta and hopes to open additional facilities in Texas and in eastern Pennsylvania or New Jersey this year.

All locations do exactly what you’d expect, acting as a bridge to connect those with unwanted, but usable things with those who can reuse such things. RepurposedMaterials is proof positive that one company’s trash is indeed another’s treasure.

What kind of things does he accept? Carson responds with his mantra: “Anything that’s generic, versatile and adaptable.”

His broad definition fits things from fire hoses reused as dock bumpers, rubber conveyor belts reused as flooring in a shop and reuses for snow fences, synthetic turf and, last but not least, packaging. Carson guesstimates that packaging—such as totes, bulk bags, barrels and bins—comprises 10% to 20% of the inventory.

“We accept a lot of plastic pallets,” he notes. There’s also related items used in packaging, such as reusable conveyor belts from food, beverage and shipping operations.

Packaging includes the aforementioned 5k bottles and 288k vials, which are real examples. “A recycler had accepted the glass vials from a customer that intended them to be ground up for recycling,” says Carson. “Instead, the recycler contacted us and we accepted the 16 pallets of vials. They could have crushed them, but how sad would that have been because they have value as-is. Recyclers are pretty aware of what we do.”

At this point he has no idea where those vials warehoused in Chicago will end up, but he does have a suggestion. “I kind of laugh about it, but I think a good candidate for repurposing those is the marijuana industry here in Colorado.”

During our mid-February interview, he was considering accepting 13 million—yes, million—baby food jars.

If you have anything that may fit the above “Generic, Versatile and Adaptable” rule, we encourage you to contact Carson at [email protected] or 303-321-1471. He comes across as a pretty flexible guy who would prefer to make something happen than not. Do know that not having proximity to one of their facilities is not a deal breaker. “We’ve done deals in southern California, Seattle and Rochester, NY, just to name three,” Carson says. Deals are a win-win for all parties, diverting such things from landfills and giving them a new life with someone who sees their inherent value for a repurpose.

Deals can range from drop-off to pick-up and from taking things off your hands to paying for them with delivery included. It depends on what it is and the quantity. One tip: He prefers it be a standardized waste stream. “The more it can be standardized and presorted, the more options we have for finding a repurposed second home for it,” he says.

Lastly, you can also check the repurposedmaterialsinc.com website for items you may consider “adopting.”