Designing packaging for second life implies reuse in a very permanent sense, rather than just refilling a plastic water bottle a few times before tossing it. This concept has the potential to entirely change the game for reusable packaging-as long as the trend can gain some momentum. Some concepts, explored as early as the 1970s, already have faded, but design for reuse is picking up steam once again and I am excited to see if it can reach its potential. Here are a few cool examples:

The Heineken WOBO: This beer bottle was designed to be reused as a brick; with a square instead of a cylindrical build, the bottles could be stacked together, and with circular ridges on the sides, they wouldn’t slide off each other. Instead of being called a beer bottle that could be used a brick, it was dubbed “the brick that holds beer.” It’s no longer around, but it was certainly ahead of its time and led the way for reusable packaging design.

PUMA’s Clever Little Bag: The bag is actually a shoebox that doubles as a shopping bag to carry the shoes out of the store and, later, tote around whatever else you’d like- groceries, books, clothes and more. It also reduces the amount of cardboard required and makes a plastic shopping bag obsolete. 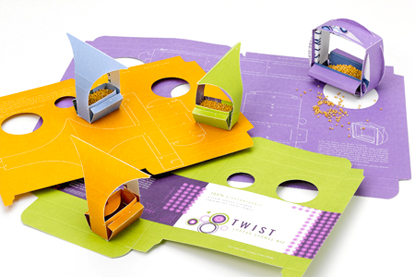 Twist sponges and towels: Twist makes sustainable and reusable sponges and towels to wash dishes, and the packages can be made into bird feeders and other items. Nothing goes to waste. The instructions for transformation are included.

Celery Design and Lemnis Lighting Light bulb Lampshade: When you take your light bulb out of the packaging, you can turn the cardboard packaging into a trendy, modern lampshade. Design for reuse, and design for your home or office.

I find these inspiring for the packaging world, and I really hope this trend gains more ground and stays, because it could make quite an impact in the area of waste and reuse, especially for plastics that are harder to recycle because they aren’t as widely accepted by municipal recycling. Think: #3-7 plastics; items like plastic tubs and containers (yogurt cups, spreads tubs) are great for recycling and reuse because their plastic is generally quite strong, but it’s not so easy to find a place that will take them.

TerraCycle already has upcycled tubs with Clearwater Nursery by using spreads tubs as planters. Once people were done with the small planters (if ever), they could send them back to TerraCycle for upcycling once again. We’ve also made children’s plant and herb kits with Stonyfield yogurt cups.

It is partly up to manufacturers and product designers because consumers need to know that they can reuse the packaging and how to do it. People can easily reuse these rigid plastic containers at home by collecting coins in them, using them for crayons, for food, buttons-hundreds of items.

But how can we make people more likely to do this? What is standing in the way for reuse, making so many containers appear in the trash? Brands like Method www.methodhome.com have been designing sleeker packaging for their products so that people are more likely to want to keep them around the home. While this may seem to be a problem for branding, the consumer may start to recognize your packaging by the cool shape or the cool artsy design instead of the brand name plastered everywhere, and it also can lead to a new, more positive form of brand recognition.

Putting instructions on the box could be one of the most blatant reminders of all-not only does it give some help for reuse, it also essentially instructs the consumer to not throw out the packaging at all.

I know there are more ways to integrate reuse directly into packaging design. What neat packages have you seen? From a manufacturing perspective rather than a recycling perspective, what does this challenge look like? What are the considerations for integrating this?