Where, how and why ocean plastic is being used as packaging feedstock 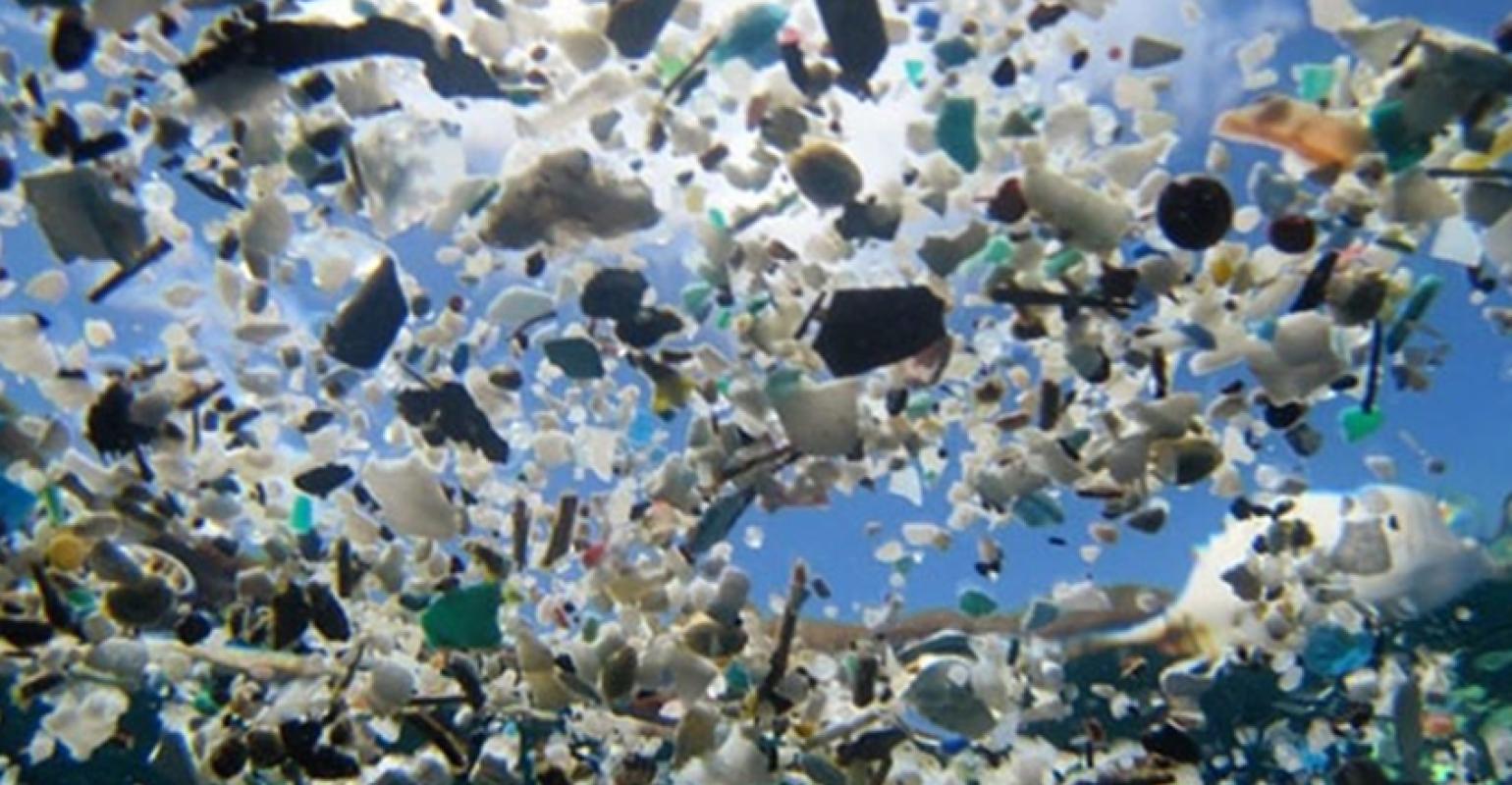 More brand owners are finding uses for plastics that are recovered from the ocean.

For those of us working in the sustainable materials management space, we’ve understood for a long time that plastic pollution in the world’s oceans has been a serious problem. But, for many, the concern reached a zenith when the World Economic Forum shed light on the projection that, by weight, there will be more plastic in our oceans than fish by 2050, as cited in the New Plastics Economy Report.

After a little more than a year since the report’s publication, we’ve seen a flurry of activity among consumer packaged goods (CPG) companies involving ocean plastic. CPGs have developed numerous initiatives to source recovered ocean plastic as an input for packaging. And several apparel companies have engineered ways of using ocean plastic in textiles for clothing and shoes.

Both strategies have important challenges worthy of examination, but also show how multinational companies are interpreting circular economy principles in new and more diverse ways.

Parley for the Oceans is one organization that has served as a bridge—from stakeholders concerned with threats to marine biodiversity and conservation, to the private sector, responsible for both generating plastic material that escapes into the environment and providing demand for recovered ocean plastic as an input for new products and packaging.

One recent partnership has been between Parley for the Oceans and Adidas—where they designed the Adidas UltraBOOST Uncaged shoe made with a knitted upper comprised of 95% recovered ocean plastic and 5% recycled polyester. While the first 7,000 units were released on Nov. 15, 2016, Adidas Group Executive Board member Eric Liedtke explains that, “We will make one million pairs of shoes using Parley Ocean Plastic in 2017—and our ultimate ambition is to eliminate virgin plastic from our supply chain.” 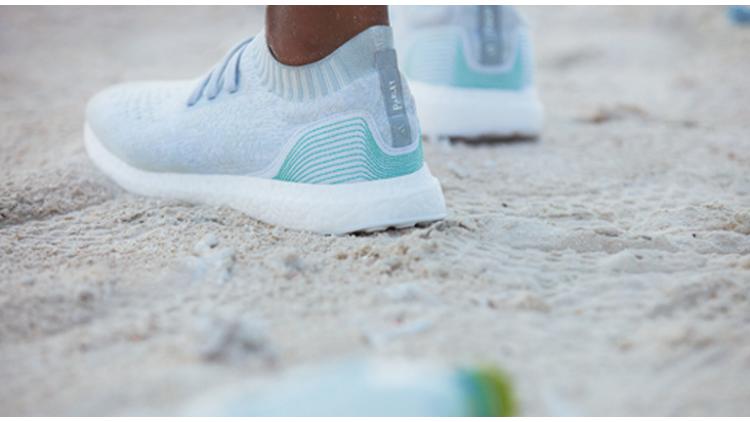 But Adidas isn’t limiting recovered ocean plastic as a feedstock material for footwear. The company also worked with Parley to create the first jerseys made of 100% ocean plastic for football teams Real Madrid and Bayern Munich. Munich player Xabi Alonso (left, in red) highlighted that, “Wearing a [jersey] that is made from recyclable ocean waste is something I’m very happy about as it’s a fantastic opportunity to raise awareness about the need to protect and preserve our oceans.” 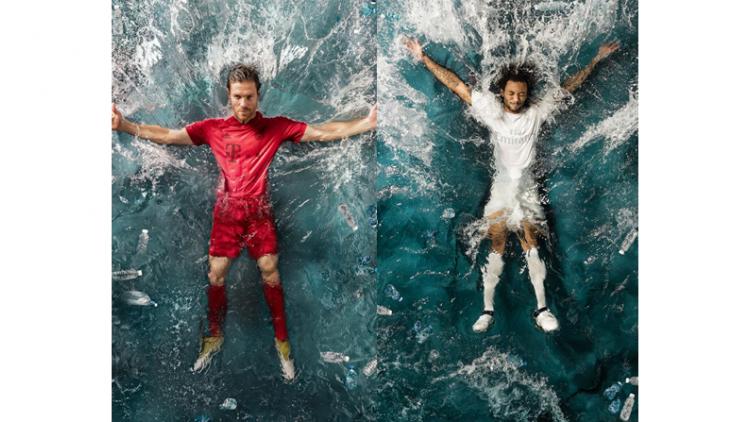 Indeed, raising awareness about sustainability in general and ocean plastic pollution specifically is a chief benefit of using recovered ocean plastic in new products and packaging.

Method, People Against Dirty, was one of the first companies to use recovered ocean plastic in its soap bottles in 2012 and highlighted the importance that social awareness was to the packaging design. Parham Yididsion of Envision Plastics, method’s recycling partner, explains that it was a project where they could actually make a difference—and make a point.

This emphasis on awareness and activism emerges in method founder Adam Lowry’s discussion of the project as well. He elaborates that, “We know that only a small amount of plastic will be taken out of the ocean through all of these bottles. We know that’s not the solution. But, we also know that we can have a much bigger impact if we start to change people’s mind about their role in protecting our oceans.” 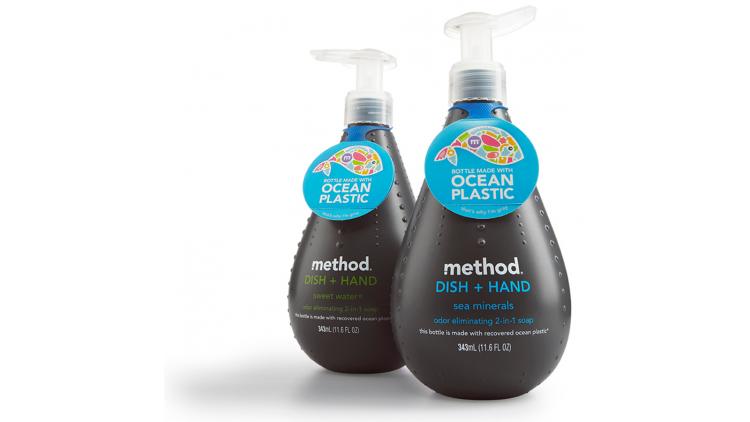 Much like method’s conventional soap bottles that use 100% post-consumer recycled polyethylene terephthalate (PET), the ocean plastic bottles designed out the need for virgin plastic, reducing the carbon footprint by 70%. Since method first broke ground in sourcing ocean plastic to produce plastic bottles, the industry has been innovating to increase the percent of ocean plastic in a given resin mix.

Procter & Gamble, for example, is releasing a limited run of Head & Shoulders shampoo bottles this summer in France at Carrefour stores. P&G’s black high-density polyethylene (HDPE) is unique in that, unlike many other ocean plastic packages, other polymers from the beach plastic have been sorted out. In addition, P&G has raised the proportion of ocean plastic in the formulation up to 25%. More generally, the CPG company announced that by the end of 2018, it will have half a billion packages in Europe with at least 25% post-consumer recycled content, among its hair care portfolio, including Head & Shoulders and Pantene. 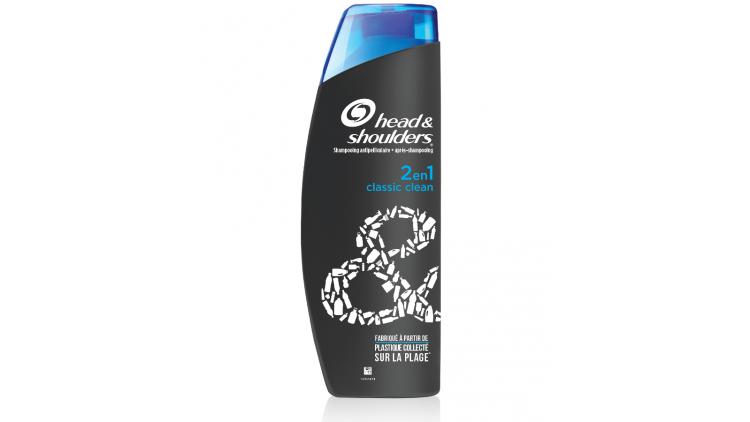 One downside to packaging that uses recovered ocean plastic is that the plastic’s color often results in a dark grey when processed. From this point, many companies will then use dark or black colorants to make the package appear more uniform and provide more juxtaposition with competition on-shelf. However, when on the sorting line at a materials recovery facility (MRF), the near-infrared (NIR) sorting technology is not able to distinguish between black polymer types. The Assn. of Plastic Recyclers (APR) illuminates in its authoritative Design Guide that, “There is no mechanical property inherent in black HDPE that makes it unrecyclable. The problem lies in sorting and the physics behind polymer identification.”

Another challenge that P&G’s vp for global sustainability Virginia Helias highlights is the limited quantity of beach plastic and much higher expense due to the complex supply chain of its collection and processing. Critics of ocean plastic use in plastic packaging will point out that this elaborate supply chain also likely means that the environmental toll of transport involved negates some of the benefit to the material recovery.

Yet, conservationists are quick to counter that if the material is being collected by volunteers from beaches or waterways already, a second-life as a package or textile is certainly a better outcome than a landfill or incinerator.

Nevertheless, companies using recovered ocean plastic in large quantities, like Adidas, incentivize efforts to continue removing plastic from the ocean as it helps to coalesce a reliable end market for the material.

Dell, which is using 25% ocean plastic in its 100% post-consumer recycled content laptop trays, stresses this is a deliberate aspect to its sustainability initiatives. Dell describes the initiative as the “first commercial-scale global ocean plastics supply chain.” Moreover, the computer technology company, “will convene a working group to address ocean plastics at scale.”

In due course, more companies will likely continue to incorporate ocean plastic as a feedstock once a reliable and larger stream of plastic is being recovered from waterways. As Parley for the Oceans founder Cyrill Gutsch clarifies, “At this point, it’s no longer just about raising awareness.”

Charlotte Dreizen, now a project associate for the Sustainable Packaging Coalition, joined GreenBlue as an intern in March 2016, focusing on the development of compost-related programs. Assisting with the creation of the Sustainable Composting Collaborative and research efforts to quantify the value of compostable packaging, she contributes experience from leading food waste research efforts, as well as supporting residential and higher-ed composting programs.