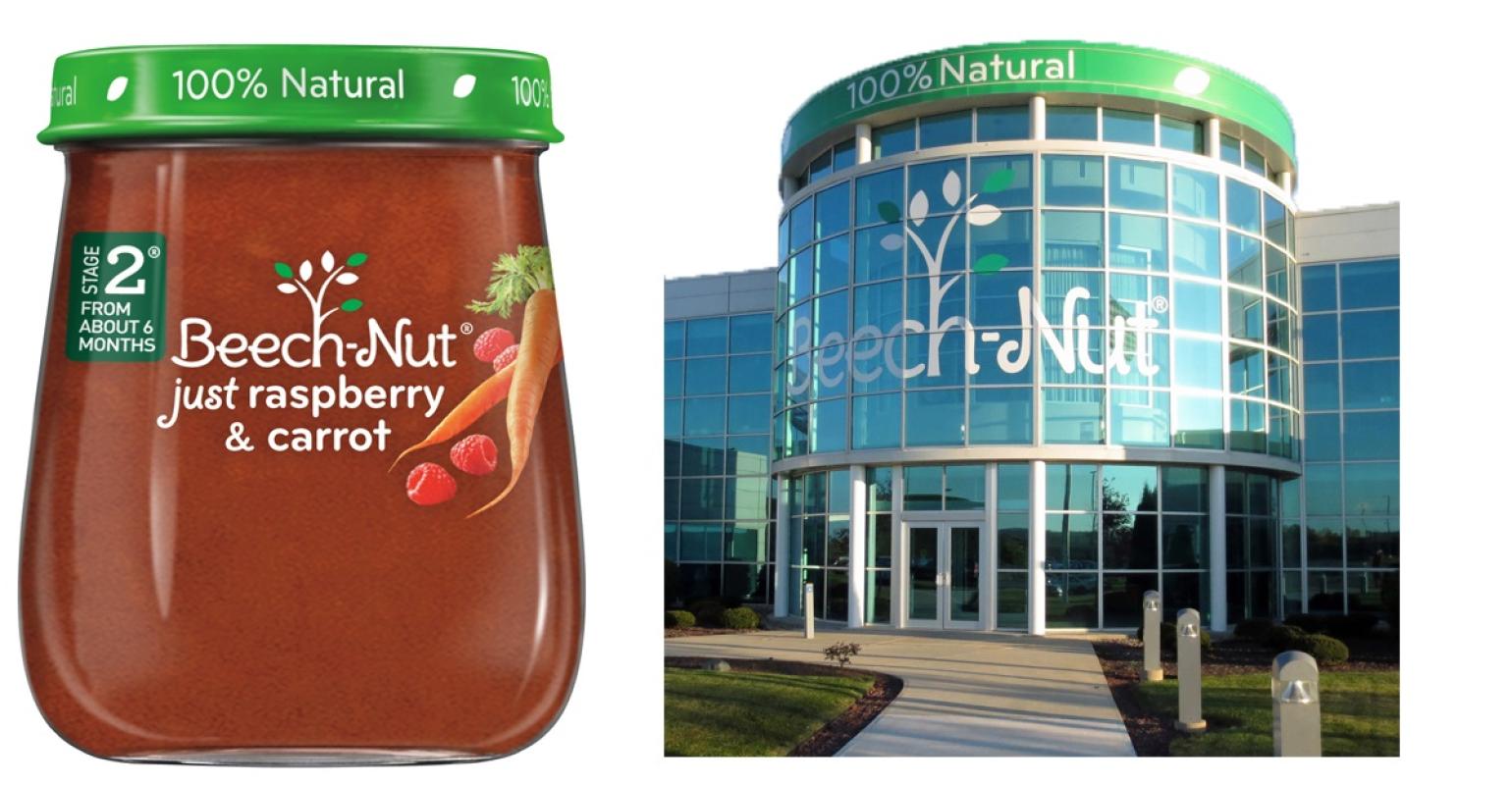 Minimal ingredients and processing in making “real food for babies” combines with consumer-driven packaging that hits on all brand points naturally.

When Beech-Nut decided to remake its baby food, it went all in, breaking out of the mold by introducing a disruptive line of “real food for babies”—the product’s tagline—that redefines what baby food is all about. The products launched spring 2014 are not your mom’s baby foods, and are as much “real food for moms” because that’s who helped drive the product and packaging development. What those Millennial parents helped guide into fruition was a new, 40-product—and growing—line of reformulated-from-scratch, 100% natural foods for babies. Products are filled, sealed, labeled and multi-packed in distinctive packaging that is itself designed-from-scratch, also with consumer input. That’s all done on a new production line inside a plant that, at only four years of age, is a mere toddler itself, albeit it a sprawling one.

Yet it all started with 2,000-plus moms in qualitative and quantitative consumer studies conducted over the course of more than a year, which included market-store tests and aisle intercepts.

What’s going on here? Who could be more time-strapped then moms with infants and toddlers?

“Our research uncovered the fact that the reason why they were making it homemade is because they desired something else from their baby food that wasn’t being met within the category,” explains Jodi Breuer, marketing director. Beech-Nut had to drill down to uncover that nugget because it was obscured by the fact that, due to the rise of value-added formats like pouches, price per ounce of baby food had risen to offset that decline.

The new products’ flagship positioning at Beech-Nut redefines what the brand owner is all about with a newfound relevancy that positions the 123-year-old company for growth.  It’s no wonder the 14-month from-scratch effort was referred to internally as the “Transformation Project.”

“The products are aimed at the four million infants born yearly in the U.S.,” says Andy Dahlen, vp of marketing and sales. “Their moms seek ‘real food’ with  ‘clean’ ingredient labels. They want to know what’s in the jar and where it comes from.” About one-third of the volume had abandoned the category entirely, Beech-Nut reports.

“This new flagship for the brand is unlike anything we had previously,” says Dahlen. That included the packaging. “From a packaging standpoint, we knew that we needed to be disruptive and bring something different to what’s been there in the past,” he says.

A honey of a jar

At the center of the new packaging is the jar, a design the company calls a “honeypot,” which is a dramatic departure from what has been used both by Beech-Nut for 50 years and by other companies in the category.

“The silhouette of baby food jars have essentially been the same for decades,” says Dahlen of the traditional short, rounded jars. “We could have filled those same jars with these new products, but because a lot of moms had left the category, we had to communicate to them that this is something different.”

The taller honeypot shape offers tapered sides that angle the label toward consumers to enhance the visibility of the branding.

The jar design was a joint effort between glass manufacturer Owens-Illinois and Bluedog Design LLC, the latter of which handled the entire packaging graphics design, including a new corporate logo.

“This is a fairly new relationship,” says Dahlen of the glass vendor. “OI brings a lot of innovative capabilities to the table so they have really been a partner.”

“I had never in my career had such collaboration,” offers Breuer. “OI was passionate about helping create this ‘next new design’ that was co-created with moms along the way and with Bluedog’s help.”

Dahlen says that it was a challenge to create a jar that hit on all aspects, a process that required about one-third of the overall product/project development timeline. “That included label and closure, all of which would have to work on our production line at the required rates,” he explains. This involved Beech-Nut’s engineers and internal team and OI personnel.

With other packaging formats available for baby food, why glass?

It’s also recyclable—“that’s important particularly for Millennials, who are the ones having babies,” adds Breuer.

She says the jar not only looks nice, some moms call it “cute—and it really fits nicely in your hand.” Also, with a wider base, “it is designed to allow users to spoon the last portions from the bottom,” she says, an aspect that rides the current tide of food waste reduction. The bottom of the jar is designed to fit snugly into the top of the closure to optimize stacking. The jar is also is microwavable.

The 4.25-oz size was selected as the volume that would deliver two servings of fruit or vegetables to the Stage 1 and Stage 2 users; it provides one serving for Stage 3 users.

Beech-Nut has had larger jars before, such as 6-oz jars in the Classics line. “However, we have not had this shape of jar that affects how things are gripped and a lot of other aspects on a production line,” Dahlen points out.

The polymeric label graphics were designed in concert with the jar and were driven by the fact that moms not only want their babies' clean, they want their babies’ food labels to be squeaky clean, too. The label can be only as “clean” as the ingredient statement, which is why Beech-Nut went with a “less is more” route on the formulation side that’s reflected in the minimalist ingredient label.

“Moms felt that the existing offerings in the aisle were runny and included added water, that many had added ascorbic acid, which wasn’t something the homemakers added to their own prepared baby foods,” says Dahlen. “They were looking for a product that had a very clean label.  It was appealing to Mom, who can see the vibrant colors and texture of the product. We wanted to maximize the ability for mom to see the product and its beautiful color and texture showcased through a transparent label.”

The polymeric, no-label look is new for Beech-Nut, which has long relied on cut-and-stack paper labels for baby food.

The company declines to identify the vendor of the pressure-sensitive labels except to note that “it was a supplier that we had experience with and felt was a very strong on that aspect,” Dahlen says. The labels are applied in the plant using a new labeler (see Beech-Nut optimizes new packaging line).

Last, but not least, is the final component for the primary packaging, the closure, which Dahlen singles out as “something that would also help differentiate the products. We looked at different colors and felt that the green twist-off, vacuum top closure from Crown Holdings best communicated the product positioning.”

As with the logo, the green color of the closure ties to the company’s commitment to environmental sustainability and green living. The printed words “100% natural” are repeated five times around the closure perimeter. The product shelf life, which is 18 months compared to the Classics’ line 24 months, is laser-etched on the rim.

Top-of-closure copy includes the Beech-Nut logo and bilingual opening instructions and, as a bow to the no or minimal-water added formulations, carries the admonition to “shake well, separation is natural.”

The secondary packaging is also a departure for the company. The new shrink-wrapped 2x5, 10-count tray offers a 3-lip, 1-side open design and is shelf/retail ready—also a first for Beech-Nut. The less-than-half-height tray is shelved with the no-flap side facing out to enable easy access to the jars without a flap needing to be cut, which Dahlen claims delivers on a push from retailers. “That makes things a lot easier on in-store labor,” he says.

Some minor graphics changes were also made, he adds. Beech-Nut felt the new format was such a good idea that that the company’s Classics line was also converted to the same retail-friendly tray format.

Retailers have responded favorably to the products and are excited by the sales figures, according to Beech-Nut. “We’ve had several retailers that are seeing incremental growth,” offers Dahlen. “The products are bringing moms into their aisles who were not there before. From a quantifiable standpoint, we’ve seen strong performance that’s a reversal of trends for Beech-Nut. That’s also important for the entire purees segment in glass jars and tubs, which has been in long-term decline. Our business is starting to grow.”

And isn’t growth what baby foods are all about?