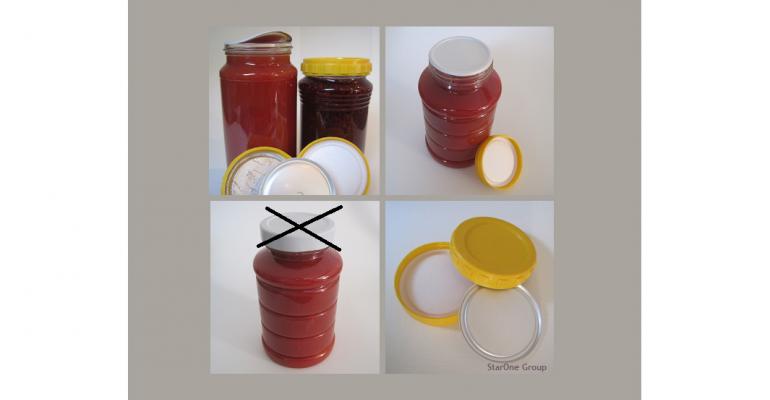 A new Smart-Seal 3D Hot-Fill Vacuum closure technology can be molded in polypropylene or high-density polyethylene plastic to fit any size glass or thick-wall PET jar with a unique, peelable aluminum laminate induction seal. The easy-open, screw-thread design can replace the current metal one-piece vacuum closure that has dominated the hot-fill packaging industry for decades, according to the inventor, Aron James of the StarOne Group in the U.K. James says the patented, closure hot-fill system is now available for license to plastic closure manufacturers and sealing wad producers.

This new development for hot-fill closure sealing technology employs all three container sealing edges: along the outside edge, across the top edge and down on the inside edge of the jar.  The actual surface of the sealing area becomes two to three times greater than a traditional closure, according to James.

“My invention increases the surface of the seal area around 100 to 200 percent compared to just sealing the top surface edge,” says James. “With this new three-dimensional closure and seal technology, it is possible to have a superior product to a one-piece vacuum metal closure for around the same price with additional benefits.”

One of the benefits is that the jar can be hermetically resealed by the consumer due to the internal wad that remains in the closure even after the tamper-proof security, peelable aluminum induction seal is removed from the jar, he says.

“Now any company producing plastic injection molded closures can compete very competitively in this market because plastic closures can be made at extremely high volumes at low costs,” James explains. “With this invention, plastic closure manufacturers need only buy in the 3D sealing wad and place it into the closure, which allows them to compete competitively against major metal closure manufacturers with only a modest investment.”

This is a different take on the Smart-Seal 3D Closure Technology, which was developed for industrial chemicals.

With recent and on-going concerns over food safety  related to issues about PVC-sealing compounds related to  (ADC), (SEM) and (BPA) bisphenol-A (see http://www.packagingdigest.com/shipping-containers/bpa-packaging-defying-pressure),  Aron James feels the timing is perfect to release this technology.

“New legislation requires that metal vacuum closures can no longer use the flexible sealing chemical substance that they have been using in the past because it is banned from food production due to long-term health risks of BPA,” James points out. “Food producers are looking for new technologies that will insure safety without any on-going or uncertain risks for their brands.

“Many of them are requesting better packaging solutions. Food producers around the world are looking to replace glass containers through plastic containers and closures to reduce weight and breakage along with improved tamper-proof security.”

StarOne has designed and developed the Smart-Seal 3D closure sealing technology and is looking for different companies to be involved through licensing the closure system in countries throughout the world.

“We are talking to large food groups in hot fill who are interested in this new technology to review and change their existing systems over to when it becomes available,” says James. “It should be commercially available in the food and beverage industry in the latter part of 2015.”

Aron James sees the Smart-Seal 3D closure technology as a platform for a broad range of products in beverage, food, personal-care, pharmaceutical and chemical industries.

See also these other articles on StarOne Group’s packaging innovations:

The Drop-Top dispensing closure for bottles,  which is a dispensing closure and is newly patented revolutionary container closure with a delivery system that features an internal multi-cavity design that stores liquids, powders, gases, granules or tablets.

A patentable package design to make hair color and other formulations convenient via a mess-free, 2-compartment system contained inside a squeezable tube that allows the dispensing of highly sensitive liquids into each other for dispensing at the time of use.

The Smart-Seal 3-D sealing Closure and Wad system, which is for the Smart-Seal 3-D Closure technology for all types of plastic containers that are extruded blow molded and have uneven dimensions and wall thicknesses throughout the manufacturing process.