A twist on multipacking turns up cannery’s capability 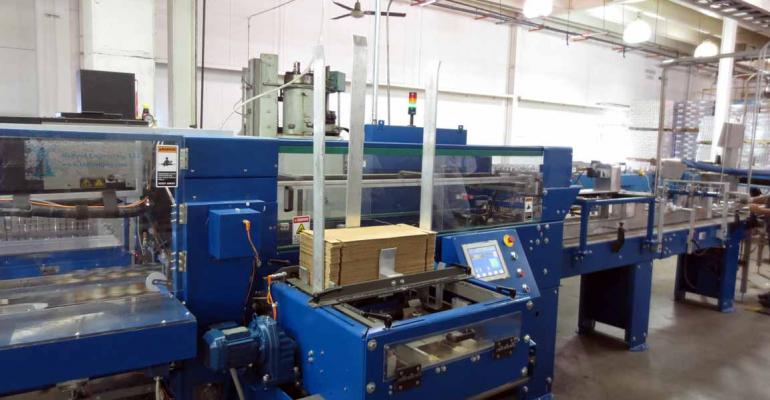 Sometimes the best ideas are the simplest, which is why Merrick Pet Care Inc. beefed up its production operations in Hereford, TX, the self-proclaimed cattle capital of the world. It did so using a Holland Engineering multipacker equipped with a unique, patent-pending “New Twist” metering system. Merrick’s New Twist system is the second of its kind in the world; the first was installed at a New York bottler shortly before the 1Q2014 installation at Merrick.

What set things in motion was a directive from Merrick’s marketing department for a new, retail-driven shelf-friendly format: A 12-pack, shrink-wrapped tray of cans that’s only two cans wide. The new 2x6 format would yield the same tray count onto a shelf facing that was one-third less that for the traditional 3x4 multipack. On space-constrained retail shelves, that one-can reduction makes a huge difference, enabling three 2x6 packs, or 36 cans, to be shelved in the same facing as previously housed two 3x4 facings totaling 24 cans.

“We transitioned our can tray configurations to allow our retail customers the ability to shelve a greater variety of our category-leading Merrick grain-free recipes for their shoppers,” says Mark Sapir, vp of marketing. “We are continually looking for new ways to improve our offerings to customers, pet parents and ultimately their pets.  Our upgraded multipacking capability is another example of Merrick doing what a leader does.”

The change to the new tray configuration began in late February starting with its new grain-free Merrick chunky cans. “The transition is expected to be completed across all our product lines early next year,” Sapir adds.

Responsible for seeing that marketing’s vision became a reality on the Merrick production floor was Michael Myers, cannery plant manager. Myer’s Plan A was to upgrade the plant’s multipacker, a Holland Engineering Vantage Pak V-75 system installed in 2001. That prompted a call to Peter de Hertogh, Holland’s national sales manager, who came to the facility and found that the machine could not be set up wide enough (6x2) or narrow enough (2x6) to run the required format. Based on Myers’ prior experiences with Holland in general and with de Hertogh in particular, Merrick fast-tracked the installation of a new Holland Engineering CM-70T tray packer.

The New Twist-equipped multipacker permits an array of containers and pack patterns in industries such as beverage, canning, health/personal care and industrial products. It also accepts non-traditional shapes at higher speeds such as rectangular, oval, tapered and other container styles.

Merrick’s tray packer is situated about halfway down the first leg of the U-shaped production layout, which starts with unlabeled cans being unloaded from batch retort trays.

That short infeed conveyor takes the cans to a labeler that is a workhorse at this Texas facility. From there, the labeled cans continue for about 20 feet before rounding a 90-deg turn to head straight toward the multipacker on a mass-flow conveyor. At the infeed to the multipacker, the cans are mechanically split into two rows, one on each side of the single-screw New Twist metering assembly.  The New Twist metering system comprises a worm-style feed screw of the type seen in many packaging operations. But in this instance, it’s a smart system that starts and stops to meter the right amount of cans at the right time. With each rotation, it picks up a can in a thread; and once it has six cans on each side it releases that 2x6 grouping to be transferred atop a corrugated tray blank.

The New Twist itself is operated by servos from B&R Automation, which Holland chose “because of its absolute encoder technology,” explains de Hertogh, who is also the inventor of the technology. “Many servos lose their positional memory in an e-stop condition and have to ‘re-home,’ which was not acceptable for our design. The B&R servos always know where the screw position is and instantly resumes the synchronized operation of the screw right where it stopped.”

Integrated into the tray packer’s Rockwell Automation Allen-Bradley Compact Logix controller through an Ethernet IP connection, the B&R system controls things like acceleration, deceler ation and the number of times the screw turns.

Myers is impressed by the simplicity and effectiveness of the New Twist method. “I’ve worked on fillers and have seen other pieces of equipment that use worm screws as feeders,” he says. “Yet I never thought of using one in this way until I saw Holland’s video on YouTube. I was thrilled about it, and wished I’d had the idea to use a timing screw to meter containers like that.”

Still, there was some uncertainty mixed in with Myers’ enthusiasm. “I had confidence in the theory of this technique working, but you can make a video, put it on the internet and get somebody to bite,” he discloses. “That’s not the reason I purchased it. I purchased it because Peter has always been a good guy to work with and he’s been nothing but a good partner in this whole project. It wasn’t easy to make it all happen on Peter’s part or our part. As with all projects, we were pressed for time with a launch date and had on-going side projects as well. I admit that even I didn’t expect it to come out this nice and this good. The New Twist is interesting technology and it’s pretty slick.”

The installation went smoothly as well when it was switched out for the old packer.

“Once we had the old machine unplugged and pushed off to the side, we put wheels on this one and moved it right in,” states Myers.

Since the start-up of the New Twist system, the cannery’s production capabilities have taken a sharp turn for the better, not only to meter cans effectively into the required 2x6 tray format, but also do so 25% faster.

Although the system is capable of numerous pack patterns, Merrick runs the 2x6 multipack format exclusively to meet demand across three size formats. The day of our visit the plant was packing 13.2oz cans of Classic Working Dog Stew.

Merrick purchased an option to have a direct internet connection to B&R Automation support specialists using an optional “eWON” remote access for the A-B PLC.  It allows Holland’s technicians to go online and see the machine operating in real time and diagnose and correct issues remotely. As this editor found out, getting to and finding the plant located south of Hereford is no easy task. Holland claims that eWON is a resource that usually saves the customer the expense and lost time of traveling and is available at a list price of $2,000.

The change to the new Holland packer is like night and day. “This technology is all hand-screws and countersink buttons,” explains Myers. “I watched the operator make a change yesterday and she just removed one New Twist screw assembly and put on another size. We’ve got a timing mark on it so that it feeds the right amount of cans.”

The changeover of the New Twist metering assembly is about two minutes, Myers notes.

On the tray blank section of the tray packer, an operator cranks hand knobs to the length and width needed. “It has a little counter gauge on there so for a 3-oz size can tray, you run it up to that size tray marked on the counter, and that’ll be the exact size that you need,” says Myers.

According to Holland, machine changeovers are an eight-step process. All items requiring adjustment are either calibrated, color coded or have fixed stops. With the exception of one wrench to change the vacuum chamber, changeovers are tool-free. Holland’s newer models are completely tool-loss.

The changeover for one operator is now no more than 15 minutes. “We went from 40 to 15 minutes,” observes Myers. “That’s pretty good.”

While Merrick aims to run one format daily, they have made as many three changeovers during a shift that cumulatively saved 75 minutes’ time vs. the previous setup.

As with most production line upgrades anywhere, the bottleneck shifts to another machine. Myers has his sights set on alleviating one upstream of the multipacker along with several other line improvement projects—but that’s a piece down an ever-winding road.