When it comes to using trays, medical device manufacturers are accustomed to needing a heat-seal-coated lidstock, explains Brian Rosenburg, VP of sales for Technipaq. A new coextrusion for thermoforming medical packaging, however, may offer an alternative approach. TEQ (Thermoform Engineered Quality) is now thermoforming a coextruded polymer called TEQconnex that can be heat sealed to uncoated Tyvek lidding. TEQconnex consists of HDPE coextruded with a thin layer of a proprietary polyethylene that can seal directly to the uncoated Tyvek, rather than requiring a traditional adhesive coating on the lidding, Todd McDonald, director of sales and marketing for TEQ, told PMP News at Pack Expo Las Vegas.

McDonald reports that the thermoforming process is very similar to traditional HDPE thermoforming. “We do need to design the tray in such a way that the thin seal layer of the TEQconnex is opposite the tool side,” he says. TEQconnex builds upon the 100% recyclable solution TEQethylene launched by TEQ in 2012, and TEQethylene customers can leverage existing tooling to transition to a TEQconnex, he adds. 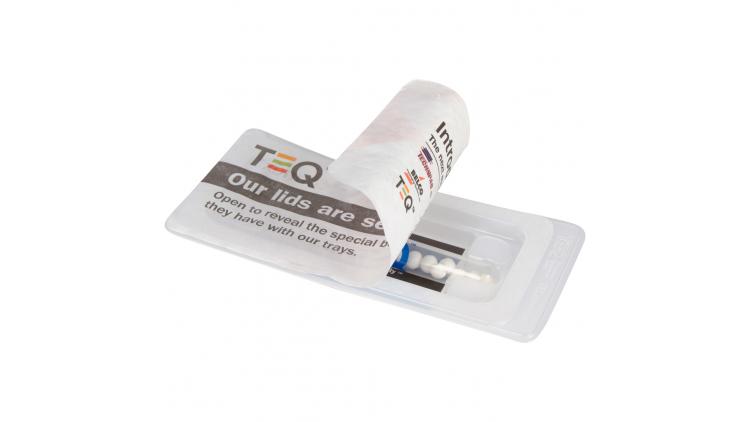 TEQconnex offers a number of benefits, most notably total package cost savings, continues McDonald. “Our research is showing that the added cost of applying the adhesive coating to the Tyvek lid is more than the addition of the seal layer to the TEQethylene (HDPE) extruded sheet. Our TEQconnex material is a coextrusion done all in one process, when the current model for adding adhesive is that it is a secondary process that also includes a freight component.”

Rosenburg, too, sees “an opportunity for a nice cost savings, without sacrificing functionality.” His team at Technipaq tested the seals between TEQconnex trays and three different grades of medical-grade Tyvek (Tyvek 1073B, 1059B, and 2FS), and all demonstrated “an equal if not greater average seal strength compared with that of conventionally coated Tyvek during tensile testing and burst testing.”

The samples also showed “clean peelability,” says Rosenburg. In addition, the solution helps avoid adhesive flaking that can occur with coated lidstock, adds McDonald. “The adhesive that is applied to the Tyvek can sometimes flake off, be scratched off by abrasion or vibration, and if the device is in contact with underside of the lid during the heat seal process can adhere to the lid,” he says.

Rosenburg also notes good seal transfer: “Normally when you peel open a lid sealed to a tray, you visually inspect the seal flange for transfer. This solution provides the same visual indication and shows the remnants of where the seal was.”

Tom Misik, VP of sales for Belco Packaging, concurs. “It is a different peel aesthetic, but you do see the seal transfer. It should help MDMs comply with ASTM F1886 'Standard Test Method for Determining Integrity of Seals for Flexible Packaging by Visual Inspection.' ”

And using an uncoated lidstock shouldn’t impact other physical strength characteristics, Rosenburg adds. “The strength comes from the substrate, not the coating,” he says.

The uncoated Tyvek can also be printed on both sides, which could also help increase labeling space. Using uncoated lidding along with TEQconnex offers better printability and ink adhesion when compared with a coated lid stock when printing on the interior of the package, says Rosenburg. When asked whether there was any concerns about printing on the inside of a package, which could come into contact with the medical device, Rosenburg says that MDMs should use an ink vendor that offers inks for medical use. “We’ve been printing on the inside of chevron pouches for years,” says Rosenburg. He doesn’t advise printing in the areas to be heat sealed, because sealing could distort the printing.

TEQconnex has been through EtO and gamma sterilization testing as well as biocompatibility testing according to ISO 11607-1:2006(R) 2010 by Spartan Design Group. “Shorter EtO sterilization cycles for the complete system” are possible, TEQ reports.

McDonald doesn’t anticipate any significant changes to the sealing process windows for temperature, dwell time, or pressure. “We have found the sealing parameters to be very similar, but recommend that each application is optimized to produce the best seal,” he says. “The use of Belco Packaging heat-seal equipment and lidding from Technipaq help us to ensure success for our customers.”

Misik says that TEQconnex runs “similarly to a normal zone-coated lid. We ran our samples at slightly higher temperatures, just around 15 to 20 degrees higher,” he says.

Technipaq will be exhibiting at Booth #2156 and Belco Packaging will be at Booth #2339 at the upcoming MD&M West show in Anaheim February 9-11. Click here for more details on the show, which will showcase products, supplies, materials, technologies, ideas, and suppliers required at every stage of the medical device product development lifecycle.