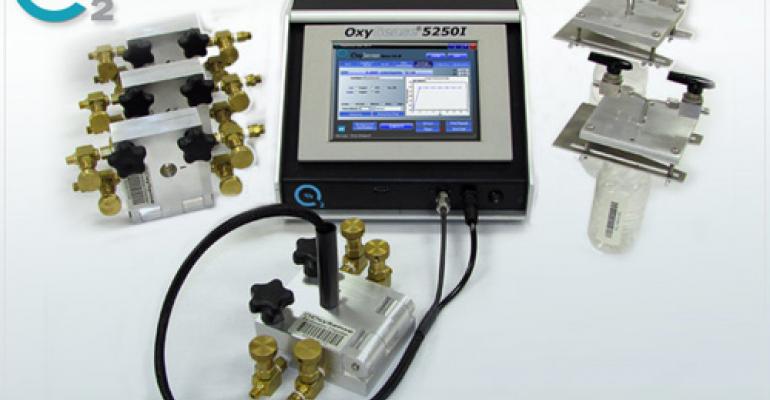 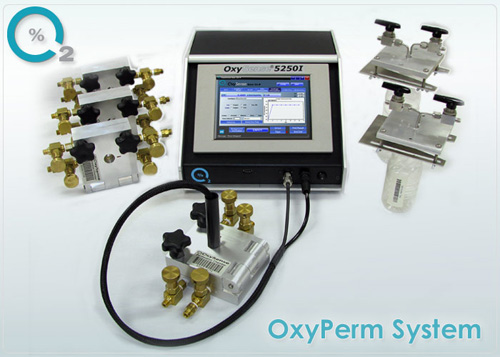 The OxyPerm Permeation/OTR System traditionally included the ability to test flat films using its economical yet accurate and reliable OxySense 5250i oxygen analyzer and low cost, easily scalable, patented permeation chambers. With the recent introduction of its BottlePerm Fixture, the same capabilities offered for flat films are now available for bottles and cups as well.

With the expansion of the OxyPerm Permeation/OTR System, you can set up bottle or cup permeation/oxygen transmission rates tests quickly and easily. Simply attach the "one size fits all" BottlePerm Fixture to your test bottle or cup, flush it one time with nitrogen or a similar gas using the built-in valve system, then using the OxySense 5250i oxygen analyzer, begin your test - it's just that simple. It's the all-in-one permeation/oxygen transmission rate testing solution.

In addition to flat film, bottle, and cup permeation/OTR testing, the 5250i oxygen analyzer can simultaneously be used for headspace and dissolved oxygen analysis, shelf life studies, closure testing, oxygen scavenger evaluation and characterization, line start-up confirmation, leak detection and anaerobic environment monitoring. It is the only system on the market that enables you to perform permeation/OTR tests on flat films, bottles, cups, as well as oxygen analysis on finished packages, and "live" packages (packages filled with "real" product in a real environment), all with a single instrument.

Knowing how your container or material performs in the real world as well as in the lab is one of the keys to developing successful packaging, and OxySense systems are the best tool for this job.

Accurate, fully scalable, easy to use, and very affordable. Everything you could want to make you more effective and efficient.