Non-destructive thermal imaging has transformed induction-seal analysis over the last year, and now the technology may be an option for heat-seal analysis, too.

The Induction Integrity Verification System (I2VS) from DIR Technologies (which stands for Dynamic Infra-Red Technologies) uses non-contact infrared imaging to inspect foil seals through bottle caps. The system compares the thermal images to an ideal thermal map of an appropriately induction-sealed container and alerts users to any nonconforming seals. In 2015, DIR Technologies announced a five-year agreement granting Pfizer Inc. access to the inspection technology, which can be used for 100% in-line inspection as well as QA/QC sampling. The I2VS also won the 2015 ACHEMA Innovation Award for Groundbreaking Process Analytical Technology Solutions for Pharmaceutical Packaging Applications at this year’s ACHEMA World Forum in Frankfurt, Germany.

For inspecting heat seals, DIR Technologies has introduced the DIR Eye for monitoring and inspecting the heat-sealing process on form-fill-seal machines, including those commonly used for medical device packaging. “The set-up differs due to differences in needs and materials used in the food/beverage/consumer products heat-sealing scenarios, but the technology and its effectiveness is unchanged regardless the sector,” Eran Sinbar DIR Technologies co-founder and CTO, tells PMP News. At Pack Expo Las Vegas, the DIR Eye heat-seal inspection system was demonstrated by founders Eran Sinbar and Yoav Weinstein, integrated into the SealPro Total packaging machine from Shemesh for wet wipes.

According to Sinbar, the technology can be used to detect and analyze the heat signature generated from the sealing of Tyvek/poly seals of form-fill-seal packages. “The DIR Eye monitors the uniformity of the heat seal—in each individual package and in contrast to other packages in the same batch,” he says. “The width of the sealing area is monitored. Inspection checks that the seal is correctly aligned, continuous, and uninterrupted. The DIR Eye can ‘see’ whether the product or any debris (for example, errant pieces of the Tyvek) has entered the sealing area. Anything that is incorrect in the process will be highly correlated with faulty seals.” 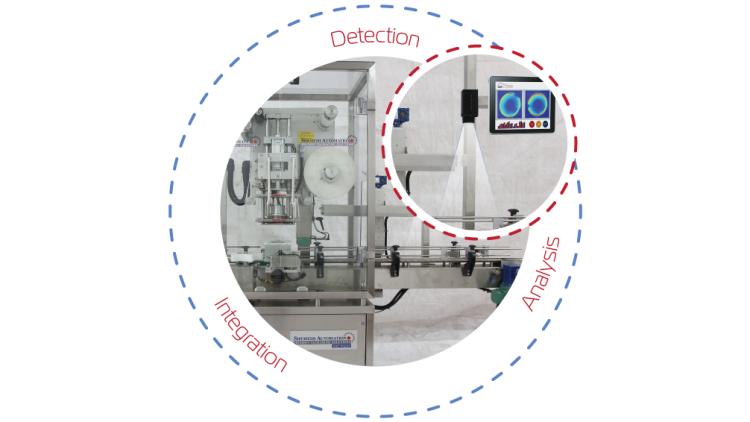 Describing the system as a “true process analytical technology,” Sinbar says it isn’t looking for traditional defects. “DIR isn’t searching for the pinhole or channel,” he explains. “DIR’s technology examines this issue in a completely different way. We look at the pattern of the seal in order to understand and monitor the quality of the process. Deviations from the pre-defined process window will have high correlation with improperly sealed packages. Deviations from the pre-defined ‘golden standard’ of the correctly sealed package will be highly correlated with faulty seals.”

Developed to operate on the user’s packaging line, analysis can match typical line speeds. “DIR solutions are all geared to inspect at the speed of the packaging line for which they are designed,” he says. “In the case of monitoring Tyvek/poly seals on form-fill-seal packages, speed is not an issue. The way the sealing itself is done brings the line to a practical standstill for each heat seal. This creates a time window in which it is simple to inspect the package that has just been sealed.

“The number of packages that can be inspected at once is a function of the desired level of sensitivity,” Sinbar continues. “When limitations are reached, an additional camera can be added to the inspection unit allowing for more data to be collected simultaneously.”

Users themselves decide how to handle out-of-spec seals. “DIR inspection is based on comparison to customer pre-defined ‘correct’ product. Before a batch is run, a brief system calibration ensures the basis of comparison is properly defined, enabling deviations to be identified,” Sinbar explains. “The customer decides what action to take as a result of rejection/marking of incorrectly sealed packages etc.”

Inspection of medical device packages is the newest area for DIR says Sinbar, but the company doesn’t anticipate stopping there.  “DIR has opened up a completely new frontier with our thermal imaging inspection solutions,” explains Sinbar. “We have already created game-changing solutions, but we are just beginning to scrape the surface. Process control for sterile medical device packaging is particularly exciting for the CTO office because where improperly sealed packaging in other sectors causes all kinds of problems, in sterile device packaging, if the seal is faulty, it can kill. The more we do, the more refined our solutions will become and the potential applications are practically unlimited.”

For more packaging and inspection ideas, visit WestPack (Feb. 9-11; Anaheim, CA), where you can explore options and services and identify new, more cost-effective products and processes to help accelerate your packaging projects.