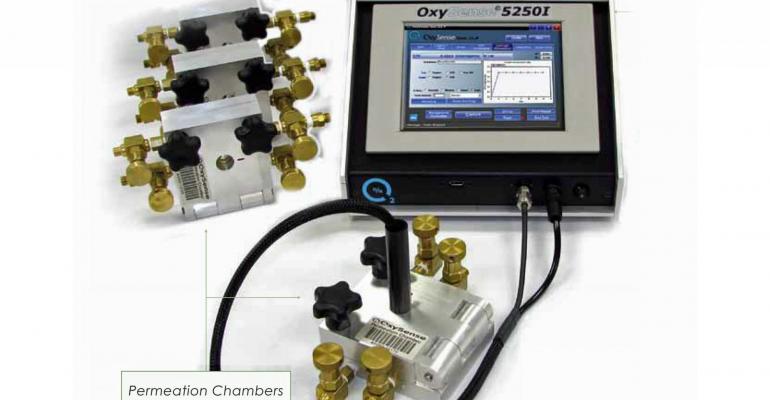 OxySense was instrumental in the approval of a new ASTM standard for gas permeation testing for flat packaging films based on a patent granted to the University of Florida.

It isn’t every day that a new ASTM Intl. standard for packaging gas permeation is released. In fact, it’s been seven years. And it’s perhaps almost as rare that the standard’s methodology was based on a patent developed in a packaging school, in this instance the University of Florida. The release of the new ASTM standard F3136-15 validates the University of Florida’s patented Dynamic Accumulation Film Permeation Chamber technology that OxySense Inc. commercialized and has been providing to packaging labs and film manufacturers globally since 2008. The measurement of gas permeation, that is oxygen transmission rate (OTR) data, is crucial to determining the barrier of packaging materials.

“This is a pretty big deal in gas permeation testing,” asserts Professor Bruce Welt, PhD, coordinator of UF’s Packaging Engineering Program. “This new test provides a substantially less expensive alternative to oxygen transmission rate testing than has been available before.”

Welt co-developed the method with Ayman Abdellatief while working in the Department of Agricultural and Biological Engineering using funding provided by the Florida Agricultural Experiment Station and OxySense. UF’s patent was filed in December 2007 and issued in October 2013.

The patent was commercialized in 2008 in the form of an accessory device that can be used with OxySense’s multi-purpose Model 5250i oxygen analyzers, and its predecessor Model 4000B, products that have been in the market for about 15 years, according to Ken Culver, president/CEO of OxySense. The 5250i analyzer is the third generation of an analyzing system that has been available since 2009. It is one of the company’s four products that essentially perform the same operations, but with slightly different capabilities.

OxySense, the exclusive licensee of UF’s patent, has been selling the add-on optional permeation device based on the UF patent since 2008, after connecting with Welt at Pack Expo 2008 in Chicago.“Dr. Welt saw that we provided analyzers for O2 permeation,” says Culver. “It was coincidental that he ran across us at the show. Dr. Welt had applied for a patent by then and we subsequently worked together to commercialize it.”

A number of analytical instruments in the market perform permeation analysis, Culver points out.  However, the 5250i is the only instrument on the planet that offers an optional permeation chamber based on the UF’s patented test methodology that is optimized for a specific, high-demand type of packaging material: film. 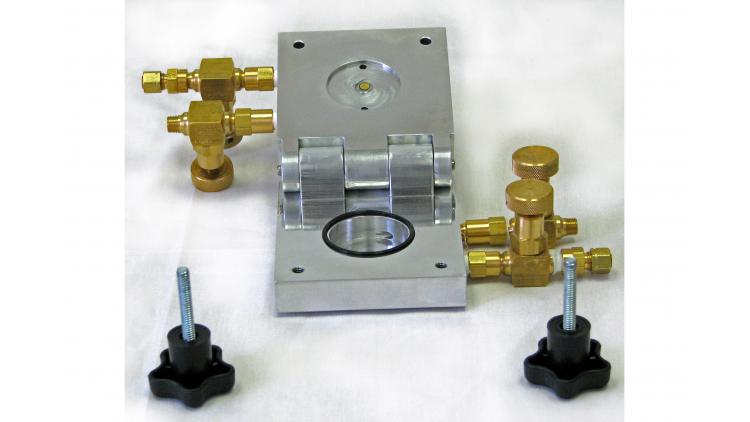 The hinged clamshell of the optional dynamic accumulation device opens to reveal the two chambers. The film is mounted on the flat surface of the lid and when the hinge is closed, the film separates upper and lower chambers for OTR analysis.

“Flat-film OTR testing is an important element for film manufacturers, film converters and anybody working in flexible packaging because they need to know what barriers they have to prevent oxygen from ingressing into their product which reduces their shelf life,” explains Culver. “An understanding of a film’s OTR has been an important piece of information for a long time.

“This device introduces a cheaper way to perform OTR for films and ample research shows that our method provides statistically identical results as competitive systems. It allows a number of other companies to obtain this information on a much more economical scale.”

The OxySense permeation chamber is a hinged metal clamshell that measures about 5 inches square and 2 inches tall with two separate chambers. The film or other material to be tested—“Really any flat material in a flat 2x2 inch square format can be analyzed,” says Culver—is placed across between the two sections of the chamber. Once closed, nitrogen is used to flush the “dynamic accumulation” chamber while the other is filled with oxygen. An optical fiber shines light through a window onto a fluorescing sensor to non-destructively measure the rate at which oxygen accumulates.

The sensor measures the amount of oxygen that permeates through the film over time. The analyzer readout is the OTR in milliliters of gas per square meter per day.

“A key element of UF’s patent is that the oxygen sensor doesn’t consume oxygen during the measurement, which was the key problem with this approach in the past,” Culver points out.

That’s comparable to competitive systems that are priced at $30,000 and upwards, according to Culver. He acknowledges that pricier systems may offer other capabilities like humidity and temperature control.

“These are two very different kinds of instruments, but they both can get you to the same destination,” he adds.

Notably, the OxySense system is scalable; up to 20 or more tests can be conducted simultaneously using a single OxySense 5250i analyzer and multiple permeation chambers.

The speed of the analysis depends on the permeability of the film being measured. “A low-barrier film will have a high OTR rate and the analysis can be done quickly,” Culver says. “A high-barrier film takes considerable time to evaluate.”

OxySense began working with the ASTM committee about two years ago to develop the standard.

Culver estimates that OxySense has sold more than 100 of the systems worldwide including “foreign locations that rely on ASTM methods,” he explains. “Now that this method has an ASTM standard associated with it, it’s our belief that this going to expand the market. Researchers like the simplicity and a lower cost for this type of technology—it’s a more efficient and economical way to get a substantial amount of information relative to permeation rates.”

Characteristic of scientific and packaging endeavors, the search to make something good even better continues: OxySense has been working with Welt and UF on a high-speed version for which another patent has been filed.