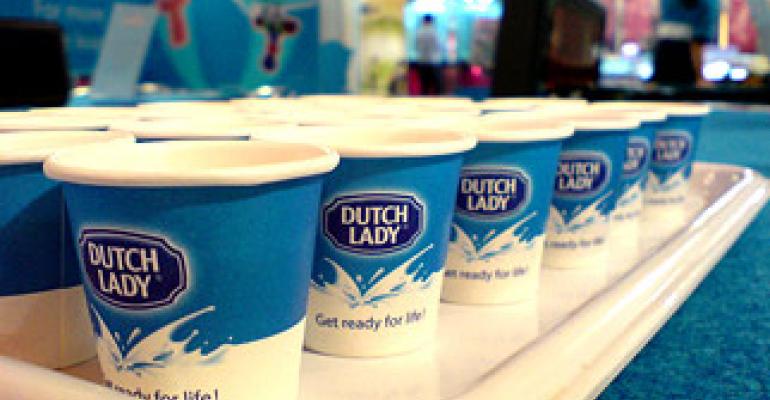 The public was encouraged to participate in the program by visiting the campaign's website at www.milklovesu.com and clicking on a tab to pledge for one pack of milk for one underprivileged child.

The FAC program was developed in 2006 as part of Tetra Pak's corporate social responsibility (CSR) program and is the company's primary channel for raising funds to help underprivileged children. The company considers its CSR program to be in direct concert with its “Protect What's Good” trademark and says it wants to be a change factor in today's scenario, where many children are deprived of food, education and shelter.

The director general of the Women's Development Department of the Ministry of Women, Family and Community Development Datuk Dr.Nurul Ainul Mohd Nor and Her Royal Highness Tengku Puan Pahang, Tunku Hajjah Azizah Aminah Maimunah Iskandariah Binti Al Mutawakkil 'Allalah Sultan launched the campaign on June 16, with events that included a mini carnival with various games and contests. The campaign concluded on July 31, with an assortment of flavored and unflavored milks distributed in Tetra Brik® packaging.

When asked about how Malaysia's status as a third-world country affected manufacturing and packaging practices, Jan-Erik Johansson, technical director for Tetra Pak Malaysia, Singapore and the Philippines, defended the Malaysian food industry. “I'm a Swedish national, and I must say that the food industries in Sweden, or the U.S., or Brazil or Malaysia all have high quality standards,” he says.

Discussing the stringent quality standards belonging to all the brand partners that partnered with Tetra Pak on the Milk Loves You campaign, Johansson adds: “All our dairy customers' production and plants already are practicing a high standard of quality maintenance and management systems, for example GMP (Good Manufacturing Practice) and HACCP (Hazard Analysis and Critical Control Points). Like us, where our carton packages protects the contents inside, there's nothing more sacred than product safety for our customers.”

He emphasized Tetra Pak's familiarity with the Malaysian food industry, noting that the company celebrated 40 years in the country just last year. The relationship with the Malaysian market goes beyond milk and actually began with the soy product manufacturer Yeo Hiap Sing. According to Johansson, the shelf-stable Tetra Pak carton is a good fit for the market because it allows products to be distributed without refrigeration in a tropical climate.

There is another reason why the donated milk was safely processed, packaged and distributed: All four dairies used aseptic filling to package the donated milk into the 125-, 200- and 250- mL Tetra Brik cartons.

Tetra Brik aseptic packages are comprised of paper, film and foil. The two innermost layers are polyethylene, which render the packages liquid-tight. The foil is aluminium, which provides the package with two of its differentiating benefits: Unlike a clear bottle, the Tetra Brik blocks out not only oxygen but also light. These layers are covered with printed paperboard, which gives the packages their rigidity. If the package will be used with a straw, a drinking hole is cut out of the paper only. The inner foil and polyethylene layers prevent the liquid from escaping the package. The paperboard box receives a final outer layer of polyethylene sealant, which provides a glossy varnished appearance and also helps protects the printed product from damage.

The packages used by the dairies came from Tetra Pak's packaging materials plant in Singapore. “The printing technology of the design feature on Tetra Pak carton packages is quite enormous,” says Johansson. “We have a flexo printing process, and, in some cases, we even do offset printing.”

Last year, Prime Minister Lee Hsien Loong presented the 2007 MAXA to Tetra Pak for overall excellence in innovation at the company's Jurong Pte Ltd facility to Singapore. The MAXA awards are organized by Singapore's Economic Development Board with partners McKinsey & Co. and the Singapore-MIT Alliance, comprising the Massachusetts Institute of Technology, the National University of Singapore and the Nanyang Technological University.

PD received samples of the packaging used in the Milk Loves You campaign. The packaging decoration successfully demonstrates the plant's ability to implement a number of high-end graphic arts techniques, including even laydown of large areas of solid color nestled next to gradients and other screens, and photographic imaging.

The solid colors are visual cues for the children that the milk inside is flavored. “The kids favor the flavored milk,” Johansson remarks. “They love the chocolate milk and the strawberry milk. That is quite common here.”

Much of the cartons' imagery also is designed to attract kids. Decoration includes illustrations of round, happy cows winking and renditions of the globally popular Powerpuff Girl cartoon characters, a limited-edition design for one of the milk brands.

Milk is a difficult-to-obtain, agricultural commodity for Malaysians. “So, the milk comes from places like New Zealand, Scandinavia, Australia, etc., where they produce a lot of milk products” says Johansson.

The dairies made the liquid milk from powder mixed with water in recombinationers. The recombined milk then is standardized to fix its fat-content level to full cream, half cream, low-fat or skim.

Most U.S. readers are familiar with the process of pasteurization of milk to be distributed in chillers. The milk donated by the dairies was distributed in a wide geographical area in Malaysia's tropical climate without the benefit of refrigeration. To ensure that the milk would be safely distributed without chilling, all four dairies use Tetra Pak's ultra-high temperature (UHT) processing to destroy spores or other organisms that might be left in the milk after pasteurization.

The UHT process raises the fluid temperature to 140 deg C for up to four seconds. According to Tetra Pak, the combination of the high temperature with a short processing time does not sacrifice the nutritional value of the milk. After the UHT processing, the milk then is chilled down to 20 deg C. To increase productivity, some dairies that use UHT processing also store the processed milk in aseptic tanks that range in capacities from 5,000 to 30,000 l. These tanks are designed to prevent the introduction of new bacteria or other harmful organisms after processing.

Aseptic conditions are important to the packaging of ambiently distributed milk. Because of this, Tetra Pak's UHT systems have a clean-in-place system for each major processing and packaging station. “For example, at the mixing station you have a special circuit that takes care of pasteurization machinery and also the rich tanks,” says Johansson.

The cartons enter the machine as a single roll that is the width of one flat package. The web packaging material goes through sanitization process where the food contact side is cleansed with hydrogen peroxide. The packaging is formed into a tube that is filled with milk. The form/fill/seal machine then