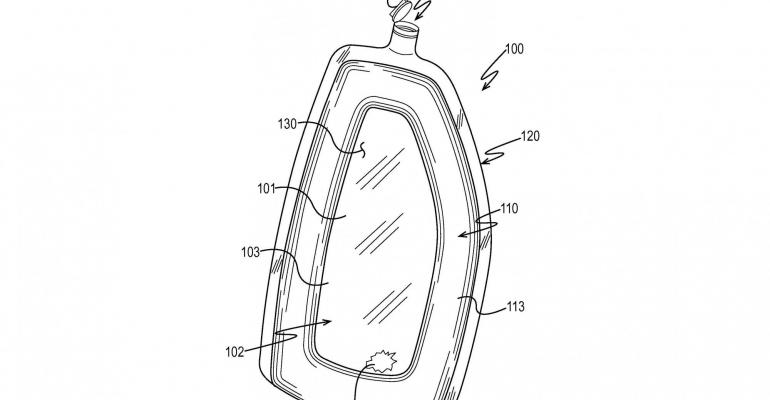 This pouch invention from a major brand owner that uses filled chambers for structural strength was voted #1.

Inventions by PepsiCo, P&G and Abbott captured your attention, as well as new flexible packaging and an ingenious why-didn’t-we-think-of-that-before metering device.

You have voted! Here are the Promising Patents you, our readers, have found most interesting in 2014. The tally is based upon page views per PackagingDigest.com online analytics through the first eight months of the year as of Sept. 1.

This six-pack is an evenly balanced mix of different types of packaging and applications. It appears that brand recognition is important, so filings by companies like PepsiCo, Procter & Gamble and Abbott Labs made the cut. Also, three packaging vendors are included, two of which are materials suppliers while one machinery vendor, a late addition to the list, comes in at No.5.

Here’s another chance to see which of the patent filings among more than 25 we’ve reported on these past months have been the ones your peers have been most interested in this year. Links to the original articles are at the end of each item.

Without further ado, we present the 6 Most Popular Promising Patents of 2014 (so far) in reverse order:

6. Flexible container is reclosable and stackable

Flexible packaging remains a material of choice for many new and relaunched products so the appearance of a patent centering on this efficient and consumer-friendly format comes as no surprise. This filing is for a flexible, stackable container for transporting and storing just about any type of product, from foods to liquids to detergent and more. It creates a sealed bag or package formed from a flexible film and with a recloseable fitment or lid integrated into the design.

The lid fitment may be made from PE, PET, PLA or other thermoformable or injection-moldable material.

Besides offering consumer convenience, the lid also serves to structurally reinforce the package for stacking.

The sheet of film may be formed from PP, PE, foil, paper and/or of composites.

The filing also points out the cube efficiency of the rectangular shape in transport and distribution and at retail and describes the manufacture of the container using vertical or horizontal form-fill-seal equipment or other machines or machine assemblies. This patent is assigned to Clear Lam Packaging Inc. (www.clearlam.com).

A package machinery company breaks into the rankings at No.5. This may be the most unique entry in this list, including the fact this posting reached this lofty spot in only two weeks; if this were a Billboard Top 40 List, it would be marked with a bullet.

It’s also unique because we were able to pay an on-site visit to one of the first two users of the technology: Merrick Pet Care’s operations in Hereford, TX (see pdlinks.com/Merrick).

Every once in a while a packaging development comes that is as revolutionary as it is simple, a combination of elusive qualities that is a rare bird indeed. Such is New Twist, a patent-pending metering system that comprises a worm-style feed screw of the type seen in many packaging operations. But in this inventive use, the feed screw is a servo-driven smart system that starts and stops with precision to meter the right amount of cans at the right time. With each rotation, it picks up a can in a screw thread; and once it has reached the preset amount of cans on each side of the screw, it releases them as a group.

The New Twist patent filing published July 10 summarizes the invention as “Grouper apparatus for a packaging machine and methods of grouping items for packaging.” The system can handle a numerous range of product shapes and packing configurations.

The publication date was especially timely for me as an editor because I had already made a visit two months earlier to one of the first installations of the New Twist technology by patent-holder Holland Engineering LLC (www.hollandpkg.com) for its Model CM-70 tray packer. The detailed case study for Merrick Pet Care centers on the cannery’s use of the New Twist technology to produce a space-saving, retail-friendly 2x6 multipack.

At Merrick, the New Twist screw portion can be changed out for a different can size in two minutes and the entire multipacker in 15 minutes in what is essentially a tool-less process. Merrick’s previous multipacker took 40 minutes to changeover.

While multipackers including Merrick’s are the first applications of the New Twist technology, Peter de Hertogh, Holland Engineering’s national sales manager and New Twist inventor, tells PD that “we have plans to offer this technology for shrink wrappers in 2015.”

Our first brand owner filing in the rankings is this patent assigned to PepsiCo, Purchase, NY. It solves a production challenge to produce carbonated soft drinks (CSDs) and other beverages by inducing carbonation after filling. One obvious way to carbonate a liquid is to add solid carbon dioxide, but that presents problems—including but not limited to container deformation—that the patent addresses.

In one method, after adding solid carbon dioxide and sealing the container, the development of overpressure is limited through the use of an adsorber material—such as activated carbon—that is included in the applied closure.

Alternately, in-line agitation done at 150 to 200 oscillations per minute for at least 2-1/2 minutes can be used to control the overpressure from the added CO2. The filing indicates that standard production equipment such as vibratory conveyors can be used to provide the needed agitation.

Assigned to Abbott Laboratories, Abbott Park, IL, this recently published patent plays off yet another revision for the ever-popular pouch that is flexible in far more ways than in structure. It was only nosed out from the No.2 slot by a half-dozen page views.

Abbott’s patent filing for the pouch addresses a need for liquid human milk fortifiers that are commercially sterile, do not require refrigeration and have relatively low acidity. In addition, it should be sufficiently flexible to allow in-pouch mixing and transparent so that a user can see that the proper mixing has occurred before opening the packaging to dispense the fortifier.

The patent invention comprises two films that create a front panel and a back panel to define a space within the structure that contains a volume of liquid product that’s less than about half of the total liquid capacity of the pouch, which can range from 2mL to 80 mL.

What's going on with that unused nearly 40% or more of the pouch volume is that it permits product mixing via manual kneading by the user.

In fact, the need for kneading is a fundamental differentiating characteristic of the pouch and is illustrated through three charts. These indicate that when the amount of liquid in the pouch exceeded 50%, the kneadability of the pouch was reduced.

That design-driven kneading attribute results in a more effective, better blended product than a ready-to-use infant formula, which can experience phase separation including creaming at the top and sediment at the bottom.

One version of the pouch is spouted. The patent also describes a hinged, secondary container that serves as a multipack.

Winpak Films Inc. (www.winpak.com), Senoia, GA, was awarded a patent for a seven-layer film that provides excellent oxygen- and water-barrier properties for food packaging applications. The film is claimed as durable and with good optical properties. It is proposed as a replacement for oxygen-barrier films that rely on the use of ethylene vinyl alcohol copolymer (EVOH) or nylon MXD6, which lose their barrier properties when exposed to water.

At the core of the filing and the literal core of the 7-layer structure is a layered blend of polyamide and amorphous polyvinyl alcohol (PVOH). It is noted that a film made without PVOH in the critical fourth layer does not exhibit the required oxygen barrier properties to provide the proper shelf life. In total, five of the seven layers are proposed as polymer blends.

What is also notable about the patent filing compared to others we have assessed over the past 18 months is that it is as brief in length—only 5 pages long—as it is of illustrations, in this instance just two, which show cross-section, layer-by-layer structures.

Shown in the picture at the top of this article, this patent at the apex of our list hits on two key points of interest: a major brand owner and a flexible package. This patent filing from Procter & Gamble Co., Cincinnati, is for a new kind of flexpack, one that is claimed to be less expensive to make, can use less material and can be easier to decorate when compared with conventional rigid containers. So far, pretty familiar as far as flexible packaging goes, right?

However, designed for fluent—flowable—products, this pouch is, notably, configured with novel support structures that do not require the use of the thick solid walls used in conventional rigid containers. Furthermore, the patent’s reference of a "structural support volume" refers to a fillable space made from one or more flexible materials.

As a result of the ingenuity of this supportively structural design aspect, the patent is also remarkable in that these flexible containers can be more readily and carefully dispensed because the pouch sides can be more easily and controllably squeezed by human hands.

The concept accepts numerous types of closures, from a flip-top cap to a pump-spray dispenser. It can be made in reusable or disposable formats.

The filing is accompanied by approximately 50 figures representing various plays on the same, patented theme, and visually demonstrates the wide-ranging utility of the concept.