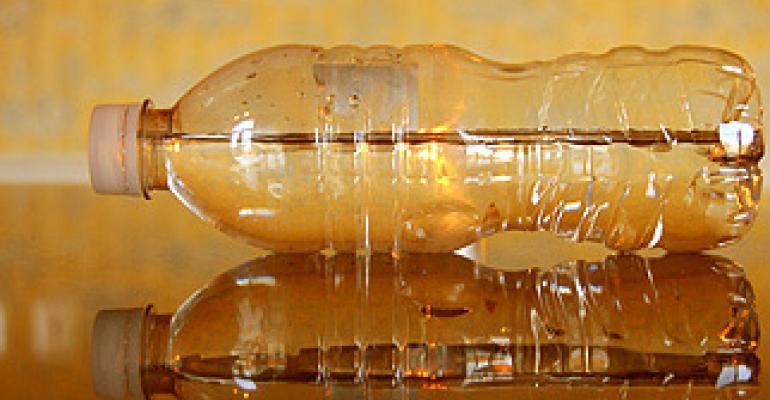 In terms of price it is very difficult for bottled water to compete with tap or municipal water and consequently many commentators felt that waters would be particularly exposed to the global recession. Canadean's recently published Global Bottled Water Report however suggests that final year figures for 2009 may see the worldwide market for bottled water increase by around 2%. Although this does represent a slowdown, it is encouraging for the industry that the category can maintain growth in even the most testing of trading environments.

The market would have fared significantly better if one discounts North America, which in 2008 dropped from double digit growth the year before into decline. In North America a combination of consumers switching to more economical filtered tap water and concerns over the environmental impact of bottled water have triggered the downturn in sales. In the US some government offices are banning packaged water from government offices and events while various other states are attempting to add bottled water taxes. North America accounts for 18% of global sales and the performance here is harming the overall global picture; in 2009, without North America the global water market was forecast to increase by a healthier 4%. 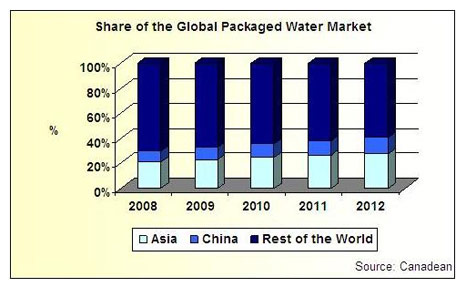 The biggest market for waters, West Europe, which accounts for nearly 30% of world volumes, is also set for negative 2009 results. Spain and France, two of the heavyweight markets, are responsible for much of these losses. In Spain it is the slump in on-premise sales which is responsible for the extent of the projected losses as the recession keeps consumers at home. In France three factors have been affecting still water consumption; environmental (packaging and transport), tap water campaigns and of course economic issues related to the price of mineral water.

Asia will once again be the main global driver in 2009 and within Asia it will be China that boosts the regional and indeed the global performance. Canadean's Quarterly Beverage Tracker suggests that the Chinese water category jumped by 18% in quarter 3 last year and is set for another big increase in volumes. The market has been aided by hot weather in certain important parts of China and intense price competition which has kept prices low. An improving economy is very significant and it is perhaps no surprise that the Chinese quarterly GDP growth rate was 8.9% year on year, which was 1.0% higher than Q2-09. There remains plenty of slack in the Asian market with per capita two and half times less than the global average.

With the help of Asia, the bottled water category seems to have ridden out the worst of the global recession, but Canadean consultants do not expect the pre-recession growth rates to return. Canadean expect the water market to settle back down to a growth rate of 5% after 2009, a marked slowdown on the 7% seen in 2007 or the 9.5% jump in 2006. What will be encouraging for the water industry is that Canadean anticipate every region in the world to be registering water growth in 2010.