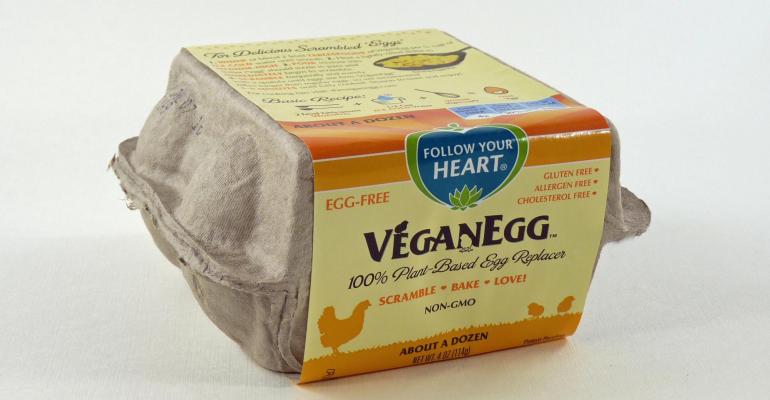 Packaging can influence a product’s shelf impact as well as the location of where the product is retailed. Thanks to adapting a familiar package, the unique VeganEgg stands out on-shelf whether in the shelf-stable bakery aisle or in a dairy cooler.

One such example comes courtesy of my former coworker and food techie friend Claudia O’Donnell, a principal of Global Food Forums. She keeps an eye out for interesting packaging while traveling, this latest of which she uncovered during a visit to Natural Products West Expo, held in Anaheim, CA, in March. Her find meets my criteria perfectly: VeganEgg is a 100% plant-based egg replacer that’s packed in a molded fiber egg carton, which is atypical of other egg replacers that are packaged in bags.

“There’s nothing else like it in the market,” says Sara Steinbeck, brand owner Earth Island’s central U.S. sales manager. She points out that VeganEgg is an egg replacer than can do everything a chicken egg can do—except that it’s powdered, vegan and shelf stable.  And unlike other egg replacers, which are primarily used for baking and where the product may be shelved, a VeganEgg can be scrambled. 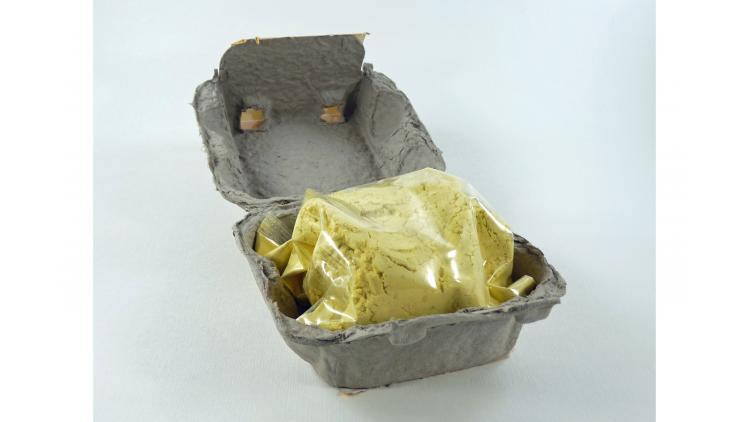 The product’s first packaging iteration was a bag, but the format lacked shelf impact and recognition by consumers. “We needed packaging that could better communicate the product’s proposition to consumers,” Steinbeck says, which led to the use of an actual egg carton. Because the carton is biodegradable, recyclable or compostable, it aligns with the company’s environmental stance, she adds.

It turns out that the products location with cartoned eggs is its “default positioning” by retailers, according to Steinbeck, which include Fruitful Yield. “Every retailer makes its own decision where a product is placed.”

But even that positioning has another drawback. “The dairy case isn’t where vegans look for products, which is the product’s main audience,” Steinbeck points out. “We don’t really compete against chicken eggs." 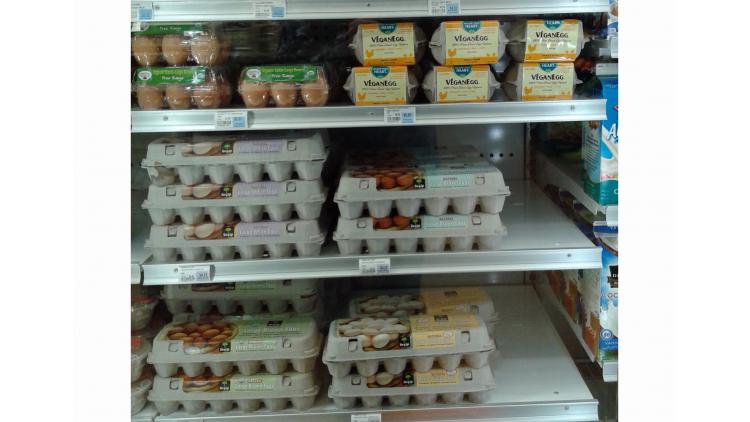 Steinbeck tries to lead retailers to position it in the cooler, ideally grouped with other refrigerated vegan products like alternate cheese.

The cartoned egg replacer stands out anywhere it’s positioned—even in the dairy case with cartoned eggs where the bright, full-perimeter-wrapped, pressure-sensitive label provides visual differentiation. The label is printed with a yellowish-egg-look color scheme complete with sunray illustrations to reinforce an eggs-for-breakfast vibe.

More about the product and packaging… 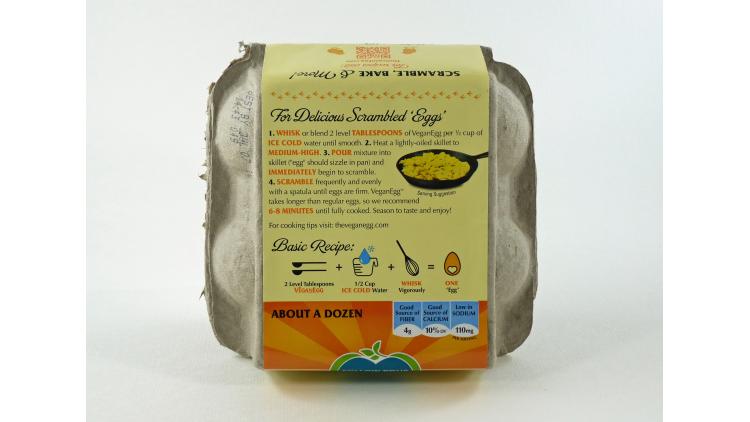 The carton is sized for four eggs, although that’s not what’s inside: It’s a plastic bag of powdered product.  The preparation instructions are illustrated on the top carton portion of the label.

The powder makes “about a dozen” egg-free egg equivalents, according to label copy. Two teaspoons rehydrated with ice cold water and whisked make for one “egg.”

Not only is the product egg-free, but it’s also gluten-, allergen- and cholesterol-free and NonGMO to boot.

The back-of-carton label portion sports a QR code as well as a lengthy paragraph in small type that answers the burning question, “What is Algal?” In short, it simply means an ingredient derived from algae. One interesting factoid is that the algal is produced from native microalgae originally found in the Netherlands. 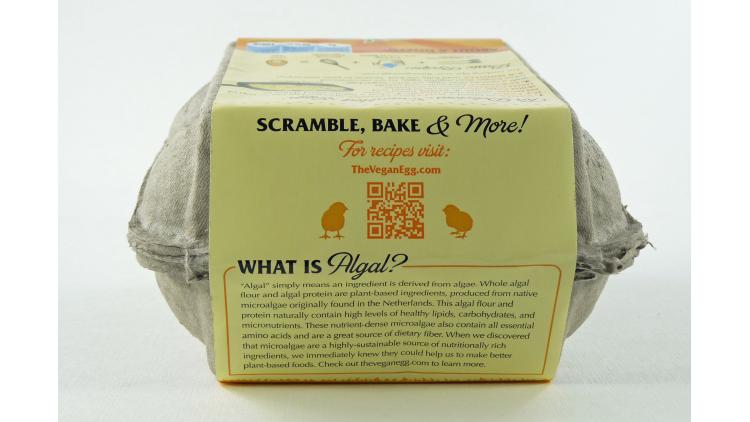 Looping back to where we started with this: My foodie friend Ms. O’Donnell came at the product from a totally different direction than I. “I was attracted to the product in the first place because it uses one of the emerging plant sources of protein–‘whole algal flour’ and whole algal protein,” she relates. “The formula is heavily dependent on a range of hydrocolloids to help add structure (thickening, gelling) using modified cellulose, cellulose, gellan gum and carrageenan. It's not a ‘clean label’-type product, but it takes care to make sure all the ingredients are vegan.”

I certainly could not have stated that any better.

From my view, the marketing/positioning/packaging all come together “eggs-actly” right. Yes, it does fit in seamlessly with other egg cartons, but there’s enough difference noted initially by the large front-facing VeganEgg logotype—that alone is distinctive from the decoration on the other packaged eggs—that states very succinctly what this product is about along with the supportive elements throughout the label.

Launched in January and available nationwide, VeganEgg is sold at Fruitful Yield, Wegman’s, Natural Grocers, some Whole Foods, Mother’s, Hyvee, Roundy’s, Mariano’s and others at a suggested pricing of $6.99 to $7.99.

And the product's reception? “We’ve had good hype and all-positive feedback since the launch including that the packaging stands out,” responds Steinbeck.

And you'd like to read a user review, this one's complete with pictures.