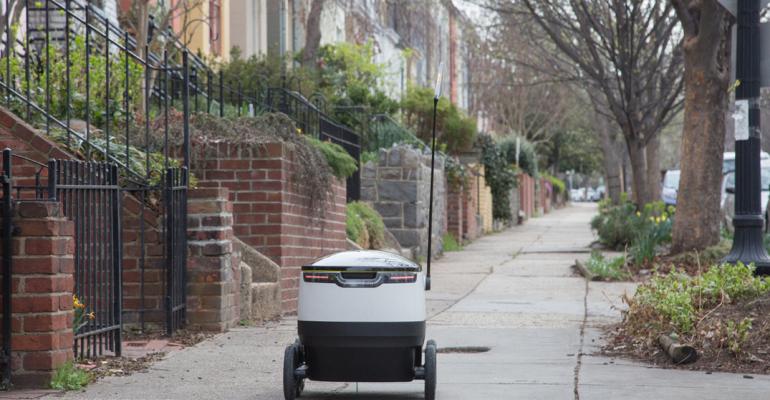 Starship Technologies’ earthbound drone is designed to roll on sidewalks, moving at the speed of a pedestrian. The company is testing the vehicle in the United States and Europe for delivery of food and other products.

Aerial drones are not the only thing going when it comes to autonomous delivery devices. Starship Technologies is creating a fleet of self-driving, earthbound robots that roll along on the sidewalk rather than fly through the sky.

The small, six-wheeled robots are designed for deliveries within a three- to five-kilometer radius (about two to three miles). Moving at four miles per hour, human walking speed, the robots can either drive themselves or be controlled remotely by humans.

The robots are designed to act like pedestrians, merging with human foot traffic. And they incorporate multiple detection systems, which gives them situational awareness of people, bicycles and cars.

This summer, Starship Technologies announced it would test the robots under real-world conditions in the United Kingdom, Germany, Switzerland and Washington, D.C. The tests include a food-delivery trial in London with Just Eat, a takeaway ordering service. The European tests started in July, and the D.C. trial could start as early as this September.

The company also has been working with researchers at the University of Arkansas to test the robots’ technology and reliability and to learn how people react to the robots when they encounter them en route. So far, the robots have traveled more than 1,000 kilometers (more than 600 miles) in Arkansas.

Henry Harris-Burland, marketing and communications manager with Starship Technologies in London, answered a few questions about the robots.

Do you have any results to report from Starship’s project with the University of Arkansas?

Harris-Burland: It’s been very successful. Social acceptance and public reaction have been extremely positive, which is great.

One of our findings is that a large majority of people, say 60%, 65%, actually ignore the robot, which is really strange, but they do. And 35% to 40% are overwhelmingly positive. Social acceptance and humanization of the robot were two very important points to learn about in the real-world environment, and the University of Arkansas has been doing that for us. There are kids trying to pet the robot like it’s an animal. It’s been crazy.

Are Starship’s robots fully autonomous? What level of human “piloting” is required to deliver packages with these vehicles?

Harris-Burland: There are three phases of our business development. In the first phase, which is what Arkansas is doing, the robots are 100% human operated; they are learning their environment. Phase 2 is a mixture of automation and human operation; this is where the robots start building a 3D map of the area, and they start driving autonomously.

What we’re aiming for is 99% autonomous driving, where one human can control 100 robots. We always want a human to be able to intercept at any time. So, for example, if a tree has fallen on the sidewalk, a human could take over and optimize the route or tell the robot to change its direction. We did a 90% run in Silicon Valley recently, which is a huge step.

Does Starship plan to deliver packages to consumers’ homes or to a central hub?

What would actually happen is the delivery drivers and vans would deliver as normal, but instead of delivering to people’s homes, they’d be delivering to a central Starship hub, and then the robots would take over and deliver to consumers’ homes.

Will products carried by the robots require special packaging?

Harris-Burland: In the short to medium term, our robots will not be changing the way products are packaged. We’re creating something that can integrate easily into the current transportation system, which is one of the benefits of the service. So there wouldn’t be a need for any packaging changes, which is why so many retailers have wanted to start using this service straightaway.

What products are best suited to Starship’s robotic package delivery? Is there a weight limit?

Harris-Burland: There are three markets we’re focused on. The first is parcel delivery. So that ultimately incorporates almost every single retailer online—anything that will fit in the robot, which is about 85% of things that you can order online. The second industry is groceries. And the third industry is food delivery, takeaway from restaurants. The robot can carry 10 kilograms [about 22 pounds].

How big are the robots?

What are the benefits of this method of package delivery?

Harris-Burland: The benefit to consumers is convenience. The convenience is just incomparable to what the market is offering at the moment. You can call the robot to your house within any five-minute window, any time of day or night.

The second thing is cost. What we’re aiming to do is bring the cost of delivery down to a dollar in the next couple of years, which is completely unprecedented.

For businesses, it comes down to cost, as well, and efficiencies. In the last mile, the vehicle and the labor are normally two of the biggest costs to the company.

Explore cutting-edge packaging, manufacturing and automation solutions from hundreds of exhibitors at MinnPack 2016 (Sept. 21-22; Minneapolis). Use discount code PDigest16 to get 20% off your conference registration.