Remove, Reduce, Recycle, Renew, Re-use. These are five of the original 7 R's of Sustainable Packaging revealed by Wal-Mart when it introduced its Packaging Scorecard to a standing-room only audience at Pack Expo 2006. The mega-retailer has since shortened the list to reduce, reuse and recycle, but also added a new term, rethink, to encourage companies to always remember to consider smarter sustainable options.

To better understand sustainable packaging, we need to understand what sustainability is and how it's different from the focus in the 1970s on the environmental aspects and impacts of packaging.

Sustainability surfaced in packaging vernacular in 2006, after publication of "The Triple Bottom Line: How Today's Best-Run Companies Are Achieving Economic, Social and Environmental Success - and How You Can Too" by Andrew Savitz with Karl Weber, which Amazon.com describes as "the groundbreaking book that charts the rise of sustainability within the business world and shows how and why financial success increasingly goes hand in hand with social and environmental achievement."

This broader look expands on packaging's previous environmental-only focus to include the business (economic) and social aspects (such as ethical material sourcing and manufacturing conditions).

The basis for sustainable packaging started during the environmental movement in the 1970s. Americans celebrated their first Earth Day in 1970, and became aware of some of our ecological problems such as pollution and littering through various media outlets. One of the most powerful messages came from The Crying Indian anti-litter commercial from Keep America Beautiful.

The finger-pointing at packaging as the main culprit of the country's ecological problems didn't happen in force until the late 1980s. That's when the Garbage Barge became a media sensation. Piled high with trash from Long Island residents, the Mobro 4000 barge left New York City on March 22, 1987, initially headed for a landfill in the southern U.S. But the load was refused there, and at other ports. As Chaz Miller wrote in 2007 for Waste 360, "The economy was hot, and news was slow. Garbage, which is just the effluence of our affluence, was the perfect target. Greenpeace, Phil Donahue and Johnny Carson all used the barge as fodder. Six months after it sailed, the garbage barge's trash was burned in a Brooklyn incinerator, and the ashes buried back in Long Island. The media didn't attend the funeral."

Thus began a concerted effort to reduce the volume of trash by increasing recycling rates of used packaging in the U.S. Efforts to establish an economically viable infrastructure for various packaging materials and engage all stakeholders continue to this day.

While sustainable packaging isn't a difficult concept to understand, it is complex. Is it replacing a rigid container with a pouch? Is it removing a carton and letting a toothpaste tube stand on its own on a shelf? Is it creating one bulk pack instead of multiple single-serve items? Is it using PET instead of PVC because PET can be easily recycled? Is it changing from a round to a square container to be more cube efficient? Is it faster set-up times on the packaging line to minimize the amount of product and packaging waste? Yes, it's all of this - and more.

Sustainable packaging is no longer focused on just recycling. Just as packaging is not the only eco target, although it is still top of mind for many. Right or wrong, packaging is frequently scrutinized and used as the measure of a company's overall sustainability, even though it may contribute only a small percentage to the total eco impact compared to other things, such as transportation, and water and energy use.

The idea of looking at the entire life cycle of a package - from raw materials all the way through disposal - gained ground in the early 2000s. But much of the focus remains on end-of-life.

In an exclusive interview with Packaging Digest in 2013, Jim Hanna, director, environmental impact, Starbucks Coffee Co., explains, "Consumers, especially in the U.S. and Canada, define sustainable packaging by focusing on end of life. That's caused us to focus a lot of effort and resources into creating solutions for our packaging because we know that's what resonates most with our customers."

For example, efforts to develop plant-based bioplastics for packaging accelerated in 2009 when the world's largest beverage company devoted time and resources to create and commercialize the PlantBottle. The Coca-Cola Co.'s first-generation PlantBottle replaced one of the two base components of polyethylene terephthalate (PET) with renewable materials made from sugar cane byproducts.

PET is made of 30% mono-ethylene glycol (MEG) and 70% purified terephthalic acid (PTA). The PlantBottle replaces petroleum-based MEG with a plant-based alternative, which doesn't change the recyclability of the PET.

To help fund continued commercialization of the PlantBottle technology and make it more economically viable for all, Coke has collaborated with a number of suppliers - as well as consumer packaged goods (CPG) partners, including Heinz and SeaWorld Parks & Entertainment.

While the Coca-Cola PlantBottle introduction was one of the most impactful developments for the bioplastics industry in recent years, it was not the only one. The Bioplastic Feedstock Alliance is another partnership developed to boost bioplastics development, an area of sustainable packaging that is undergoing a quiet revolution.

But bioplastics are only one alternate material being considered. Dell has been actively looking for and using sustainable alternatives for packaging materials, such as bamboo, wheat straw and mushroom-based packaging. In May 2014, the computer and accessories dynamo touted its new packaging made from air. 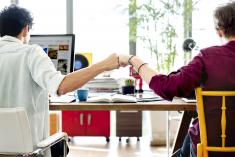 Newsletter Subscriptions
To help you succeed in your packaging career, sign up for our market-specific newsletters to keep up on current and emerging trends, hear expert advice, and learn about new technologies.

Sign up for the Packaging Digest News & Insights newsletter.

Plastics Industry Must Speak with United Voice to Counter Anti-Plastics Messaging
Jun 29, 2021
At Virtual Engineering Days, Plastics Industry Association President and CEO Tony Radoszewski urged industry to "push back" against those who want to “put us out of business.”

Polypropylene Liner Can Be Recycled with PP Closures
Jun 29, 2021
The foam liner can be recognized by automated near infrared (NIR) sorting systems at municipal recycling facilities (MRFs).

What’s On-Trend for Ecommerce Packaging Today?
Jun 24, 2021
Will computers replace packaging designers when it comes to creating effective packs for ecommerce shipping? We talk about that, and other vital ecomm stuff, in this fast-moving podcast.

First Recycled Lego Brick Prototype Built
Jun 23, 2021
Prototype made using PET plastic from discarded bottles is the first brick made from a recycled material to meet the company’s strict standards.

How to Get Plastic Packaging Back in a Circular Economy
Jun 23, 2021
Mechanical recycling can only take us so far, so we must look at advanced recycling methods to meet environmental objectives. However, the road is rocky.

Plastic Water Bottles Made with Advanced Recycling Sold at Target
Jun 21, 2021
The sustainable and reusable Eco Ello Bottle made from Eastman’s Tritan Renew is available at Target stores and online.