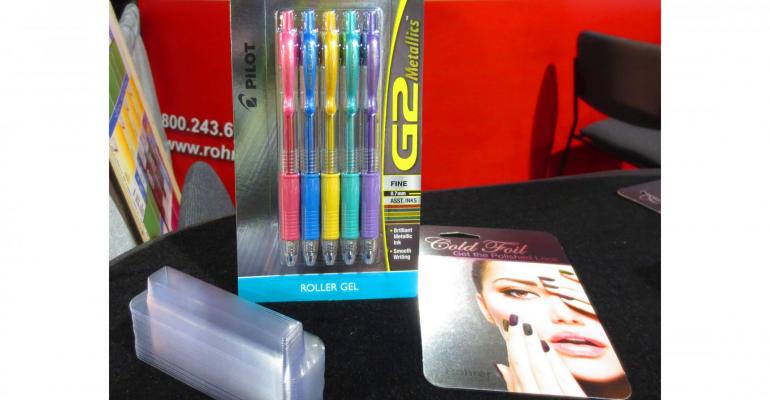 These were from two booths with two different packaging formats with a common theme of making brand owners’ packs pop at retail.

The first was Rohrer Corp., which promoted its Cold Foil Blister Card Combo Program technology, and had on display one of the first users of the packaging, Pilot Pen's G2 pens. It is used, appropriately, for the brand’s Metallic line of writing instruments in carded blister packaging.

The breakthrough with the technology is that the eye-catching, reflective foil silver color is applied inline on-press, “like a fifth color on the four-color press,” offers John Hagarty, Rohrer’s manufacturer rep, and is done at about half the cost of the more complicated and conventional hot-stamped foil method.  The blister flange can be heat-sealed directly to the printed foil; the blister card is 0.020 SBS paperboard.

In development for about a year, the packaging was introduced about six months ago, Hagarty says.

Rohrer offers cost-cutting ganging of production runs for customers, and in fact offers cost-effective orders of the Cold Foil Blister Cards in quantities starting at just more than 6,000. 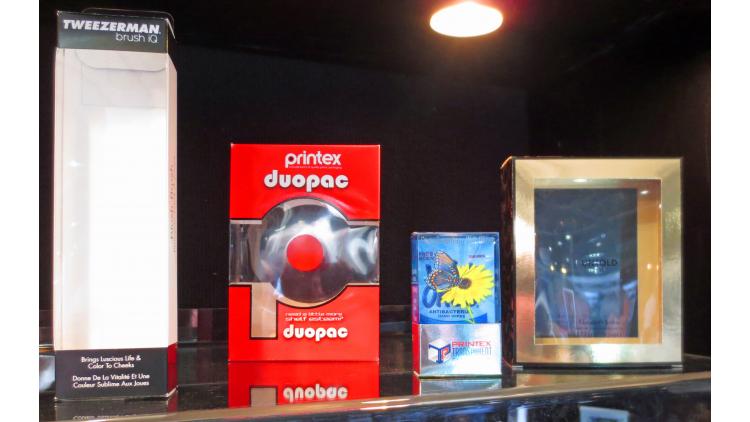 It’s a development that extends the ability to add clear plastic windows to paperboard cartons to the next level, says the company’s Dan Belliveau, who also notes the company is uniquely positioned with production machinery that can marry these materials together.

The plastic portion is APET or rPET combined with SBS or 100% recycled paperboard; they have also had one customer that has used polylactic acid (PLA) for the clear portion, Belliveau adds. The plastic can be printed in up to four colors.

The hybrid cartons are suitable for retail branded liquor, pharmaceuticals, cosmetics and many other product categories, he says.

The next iteration of the annual PackEx tradeshow will be in Montreal in late 2016.