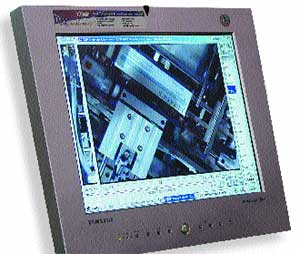 On first glance, and even upon closer inspection, one would never imagine there could be a problem with a brand-spanking new case packer just off the factory floor from Brenton Engineering. In fact, that's Brenton's objective, thanks to "a set of eyes that never blinks," as its maker likes to call it. Brenton, an Alexandria, MN, packaging machinery manufacturer specializing in case and tray packers, robotics, shrink wrappers, material handling equipment and more, develops machinery that runs at high speeds (up to 35 cases/min, 360 cartons/min on the infeed and 80 trays/min) with precise and accurate movements, flexibility and durability.

To ensure that the equipment meets all expectations where Brenton and its customers are concerned, Brenton fine-tunes, calibrates and tests each machine thoroughly before they leave the factory floor with the aid of the 20/20 Hindsight system from Monitoring Technology Corp. (MTC, or www.2020hindsight.com on the Internet). The cautiously watchful lens of the Hindsight's video camera monitors the packaging equipment's every move. Brenton builds machinery to perform for many years, keeping customer packaging lines running smoothly. Now, it can troubleshoot potential causes for equipment troubles more quickly and easily, with the new video motion-analysis system. Brenton began using 20/20 Hindsight in April to test and calibrate a variety of the equipment it builds. To be highlighted at this year's Pack Expo International show, the digital system is nonlinear, which means it is capable of recording, playing back and reviewing live events simultaneously.

Live and on camera
According to MTC president/COO Jim Dechman, a line operator can set up the camera to focus on a portion of a production line or machine suspected of acting up. After a jam, for example, the operator can replay the video and fix the problem. "The system can make high-speed video available to everybody in the plant," Dechman says.

This is a key advantage in terms of allowing customers the ability to review a process in slow motion or freeze a frame to spot problems on-the-fly, without missing a subsequent event. The "video footage" is automatically recorded to a PC hard drive. Users can move a cursor to scroll through the recorded video and play an event from the PC's hard drive.

Interestingly, Brenton found out about the video system through one of its top customers of case-packing equipment, the Hair Care Div. of Procter & Gamble Co. Besides for factory acceptance tests, Brenton's personnel can use the video system in their own plant to make optimum adjustments prior to shipment, before the startup of equipment at a customer's site. It can also be used in the field to troubleshoot the equipment at its final destination. P&G's business unit, which suggested the video recording system to Brenton in June, '01, showed it to Brenton during a vendor acceptance test (VAT). After seeing that unit, Brenton purchased one, and P&G has since purchased more than a dozen of the systems for use worldwide.

"P&G brought its own 20/20 Hindsight system to a vendor acceptance test we held at our factory," recalls Ted Prescott, applications engineer, for Brenton Eng. "Using the system, they were able to clearly watch key transfer points in slow motion. 20/20 Hindsight works well to debug different areas on a machine. It's a pretty sophisticated unit. When we happened on it, we were building case packers for P&G that remove bottles from a feeding system and place them into shipping cases before the cases are sealed. What a powerful tool. We immediately purchased one for our own use."

Brenton currently has one unit that is rolled from one packaging machine to another. "We may use it on a robotic unloader, for instance, that removes bottles from pucks," says Prescott. "We can aim the camera on a potential trouble spot to see how that motion looks and how the bottles perform. The system monitors the location, and we view the footage to see what the problem is and can then fix the problem and go on to the next area. It's a pretty quick and easy process."

20/20 Hindsight consists of a computer capture station, a standalone CRT or a thin plasma display monitor, a PC, a mouse, a keypad, a camera and a lens with a mounting arm, a power supply, light, an external trigger interface with a power supply and a wheeled cart. Software operates with a 32-bit Windows 2000™ system, a three-tier client/server-based distributed DCOM/Active X architecture and a Microsoft™ SQL database. Sounds complex, but Prescott says it's quite a compact and straightforward setup.

One of a series of multicamera systems MTC offers, 20/20 Hindsight captures and replays events in detail by recording video signals displaying the contents of what are called buffers while recording is in progress.

Able to archive more than 500 events, the system allows an operator to view an event that occurs in the buffer and manually mark that event for archiving. An actual movie can be made by an interface to a control system, a process sensor or a vision-analysis system. A database then stores the event information for easy review of event history.

Recalls Chris Froah, packaging engineer for Procter & Gamble, Cincinnati, "We purchased one of the MTC Hindsight units about a year ago. We were using it during a VAT for a case packer being built for us up at Brenton. The advantages and significant time savings that the tool provided made Brenton think about purchasing its own system."

Records 60 frames/sec
While recording speeds of up to 60 frames/sec are possible, the system also offers users an ability to select additional frame rates of 10 and 35 frames/sec. These slower frame rates allow users to increase the time stored in the circular buffer. Depending on the frame rate selected, 20/20 Hindsight will adjust the size of the circular buffer. Faster frame rates require more data storage over a period of time, and therefore have a shorter buffer (up to nine hours). Slower rates fill up disk space at a more leisurely pace, so produce a 48-hour buffer.

"This means the most recent nine-plus hours of video are retained at full frame rate," explains MTC's Lenny Fiore. "After nine hours, the oldest video footage is replaced with the newest nine hours. At anytime, portions of the video (movies) can be saved to the database to be viewed later or off-loaded to a CD for widespread viewing."

Since it's monitoring constantly and has a long buffer, the system will catch any jam that occurs on video. Recording at 10, 30 or 60 frames/sec, and instant replay of a line transfer, upset or jam in slow motion, makes troubleshooting a breeze, Prescott says. "We use this for almost all of the machines we build. It helps us fine-tune case-gluing patterns, for example, spots inadequacies in a part, or any catch points on a line, and monitors case operations that move within tenths of seconds, and we can also prove a particular idea or concept with it."

A long buffer of the most recent video footage, plus the ability to scroll through recorded material provided by the patent-pending ScanBack technology are two of the features that impressed Brenton.

An integral camera control in the software for zoom, autofocus and the Pack And Go event-sharing feature via the use of a CDR drive make the system easy to use. Clicking on the Pack And Go button opens a dialog that facilitates the export of video clips to non-Hindisght workstations.

Freezing motion, showing exactly what happened and why, the camera MTC furnished to Brenton is a 1/4-in. CCD color, 128-power-zoom unit with PC remote control of zoom, shutter, gain, line lock and brightness. With a 1/100,000-sec shutter speed and a 640 x 480 pixel resolution, the camera can be pointed at a potential problem location on a piece of equipment and set to play. After a jam or other event, the ScanBack replay feature will show the jam in actual slow motion.

To view recorded video via ScanBack, Brenton personnel slide a playback cursor back in time or click on events that have been marked in a video scroll bar. The system replays archived video on a CPU at four different speeds or can be scrolled until it reaches the right location. And, through the ScanBack feature, it continues to record at all times, even while viewers are watching previously recorded video.

Prescott says weeks of troubleshooting are eliminated today. In case-gluing procedures on a case packer, the Hindsight system allows Brenton's technicians to perform functions such as accurately timing the glue jets on an adhesive applicator, so that the right amount of sealant is placed precisely in the right location on the sealing tabs.

Easy access
The system can be accessed and navigated remotely using a Local Area Network (LAN), a Wide Area Network (WAN) or the Internet. The Client software replays video on the hard drive or though a wireless network, allowing the system's mobile cart, which Brenton uses, to be accessed at an operator station without the need for extra cable.

Mounting the camera over one of its tray packers, for example, Brenton operators can manipulate the camera views, identify important frames of interest and control the system's operation with a set of command buttons included in the software program. Movie displays can be played in steps of single frames or in units of seconds, minutes or hours.

Selected events and a light viewer are "packed" into a CD or hard drive and can then be "unpacked" on any workstation for immediate viewing. The camera setup button invokes the remote-camera setup dialog, which allows users to control camera settings from within the software. Save Frame and Capture Setup buttons are also included, along with a host of other features. A Magnifying Glass feature allows the viewer to zoom in on a particular spot on the screen viewing area.

Quick ROI
"This particular camera allows us to test and calibrate all sorts of mechanisms, and our technicians watch the operation at normal speeds to make adjustments or realign without having to slow down the machine," Prescott says. "If necessary, we can also slow the motion down and play it back and monitor it for just about any length of time." According to Prescott, the return on Brenton's investment was quick, because of the limited training needed and the ease of use.

"The system paid for itself in less than six months in terms of testing time," he says. "We could have spent perhaps four weeks' time tracking down one problem before we found this system, but now we can solve a problem in hours or days. I don't have exact figures, but our troubleshooting costs are much lower than before.

"We're hoping to get a second system that we can take on the road from site to site, so our engineers can use it to troubleshoot a situation anywhere. On top of that, we're also trying to let people know where we got the system, if they're interested in buying one of their own."

With so many advantages, the picture the system produces is indeed worth a thousand words to Brenton operators and maintenance personnel, who can now communicate a problem they spot quickly and easily.