The true cost of counterfeiting and piracy 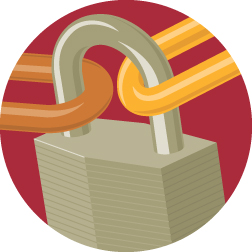 Counterfeiting and piracy cost the U.S. economy from $200 billion to $250 billion per year and a total of 750,000 American jobs, and pose a threat to health and safety. From DVDs, CDs, shampoo and batteries, to car parts, prescription drugs and electrical equipment—every product in every industry is vulnerable.

Once viewed as "victimless crimes," counterfeiting and piracy have mushroomed in recent years. Since the early 1990s, trade in counterfeits has grown eight times the rate of legitimate trade. Counterfeit-related seizures by the U.S. Customs Service rose 125 percent during the past five years and are up 80 percent from 2005 to 2006 alone. The sale of these dangerous and defective goods has far-reaching consequences for our lives and our economy.

Small businesses are especially at risk because they often lack the ability and resources to protect their trademark or copyright. For example, Eastman Machine Co.—a fourth-generation, family-owned, small business in Buffalo, NY, that manufactures manual and automatic cutting machines—had its product line counterfeited by a Chinese manufacturer. As a result, Eastman's legitimate product was almost completely pushed out of the world's largest market for cutting machines. While the counterfeit product thrived, Eastman itself had to layoff nearly two-thirds of its workforce.

Because of the importance of small businesses like Eastman, the U.S. Chamber of Commerce, the world's largest business organization, is fighting back to protect industry and consumers and to make intellectual property protection a national priority. With more than 20 people on staff dedicated to the issue and a broad-based Coalition Against Counterfeiting and Piracy comprising more than 235 associations and businesses representing a wide range of industry sectors, the chamber is leading an aggressive global effort to thwart this growing threat.

For example, this month, the chamber will release the "No Trade in Fakes Supply Chain Tool Kit: Protecting Businesses, Consumers, and Brand Integrity." This important document showcases proven strategies that companies, both small and large, can use to protect their supply chains from counterfeiters and modern-day pirates. The only document of its kind, the tool kit includes a best practices guide and seven case studies of companies—including Bendix Commercial Vehicle Systems, New Balance and Purdue Pharma—that offer techniques to fight back against counterfeiting and piracy. In addition to the tool kit, the chamber will host a series of webinars to further educate small and medium-size enterprises about supply-chain security.

Real people are being affected. The time to act is now. Industry and government have to attack this problem on multiple fronts through education and enforcement. Only then can we make real progress and make the world a miserable place for counterfeiters and modern-day pirates.

Caroline Joiner is the executive director of the Global Anti-Counterfeiting and Piracy Initiative, U.S. Chamber of Commerce. To learn more about the chamber's efforts or to join the fight against counterfeiting, visit www.thetruecosts.org.