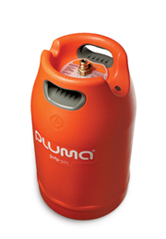 It's incredibly appropriate that creative packaging for critical utilitarian products should receive as much notice by the people who design, make and write about them as by their users.

Long-overdue praise for how packages are used and how they can dramatically improve conditions for real people is arriving. It's taking the shape of top awards in the annual, now fully international, competition hosted by the Industrial Designers Society of America (www.idsa.org).

From a field of just under 1,500 entries—fully a third of them from design firms outside the U.S.— judges evaluated packaging and graphics in one of a dozen categories, picking just three: one gold, one silver and one bronze.

The gold winner is named for a symbol of the lightness of being, Pluma®, the Portuguese and Spanish word for feather. It's also the tradename for a canister holding propane gas sold domestically in Portugal by Lisbon-based Galp Energia.

But the canister, designed by Brandiacentral (www.brandiacentral.com), is as unlike the traditional metal gas cylinder as a feather is unlike a stone. First of all, at a 7½-kg tare, it's about half the weight of a traditional steel cylinder before filling with a 13-kg volume of propane gas.

Brandiacentral industrial design team director Rui Sampaio de Faria points out to PD, “Pluma, which is constructed to international standard N12245, is a unique design that offers high standards of functionality and ergonomics exceeding those of any rival product anywhere in the world.”

The new container, he continues, “combines the safety and strength of traditional steel cylinders with the lightness of a new generation of cylinders made from composite materials.”

Produced by Amtrol-alfa (www.amtrol-alfa.com), the cylinder starts with an inner pressed steel plate liner less than 1 mil thick, entirely coated with layers of Twintex® polypropylene compound fiber from Saint-Gobain (www.saint-gobain.com) and continuous glass fibers, surface-finished with a white gel coating, de Faria explains, “giving it strength and safety performance greater than those of traditional cylinders.” The outer “skin” is a full jacket made of four parts: the body, the base and two identical carry handles injection-molded of high-density polyethylene for functionality, sustainability and ergonomics resulting from easier handling and what de Faria calls “its social aspect.” The exterior surface of the distinct, reddish-colored shell is heavily grained, imparting a warm touch that goes with the gentle curves of its geometry.

In addition, the tradename, distinctive configuration and color all combine to blend as a unique brand identity for the product category and give Galp Energia a dominant domestic presence as both producer and distributor throughout its trading area.

To any person prescribed sequential drug therapy or oral birth control products, unit-of-use packaging is as old as the pill technology. But to lab technicians handling fragile, genetic testing materials to detect critical pathogens, this concept can burst on the scene with the sudden, startling discovery of gravity.

But gravity is part of what Cepheid of Sunnyvale, CA, is about. The company is involved in an extensive series of liquid reagents used with its gene analysis systems. Laboratories use these systems to quickly test for pathogens, including anthrax, avian flu and cancers. Obviously rapid results are potentially life saving.

To improve system efficiency, Cepheid developed a proprietary lyophilization technique, freeze-drying the reagents into 2.6-mm beads. The high-value beads were then shipped in bottles or test tubes like those used for the liquids, to be removed as needed in the laboratory by a technician with tweezers. That was the problem: The beads are fragile and present static problems as well, PD learns from Cepheid fellow Ron Chang. “The beads puncture easily. They have to be separated, stored and shipped under special conditions,” he says. The little beads, which he says resemble foamed styrene balls, are by every measure, big-ticket. One can cost up to $50. Not to forget the issues of contamination or accidents that can occur when one is crushed prematurely before reconstituting in water. 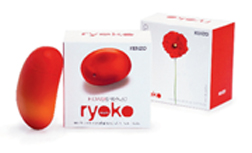 A PP spray bottle with mating overcap for Kenzo Parfums is shaped like a pebble.

Chang carried the problem to bioDesign (213/949-9217). With the idea for an innovative container to store and dispense the beads without tweezers or other tools being uppermost, bioDesign principal Steven Montgomery worked to find a solution that cues the lab technician to use the package as intended by Cepheid.

The solution starts with a proprietary, rigid, multicavity anti-static tape, originally developed to hold microchips, looped into a perfect circle, to seat the beads. The transparent outer case components, made with polycarbonate and acrylic, are molded to sandwich the tape holding the beads. At 1 o'clock, a ratcheting wheel turns counterclockwise, engaging the tape loop to rotate in a clockwise motion.

Gravity does the rest. A tapered aperture at 6 o'clock permits the bead to drop for quick access. Its orifice is protected with a clear clip that deters contamination and serves as a reclosure after the bead falls into the vessel where it will be used. There are 20 numbered stations, with an empty pocket in the loop so no bead can make its way into the aperture prematurely.

The dispenser, produced by Pacific Plastics & Engineering (www.pacificplastics.com), has at its core a small desiccant pad produced by Multisorb Technologies (www.multisorb.com) to protect the hygroscopic beads.

Face and back pressure-sensitive labels, made with a 3-mil matte white PP film, a permanent adhesive and a 40# kraft liner, are printed offset in three PMS colors and given a UV varnish. Initially produced by WS Packaging Group (www.wspackaging.com), they are now made by Best Label Co. (www.bestlabel.com). The container, known as the Cepheid SmartBeads™ dispenser, measures a compact 2¾3¾ in.

“Originally,” bioDesign's Montgomery recalls, “every possibility was considered to develop a reusable dispenser, but local and federal regulations require that laboratory consumables be disposed of as potential biohazards, promoting a greater good of biohazard safety and welfare for both user and community.”

Even so, points out Cepheid's Chang, the dispenser's components are made with two recyclable polymers, though as a disposable package, it fulfills every criterion set for it.

That it is winning its place in the company and the lab is established by one fact, according to Chang. “Since its adoption in February, it is being used for more than forty of our reagents,” he says. “I have never seen anything catch on so quickly.

“Lab technicians figure very easily how the dispenser works, and then they're astonished to know that the dispensers don't involve any additional cost. Actually, the cost of the dispensers versus our previous packaging is a wash, but the dispenser has a premium look and all the other good things going for it.”

Along with allowing precise, sure and waste-free dispensing of the beads, the container also lends itself to Cepheid's expansive series of reagent beads, Chang notes. “People don't read labels,” he says. “So we color-code each label to guide the technician to proper product use.”

The only question technicians have about the new dispenser, he reveals, is “Do we really get to keep it?”

Just like a rolling stone, a 20-mL spray bottle from Kenzo Parfums is slipping into airports everywhere. And, slipping into a bronze award from IDSA, as well.

Shaped like a pebble, the injection-molded PP bottle with mating overcap is designed by Karim Rashid, Inc. (www.karimrashid.com) to be a reasonably priced, takealong perfume bottle that introduces Kenzo's fragrances to consumers who are traveling internationally but don't want to travel with Kenzo's glass containers.

At about 331.332 in., it's remarkably compact, and priced at 25 euros—approximately $30. It should appeal to tourists at a time when they're in a buying frame of mind.

It sells under the name Ryoko (Japanese for travel) so its appropriate distribution is limited to duty-free airport shops and at LaBulleKenzo in Paris. It's also color-related to the specific fragrances in the firm's collection: FlowerbyKenzo, SummerbyKenzo, l'EauparKenzo, l'eauparKenzoforhim, KenzopourHomme and KenzoAir.

Suppliers of the bottle and pump sprayer were not provided.