installed packaging equipment that outputs bags of assorted salty snacks, including corn and tortilla chip products. The company packages these under its own brand and many private labels, laying claim to being one of the largest potato chip producers around, with numerous chip flavors and bag sizes (see PD, July, '02, p. 38).

Since Wyandot continually strives to boost product quality and reduce operating costs, and since product demand and a shortage of capacity in Jeffersonville dictated a boost in production output, the plant took cues from the improvements and cost savings of the massive upgrade at the facility in Marion when initiating equipment improvements in Jeffersonville. The new equipment includes FastBack 200A and 50E conveyors from Heat and Control that are nearly identical to those installed in Marion. With the updated model of cross feeder, called the 50E, the FastBack conveyors feed Ishida weigh scales and vertical form/fill/seal baggers, including Ishida Apex 201 machines from Heat and Control and Polaris systems from Woodman Co.

Handle with care
The 150,000-sq-ft Jeffersonville plant splits its operation between processing and warehousing/packaging, filling bags with snacks under its own Munch Matesw label, among others.

The update project began with improvements made to the plant's potato chip lines, which recently also received the same type of FastBack horizontal-motion conveyors.

Breakage reduced
"We first made many improvements on the potato chip lines, 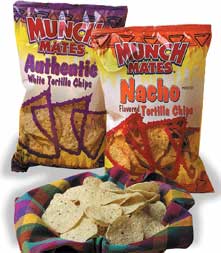 Edmundson estimates that the switch to the smooth-moving FastBacks has lowered chip breakage by as much as 60 percent. While there are no figures as yet for maintenance cost savings on the tortilla lines, he says the FastBacks put into place on the potato chip lines last year saved about $100,000.

Edmundson also pointed out during PD's visit to the plant that the previous maintenance issues created too much downtime–a contract packager's nightmare.

"There were inherent maintenance increases and downtime caused in part by the former aging conveying equipment, so it was time to move on to something else," he says. "In so doing, we eliminated seasoning buildup in the conveyor pans, reduced noise and facilitated scale feeding."

'Everything just flows'
A more centralized layout design of the conveyors provides enhanced flexibility, Edmundson says, because the new conveyors are able to feed any and all weigh scales in the tortilla chip operation. "The horizontal-motion conveying equipment was a good choice, although there are certainly other options out there," he tells PD. "We did evaluate other conveying systems, which were vibratory for the most part. The horizontal-motion FastBack system made the most sense for our needs because it has the ability to start and stop, which truly reduces breakage. We have little to no product breakage any more. The conveyors also stay much cleaner. Everything just flows."

The collection of FastBack conveyors transport the chips delicately, moving them to one of 12 weigher/bagger stations on either side of the main conveyor track that feeds a total of 12 weigh scales and 12 vf/f/s baggers. Outfitted with stainless-steel pans 12 to 18 in. wide and optional end discharge gates that divert product to the shorter FastBack 50E cross feeders, the systems replace a more dedicated and vibratory approach to snack transport.

After the cooked, finished chips are seasoned (if necessary) on three production lines through FastBack Excaliber seasoning applicators and tumble drums, they either head directly to the packaging room, or they accumulate on the three Heat and Control MinuteMan accumulators, if the conveyor isn't calling for product. If it is calling for product, the chips tumble out of the seasoners to be deposited onto a flighted incline conveyor, also provided by Heat and Control. Featuring gentle handing and a large capacity, the MinuteMan systems act as a buffer to minimize chip breakage. Speed is synchronized to coordinate with filling and discharge rates to eliminate any hunt-and-seek problems associated with other conveyors.

Communication sensors are provided to the accumulators by photoeyes from IFM Efector. The incline conveyor leads the chips out of the processing room through the wall to the FastBack systems in the next room.

Once inside the packaging area, which features rows and rows of bag-forming collars racked on one wall, the chips travel onto the 12-ft-high mezzanine level, onto the intricate network of shiny steel crosswork grids. The chips first encounter a stainless-steel 30-in.-wide accumulation conveyor, or "trunk line," before they reach a trio of 18-in.-wide, 108-in.-long computerized-motion 200A distribution conveyor pans that transfer the chips 90 deg to the series of cross feeders.

Sensors on the conveyors direct the chips to flow to the scales calling for the specific product to be packed. Claimed to be the smallest and highest-performing horizontal-motion conveyor available, the 50E cross feeder is said to move at twice the travel rate of most others available.

"This setup gives us the flexibility of adding more trunk lines and scales in the future," plant engineer Rolando Benavidez and production manager Paul Geiser tell PD. Benavidez points out that the feeders are also quiet and compact. The cross feeders each measure 80 to 108 in. long to optimize weigher performance by improving chip transfer from the distribution conveyors to the multihead weighers. As the name implies, instead of by vibration, the FastBack conveyors move the chips by a gliding, slow-forward, fast-back motion that, in effect, "glides" them through stainless-steel pans to the set of 50E cross feeders. Certain vibrations and bounces can create small cracks that can weaken the chips, Geiser explains.

"The smooth motion prevents seasoning from building up, even though we change the lines over frequently. There's no bouncing or vibrating of the chips, which could allow the seasoning to be lost to the bottom of the conveyor."

The 12 scales, which include the new Series CCW-M-214W-S/30-PB weighers and exiting Ishida weighers, are lined up in two rows of six. Product entering each scale is distributed to 14 pool hoppers by a dispersion table mounted on an electronic loadcell that can be programmed for weights of the individual bag sizes. The pool hoppers supply chips on-demand to 14 weigh hoppers beneath them, which then combine the product portions that most closely reach preset target weights.

"The weighing systems are high-speed and feature good control and transition to the baggers," Edmundson points out.

Weighing product portions from 1 to 20 oz, depending on the bag size, each weigher is microprocessor-driven, with digital signal processing and anti-floor-vibration controls for accurate, fast-paced weighing. Overweighments on these scales are quoted to average less than 1 g, with no underweights for bag sizes from 1 to 24 oz.

Product is then deposited down into the bagmakers beneath the weighers, which are individually controlled, allowing an operator to gauge specific line performance and make variable adjustments as needed, such as feed capacity and package size.

A Safeline Zero Metal Free Zone metal detection system then inspects product just before it's bagged. Positioned above each bagger between the weigh scale and the transition tube of the vf/f/s system, the metal detector overcomes limitations in sensitivity that could result from foil bag laminates, metallized film and other bagstocks (bagstocks are provided by several sources).

The single-tube, microprocessor-controlled baggers are equipped for nitrogen flushing for those products needing longer shelf lives. Allen-Bradley SLC 505 programmable controls link to the many touchscreen terminals on the lines.

Benavidez says that one user-friendly touchscreen controls each bagger/scale system. If a problem occurs on a particular unit, the bagger will cut off operation, and the conveyor feeding that machine will receive a signal to halt. "The controls have color touchscreens and are very operator-friendly, which we need," he says. "We get an overview of one line or all of the lines."

Rolls of bag material are activated by a power unwind and advance down over each vf/f/s bagger's forming collar and may be code-dated by a Norwood or Markem ink-jet coder, depending on the bagger, and/or can be spot-labeled by an EPI pressure-sensitive label applicator, depending on customer requests.

As a seal bar creates bag side seams, the open-topped bag is ready to be filled, as product is also inspected through the metal detector. The product is dispensed through each bagger's forming tube and into the bags. After filling, the sealing jaws close, heat-sealing the top of the previous bag and the bottom of the next, and a knife cuts between these bottom and top seals. The jaws retract to release a sealed bag to a short takeaway conveyor and packoff table from Smalley Mfg.

The bags are then case-packed manually in preprinted shipping cases from customer-specified sources. The cases are taped closed on assorted Marsh gummed tapers and bar-code-labeled on Prodigy labelers from Datamax. At this point, the loads are palletized by hand in a choice of load configurations, again dictated by the product and customer specifications, and forklifted to the warehouse. "The reason we continue to case-pack and palletize manually is that, with such an immense volume of skus that require short production runs, we're changing case configurations all of the time," Edmundson tells PD. "We haven't found a way to effectively handle this automatically."

Quick turnaround
Edmundson explains that the plant has been expanded several times since Wyandot acquired it in 1980. It packs an astounding 2,500 stockkeeping units, so quickly changing products over on the lines is imperative to this contract packager's existence. "We don't store anything here," he says. "Our inventory turns weekly, so nothing needs to be stored. Since we specialize in many products, we make everything to-order."

The lines may be changed over as much as four times a week from one product to another, and at least five times a day for other reasons, such as switching bag sizes.

Changing bag sizes is a matter of switching bagstocks and inputting a few keystrokes on the PLC's operator touchscreen panels to indicate new parameters. For the most part, the packaging equipment automatically adjusts to accommodate the new parameters. The conveyors don't require any mechanical adjustments. If moving from one product to another, the people on the line clean the conveyor pans and may need to change mechanical parts on other equipment, such as the bag-forming collars on the vf/f/s systems. During production, an operator selects a recipe on the touchscreen for bag size and product variety, and the system recalls the values to adjust the bagging equipment automatically.

Running so many products in short amounts of time, the plant required its new conveying equipment be installed quickly, with as little production loss as possible. With its Rapid Deployment System (RDS), Heat and Control designed and built the complete support platform for the conveyors, weighers and bagmakers to minimize installation time. All of the equipment could be installed within 19 days–half the time needed to install a conveying system such as this conventionally.

"We were up and running, in full production the first day," Edmundson sums up. "It was the best startup I've seen in twenty years. The return on the equipment investment will take approximately four years. That's not a long time, considering what we put into the operation and its complexity. It's really a testament to the equipment and our people here."