Machine vision companies have overall positive business expectations for 2013 business in Europe. In a quick survey conducted by the European Machine Vision Assn. (EMVA) in October, 56 percent of the participants expect their own business to grow above five percent next year, and another 13.3 percent think their sales will increase up to five percent. Only eight percent of the participants expect their company´s business to decline in 2013. 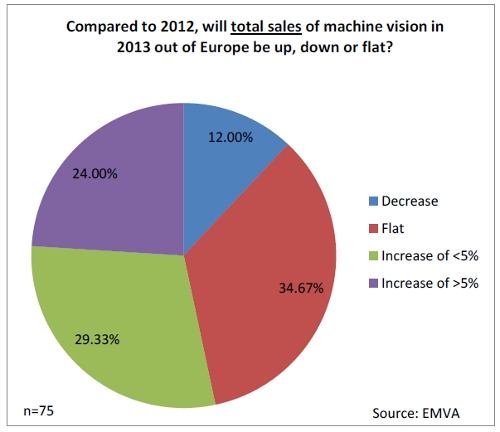 Asked about the development of the entire European machine vision industry, 53.3 percent of the participating companies said that they expect total sales to increase next year. A good third of the companies (34.7 percent) expect 2013 to be a flat year for total turnover of machine vision and 12 percent of the participants think total turnover will decline next year. By this, the overall perception of industry performance 2013 is even better than it is for the current year 2012.

Regarding turnover of the various product types, sophisticated vision systems get the highest confidence to be more sold next year than in 2012: 64 percent of all participants think that business of application-specific and configurable vision systems will go up in 2013, only eight percent each believe it will be flat or going down, respectively.

Interestingly, smart cameras, compact systems and vision systems—which were supposed to grow over average in recent years due to their ever increasing price/performance ratio—are expected to see positive business development next year at a lesser rate of only 53.3 percent. However, this is still the majority, and only eight percent of the participants believe that sales will decline here in 2013.

In the product category of vision components, sales of cameras are seen to grow in 2013 by a majority of 53.3 percent of the participants. 21.3 percent expect the camera business to be flat compared to 2012; and a minority of 6.7 percent expect total turnover of cameras to decline next year.