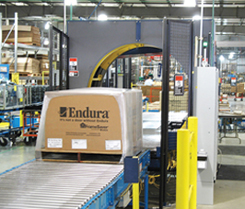 Fast-growing Endura Products, Inc., the nation's leading manufacturer of entry-door components, takes pride in its high quality products and state-of-the-art manufacturing plant. The company produces more than 4 million door sills a year at its plant in Colfax, NC. But in recent years, the company has faced challenges in its end-of-line packaging operation. Among the issues were the integrity of shipped orders, worker safety and an inefficient palletizing operation.

“We had an unacceptable level of freight claims for our door-sill products due to insufficient packaging and insecure loads,” says Troy Lee, industrial engineer for Endura. “We were incurring additional handling costs for processing the claims, sorting them and then reprocessing the orders back to the customer. Not to mention the headaches of a now-late order to the customer. We knew there had to be a better way.”

Endura turned to xpedx (www.xpedx.com) to help solve the problem. xpedx, a leading distributor of packaging supplies and equipment, has 350 packaging specialists and technicians at more than 100 locations across the U.S. and Mexico. xpedx works with manufacturers to help them reduce costs and improve quality and efficiency across their packaging and logistics operations. Over a period of four months, the xpedx team visited Endura's plant, analyzed the palletizing operation, sat down with management and production employees, had several brainstorming sessions and eventually hammered out a solution with far-reaching benefits for Endura, some of which were unanticipated. The xpedx team included Steve Gibson, systems sales engineer based in Morrisville, NC; Larry Shircliffe, equipment specialist, Joe Guella, account manager; and Terry Hutchins; systems project manager. 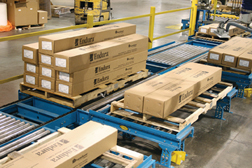 Among the benefits of the new palletizing and conveyor system are a 90 percent drop in freight claims due to shipping damage and a safer work environment for production personnel.

In Endura's palletizing area, production personnel, forklift traffic and 20 pallets of various sizes shared a very confined area on the production floor. As cases of product became available for customer orders, an operator would use a vacuum assist to move the cases to the correct pallet and build the load until the orders were ready to be transported to the shipping area. Once a load was complete, it was red-tagged for the forklift operator to remove. “The problem for the forklift operator,” says xpedx's Gibson, “was that the completed pallet could be in the middle of a cluster of unfinished pallets. The operator would then have a choice—either leave the pallet in place until the other pallets were complete, or move partial pallets out of the way to get to it. Either way, this created significant inefficiencies and required multiple handling of pallets.”

A typical order was moved five to seven times before it reached the shipping area. The frequent handling created ergonomic issues for the palletizing operator, as a result of excessive bending and moving the pallets around. Once pallets were built, they were manually strapped, using hand tools to apply the strapping and corner boards to protect the load. “The process was time-consuming and inefficient,” Gibson says.

Initially, the scope of the project envisioned by Endura was to automate the movement of pallets from the palletizing area to an automatic strapping system, Gibson says. Instead, after a careful analysis of the situation and close consultation with Endura, xpedx recommended an alternative approach utilizing a Lan-ringer automatic stretch wrapper from Lantech (www. Lantech.com) and a Hytrol Conveyor Co., Inc. (www.hytrol.com) conveyor system to transport the pallets. The Lan-ringer was chosen instead of a strapper to provide increased load stability.

A core strength xpedx brought to the installation was to design a customized control system and write the program to run it. “The key issue in the design of the control system is to develop a system that not only controls the machinery—the starting and stopping—but also provides a smooth and user-friendly interface between the operator and the equipment. This control system was as important as the hardware and was 100-percent designed and programmed by our project manager,” Gibson says. 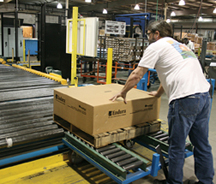 Operators control the flow of pallets onto the conveyor system as soon as they are completed. The conveyor transports the pallets through the stretch wrapper, after which it delivers them to the shipping area.

Automating and revamping the palletizing process was a challenge. “The issue was: How do you get that many pallet positions into the geometry of a very tight space and create a safe working environment for the operator?” Gibson says. The xpedx team went through numerous iterations before achieving a design that worked ergonomically, fully addressed the material handling issues and produced an acceptable return on investment. With the new system, operators control the flow of pallets onto the conveyor system as soon as they are completed. The conveyor transports the pallets through the Lan-ringer, where the load is stretch-wrapped, and it then delivers them to the shipping area.

From the time the load is stacked on a pallet, it travels on the conveyor without any human touch through the Lan-ringer to the shipping area. Lee, of Endura, says the results of the project with xpedx exceeded expectations. “The value of the system is evident as we enter our sixth month of operation,” Lee says. “It was well designed, well planned and is a huge success and improvement for Endura and our customers.”

Benefits to Endura include:

Lee praised the xpedx team for its “ability to think outside the box and use their depth of knowledge from what they've seen in the industry” to create a robust solution. “The response time by the xpedx team to issues that came up during the project was the best we've ever seen on a project of this scale,” Lee adds.

The xpedx team is sharing other ideas for continuous-improvement projects that will help Endura maintain its competitive edge as an industry leader. Endura was so impressed with xpedx and the success of the project that at the end of April, the company ordered a second Lan-ringer for its wood plant. “We're pleased to see Endura take advantage of this opportunity to replicate the efficiency, quality and safety benefits in other areas of their operation,” Gibson says.