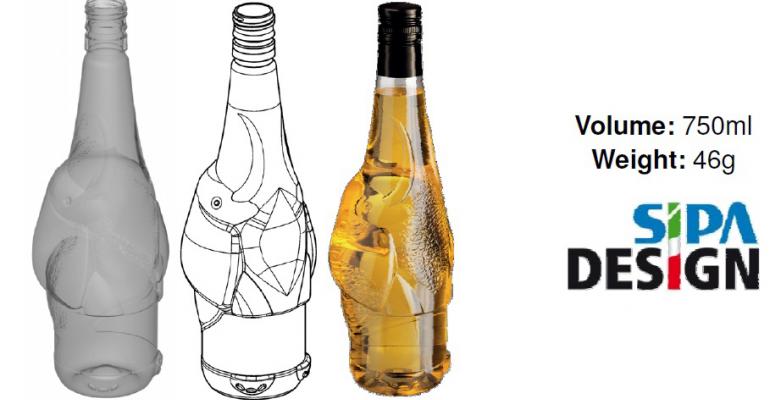 Key steps in the elephant bottle design process are illustrated.

In our recent poll on 3D printing for packaging, we asked poll-takers about the most interesting 3D printing project they’d see. There were several intriguing responses, including one that pointed to a 3D-printed elephant bottle that was referenced in our report on the poll results.

That turned out to be the tip of the iceberg—or rather of the elephant’s trunk—because as I’m sure you will agree, we had to find out more.  And we did—a lot more, which results in this article done with the invaluable assistance of the project’s team members at SIPA Sp.A., who are identified at the end of the article. As a brief backgrounder, SIPA, based in northeast Italy in Vittorio Veneto, is a division of Zoppas Industries and has 20 years’ experience in plastic container manufacturing and filling.

How long has SIPA been involved in 3D printing?

SIPA: SIPA has been interested in 3D printing ever since the start of this type of technology. Only since 2012, the team began seriously searching for a 3D printer with specific characteristics for the 3D printing of bottles. The dimensions and complexity of the bottle shape as well as its transparency were the main features considered. Therefore there was a need to have a certain size for the working chamber and certain materials used. Also considered was the work to be done on the printed bottle.

Several examples of 3D prints of a bottle were made with different printers using different polymers. Most polymers were colored and opaque. Advantages and disadvantages of every print were analyzed.

Knowing the theoretical benefits, at this point a decision was made to start with an “entry-level/basic-version” printer that would provide a quality [commensurate] with the cost of the apparatus with the intention to acquire experience.

The idea also with a simple printer was to investigate the complexity involved in printing various formats and shapes of bottles.

What was the timeframe for the elephant bottle project?

SIPA: For the Brau Beviale 2014 exhibition held in November in Nürnberg, Germany, the team wanted to present an example of premium design capability. Based on research and proposed ideas, after a brain-storming session as consequence of some customer requests for  something amazing from both a “fashion” and “technical” point-of-view, it was decided: “why not an elephant bottle!”

To demonstrate SIPA’s ability to quickly response to a request, the difficulty was to combine the design with the industrial processibility within a minimum lead time.

The idea was to represent in a natural way the shape of this animal in its environment in Africa while keeping in mind the capability of SIPA blow-molding machines.  It was suggested to consider an elephant on its hind legs that is reaching for the top leaves with its trunk.

The project ran from September to October ahead of the fair.

Why use a 3D printer for this project? And how often does SIPA use 3D printing?

SIPA uses 3D printing every time that a client requests to see a 3D representation of the bottle design proposals before choosing the definitive bottle. The 3D printing is also used internally for specialized design projects like this one.

At what point in package development was 3D printing used?

SIPA: The packaging development proceeded with the production of several sketches, three of which were transformed into technical designs. Even with the design renderings, it was hard to see which would be more appealing in terms of shape and degree of detail while at the same time having industrial applicability. There were various opinions even as the deadline was approaching.  It was then that we decided to use the 3D printer.

The three designs were printed at a smaller scale to have the results in a short time before producing the mold. It had to provide a compromise between time and technical results, i.e., seeing advantages and precision in the stability and shape of final bottles, the label zone and other details.

From the three 3D prints, shown below, various aspects were analyzed. It took approximately six hours to print out each bottle due to the size limitations of the printer’s chamber. 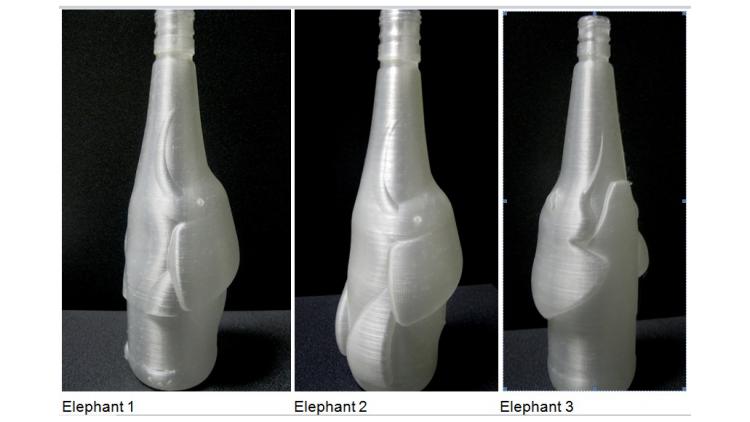 The 3D printing of the designs helped the team to decide on the processibility, performance and aesthetics of bottles. The 3D print of Elephant 1 was chosen to have the overall quality as requested. It was decided after looking at the printed bottle to include texture in some of the smooth areas to highlight the roughness of an elephant’s hide.

Next: Information on the polymer, an image of the end result and future plans 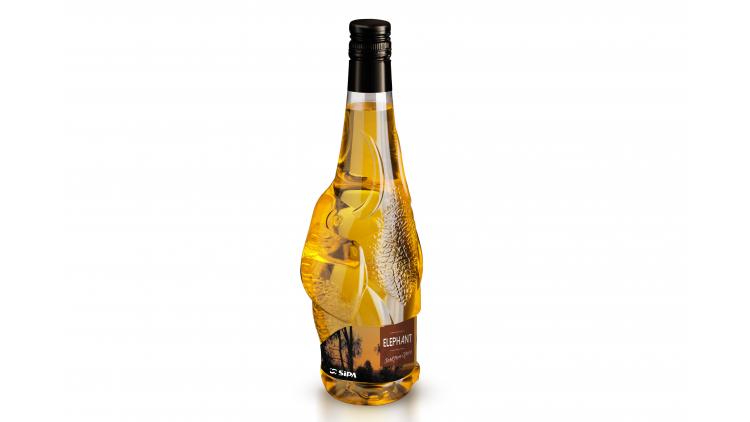 The end result of the project: A filled, sealed and labeled PET bottle that was presented at the fair.

What printer(s) and filament polymer were used?

SIPA: We used the entry level printer mentioned earlier, though we prefer not to mention the type or manufacturer. This arrangement was sufficient for acquiring the experience and knowledge necessary to focus on a future acquisition of a more elaborate printer.

We used a polylactic acid (PLA) polymer filament.The polymer PLA produces neutral color, slightly transparent bottles. Other filaments were tested, but the preference was to use PLA because it is among the easiest-to-use polymers handled by the printer.

Another aspect that was evaluated was also the post-printing treatment to be done on the printed object.

What was the end result?

SIPA: After the analysis of the 3D prints, the mold was developed and manufactured and then inserted into the blow-molding machine so that samples for the Brau fair could be made. [Preforms with the special neck were produced by SIPA.]

The photo above shows the final result. The bottle possessed all the aspects considered during the development and those seen in the 3D print.

About 200 production bottles made of PET were blown. A few samples were displayed at the Brau trade exhibition and elsewhere such as the National Plastics Exposition (NPE) in Orlando, FL, in 2015.

Many clients visiting the fair showed a high interest when seeing the elephant bottle.

What are your plans for 3D printing?

SIPA: SIPA has clients who ask for 3D prints of their bottles, which are useful for label design along with the all the other parameters considered in a project.

The entry-level printer that SIPA installed permitted the team to acquire the fundamentals necessary for the printing of bottles and that are helpful in evaluating a new generation of 3D printers that allow superior levels of print quality.

After seeing the usefulness of 3D printing in our R&D development and for our clients’ requests, our plans are to track the evolution of the 3D-printing technology and its versatility for an eventual acquisition.