Thousands of new product packaging hit the shelves in the past year, but out of all those bottles, pouches and boxes, only a select few have been deemed worthy of the 2012 AmeriStar awards.

Produced by the Institute of Packaging Professionals (IoPP), the AmeriStar awards program considers submissions by consumer packaged goods firms and their packaging partners from all over North America. For this year's competition, more than 150 packages were submitted. Judges then gathered at IoPP headquarters to evaluate and analyze packages in 18 different professional categories; student entries also were pored over.

After gauging the entries based on innovation, sustainability, protection, economics, performance, and marketing, judges had the unenviable task of selecting the best of the best. Top AmeriStar winners included the Best of Show Award, the 3M Sustainability Award (sponsored by 3M) and (in a category new for 2012) the Design Award for excellence in structural and graphic design.

The elite group of AmeriStar winners will take a bow at the AmeriStar and IoPP Honors and Awards Dinner, Tues., May 22, 2012, at the Hyatt Regency O'Hare in Rosemont, IL. Visit the IoPP website at www.iopp.org for more information.

For a complete list of the winners, visit www.packagingdigest.com/2012AmeriStars.

Following are some of the top AmeriStar winners, and perspective on the packaging from the people that made them happen. 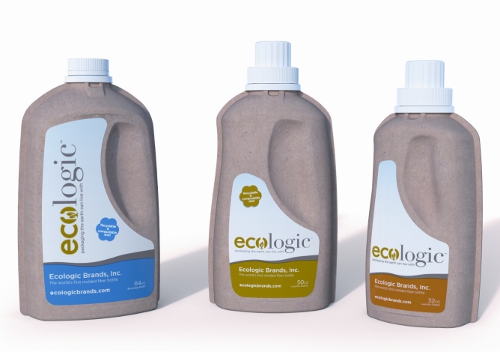 The top winner in this year's AmeriStar awards is a molded fiber bottle by Ecologic Brands, Oakland, CA, made with a thin, internal PET liner. This container, which received considerable attention in 2011, is recognized by IoPP as Best in Show and winner of the 3M Sustainability Award. The patented containers, which were first commercialized in March 2011, are made from recycled and renewable materials, minimize the use of plastic and reduce landfill waste.
In an earlier interview with Packaging Digest, Julie Corbett, CEO of Ecologic, says the use of paper in rigid containers is "a seismic innovation" that consumers have been wanting for a long time. "Consumers don't see a difference between a 10g plastic bottle and a 15g plastic bottle, but they see the difference with a molded fiber paper bottle."

Corbett, originally from Canada, says she was shocked by the amount of plastic jugs and cartons her family produced on a regular basis and the lack of viable packaging choices to solve the problem. She adds that the eco bottle packaging was inspired by her family's involvement in the paper industry and Canada's sales of milk in thin-walled plastic bags that are then poured from reusable pitchers.

The eco bottle uses a molded-paper outer shell made from 100 percent recycled materials (70 percent recycled fiberboard boxes and 30 percent old newspapers) with a thin, fully recyclable interior pouch. The outer shell has been certified to be compostable per ASTM 6868 standards. Additionally, its liner uses up to 75 percent less plastic than rigid plastic containers. The package also offers greater carbon savings because its outer shells can be tightly nested for transport. One truckload of Ecologic Brands' packaging materials is said to be equivalent in volume to up to nine truckloads of rigid plastic containers.

Ecologic Brands' fiber-based bottle was first introduced in the U.S. with the launch of Seventh Generations' Natural 4X Laundry Detergent. The fiber bottle is available in approximately 7,000 stores, including mainstream grocers and mass retailers such as Target, Whole Foods, Kroger and Raley's.

When the concentrated detergent was developed, the eco-conscious Seventh Generation wanted packaging that would convey the brand message of personal and environmental health along with sustainability, according to Peter Swaine, Seventh Generation director of global strategic sourcing.

Swaine told Packaging Digest that Ecologic's idea was not adopted immediately. However, it was felt that the innovative packaging would draw the consumer into the recycling process. Ecologic's ability to apply the spout in a way that would help prevent leakage was a major factor in Seventh Generation's decision to use it. The response since the product was introduced has been strong, Swaine says, adding that, "The molded fiber bottle has been a very differentiating factor." 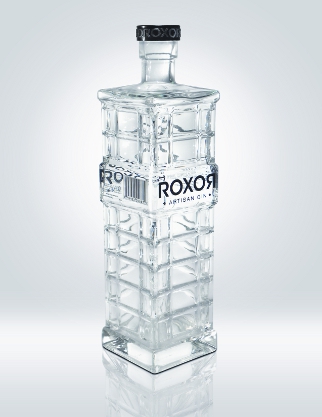 Gin bottle towers above the competition

Because of its ultra-premium positioning, ROXOR gin couldn't be poured into just any plain old bottle.
"ROXOR had to be differentiated from all other spirits brands," says Don Short, owner of New Artisan Spirits, "It's in the gin category, so it still had to fit, but I never wanted to think of the package as just that—a package."

Being a fan of world-class architecture, Short looked to the skylines of the world, drew inspiration from the classic work of renowned architects and came up with the "Skyline" bottle. The 750mL bottle (like its 1.75L brother, the "Skyscraper") is square like many others in the gin category, but it distinguishes with striking details and an elegant profile that bring to mind a luxury condominium building. It features several "stories" and "windows" looking out on the world, and a flat window-pane relief at the bottle's waist serves the dual purpose of providing a surface for the ROXOR label, and creating an effective grip for thirsty consumers.

Because of the detail work and New Artisan's exacting quality standards, the package required specialized packaging. Short and his team turned to TricorBraun to help facilitate the process.

TricorBraun representative Jon Warneke located Gruppo Pavisa, which hand-blows the bottles (made of cosmetic-grade, super-flint glass) at its Mexico City facility. The company, run by three brothers with combined decades of glass design and production experience, met New Artisan Spirits' expectations and production requirements.
"They understood my design vision and took the challenge to make the bottle," says Short.

According to TricorBraun representative Suzie Fenton, the final product is an effective, affecting package.
"The window-pane texture, implying a high-rise condo filled with windows, is an evocative place and visually appealing in its ability to catch the light."

Grupo Pavisa also produced and placed the ROXOR labels. The forward-facing label is a paper-free blend of bamboo pulp, sugar cane and cotton. The side labels consist of a corn-based transparent film. All of the labeling uses eco-friendly soy inks. The lightweight polypropylene closure—festooned with the company logo on top and embossed with the ROXOR name around the edge—is custom-produced by a Chinese manufacturer. The product is bottled in partnership with San Luis Spirits in Dripping Springs, TX. 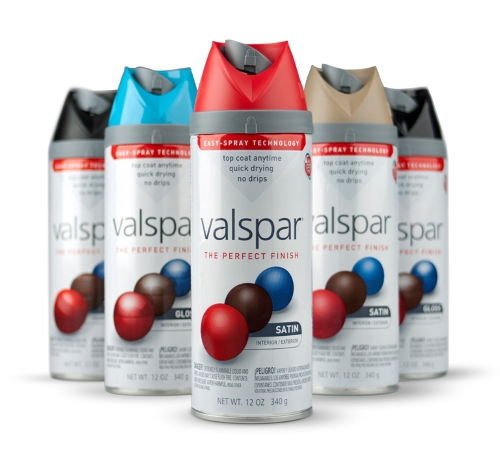 Valspar's promise to painters—professionals and do-it-yourselfers alike—is to "Make It Easy." So when the company designed a new spray paint, it honed in on the No. 1 customer complaint: finger fatigue.

Winning an AmeriStar award in the Regulated Packaging category, the new Valspar Spray Paint reduces digit distress by 35 percent (according to lab results) by providing a larger spray button.

But the sprayer addresses other common issues, such as dripping/spitting and accidental spraying, as well as offers additional convenience features. The patented sprayer is now an integral part of the package. Instead of having to remove a separate overcap, users simply twist the new cap 90 degrees to "open" and "close" it. With an audible click, this built-in twist-and-lock mechanism enables cleaner and safer painting and storage by preventing unintentional spraying.

The intuitive design lets consumers open and close the package without additional tools, eliminating the possibility of gouging the can or their hands. Valspar also conducted senior and child safety testing to make sure that it was apparent and intuitive for seniors to open but still difficult for children.

To prevent sprays in the store (accidental or deliberate), Valspar added a security band around the closure, which was a first in the spray paint category.

Valspar partnered with global design consultancy Webb deVlam to create the disruptive twist-and-spray cap. Launched in the U.S. in September 2011 with international distribution as of spring 2012, this new package will be used across all of Valspar's premium spray paint offerings, including automotive and DIY.

Two better than one
The two-piece sprayer consists of an actuator and an overcap, both made of PP. The color overcap indicates the paint color and finish; the actuator is injection-molded by Summit Packaging Systems in Valspar's signature gray color. Color consistency on the overcap is vital, so Valspar uses virgin material there. But tests concluded that it could use 50 percent post-consumer recycled PP on the gray actuators with no discernable variation seen by the consumer.

The twist-open design means the cap stays on the can throughout the product's life. Yet the PP overcap and actuator can be removed from the can and recycled where such recycling exists. The empty steel container can be recycled, too.

Valspar also controlled the plastic used in the new closure. Although the spray button is bigger, the amount of material in the overcap was reduced by 5g to compensate.

While Valspar's primary focus of the new spray system was to create consumer value, it also realized a production benefit. By integrating the spray button and overcap into one closure, the company was able to eliminate one operator per line shift. And because the new cap is the same height as the previous one, the only change in packaging operations was installing a new capper, which handles both new and old cap styles. No other line operations or supply chain processes—such as packing, warehousing, distribution or in-store merchandising—were affected.

This package also won a 2012 Product of the Year USA award. The largest consumer product award program rewards innovation and is voted on by 50,000 consumers.

"Valspar Spray Paint being named Product of the Year is especially rewarding because the honor is based on thousands of votes by actual consumers," says Jane Ryder, marketing manager, Valspar. "Webb deVlam played an integral role in understanding our consumer and designing for them. The advances we have made to Valspar Spray Paint are based on extensive research into everything people want in a spray paint, so this award really validates those innovations."

Consumers are voting with their pocketbook, too. Since introducing the new can, Valspar has seen a 15 percent or more sales boost in a category that hadn't seen much innovation in more than 30 years.