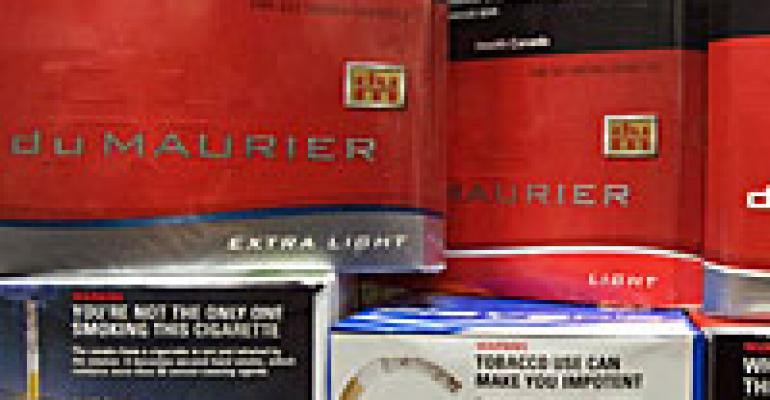 The federal government spent six years and nearly $4 million developing new health warnings on cigarette packages before deciding to abandon them, according to a document from Health Canada obtained by the Canadian Broadcasting Corp.

The document detailing the total estimated expenditures reveals that the ministry spent $3.15 million on public opinion research, contracts and other miscellaneous expenses.

The government also spent $496,000 to develop a national Quitline, a 1-800 number that would appear on cigarette packages.

The new labels were supposed to increase in size from 50 per cent to 75 per cent of each cigarette package.

"Health Canada had obviously been working diligently on this issue for some time," said Ujjal Dosanjh, the Liberal health critic and former minister of health. "And this is just an estimate. There may be a lot more money spent on this when they get the account."

In September, Health Canada halted a widely expected initiative to implement the updated warning labels. In a closed-door meeting of provincial health ministers in Newfoundland, federal Health Minister Leona Aglukkaq said the government would focus instead on reducing the trade in contraband tobacco products.

Health Minister Leona Aglukkaq told her provincial counterparts that instead of new packaging, the government would focus instead on reducing the trade in contraband tobacco products. (CBC)Illegal tobacco products have become widely available in Canada, leading to easier access by young smokers and lost tax revenue for federal and provincial governments.

In a statement, Aglukkaq said: "there's absolutely nothing wrong with taking a step back to re-examine whether we are making the investment in the right place to make the biggest difference within our prevention strategy for young people."

In the years since, many other countries, including Uruguay and Mexico, have brought in warnings that are far more graphic and disturbing than Canada's - and cover up to 80 per cent of the package.

"The problem with Canada ... is that we've had the same warnings on packs for almost 10 years now," said Dave Hammond, a professor at the University of Waterloo who consulted for Health Canada on the development of the new labels. "We've fallen off the pace. What were once the best warnings in the world are now looking stale and very old.

"We don't run the same TV advertisement for 10 years," said Hammond. "Nor should you have the same health warning for 10 years."