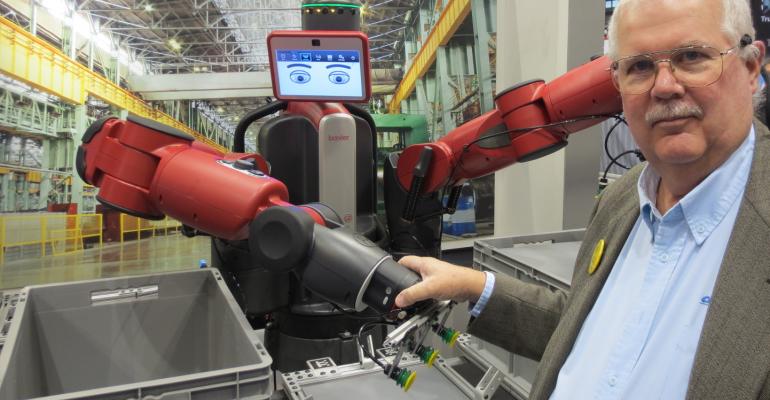 On Oct. 3, 2018, collaborative robot trailblazer Rethink Robotics shocked the industrial automation world by closing down its business. Since then, two companies have stepped up to carry on the company’s legacy. On Oct. 25, German robotic solutions provider Hahn Group bought the defunct company’s robotic technology. And on Nov. 13, competitor Universal Robots hired 20 Rethink employees for its own Boston facility.

Packaging machinery expert and cobot enthusiast John Henry remembers when he first saw a cobot and considers the future of robotics in packaging.

In the summer of 2013, I got a press release for a robot that needed no guarding and could be taught rather than needing to be programmed. It was human-friendly and they were calling it “collaborative.” First time I’d heard the word.

It all seemed a bit fantastic to me. I made a note to see it at the upcoming Pack Expo but I also figured I’d be disappointed.

I wasn’t. It did everything the press release said and more. In three to four minutes, they had me teaching it to identify and pick up rubber ducks then place them in a case. I was hooked. I believed then and still believe that collaborative robots, or cobots, are the future.

Universal Robots introduced its UR series of cobots at the same show and they blew me away too. Since then, virtually every major robot manufacturer has introduced its own line of cobots. At the most recent Pack Expo, it seemed like I couldn’t turn around without seeing one.

Most were in typical robot applications and they do well there. A few visionary companies—such as X-Pak, Dyco and FP Developments—were using the robot as the machine. I think this, along with cobots, is the next stage of robots in manufacturing.

Baxter incorporated a lot of interesting technology besides being collaborative. Most robots need to be programmed from a keyboard. Programming has gotten a lot simpler over the years. It is still programming and still scares people away.

Baxter was taught. Press a button in the arm, move the arm where you want it, release the button. It was that simple.

Robots used to need parts to be precisely positioned for pickup. Cameras have become common as an add-on to “find” the parts. Baxter was one of the first, perhaps the first, to integrate cameras into the robot itself.

Robots generally look mechanical. Combine that with the cages and they can be intimidating. Baxter was designed to look human friendly, as well as be human friendly. Who couldn’t look at the smiling face atop Baxter and not smile back?

On the other hand, Baxter was somewhat slow and not as precise as many people expect from a robot. With only a single model, applications were limited. More importantly, once other bigger and more established robot companies saw the future with cobots, they jumped in with both feet and quickly surpassed Baxter. Baxter’s sibling Sawyer was an attempt to keep up but perhaps too little, too late.

So RIP Rethink Robotics. I was and am a fan of what you did. You made everyone sit up and take notice of collaborative robots. You invented a whole new category and the world is benefitting. That is not nothing.

As for Rethink’s founder, chairman and chief technology officer Rodney Brooks, I am sure we will see him somewhere down the road with another groundbreaking idea. I certainly hope so. People like him don’t sit still for long.