Quality care from processing to packaging 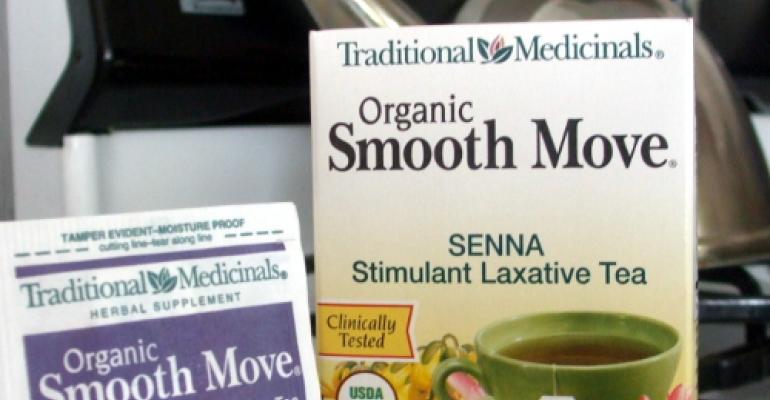 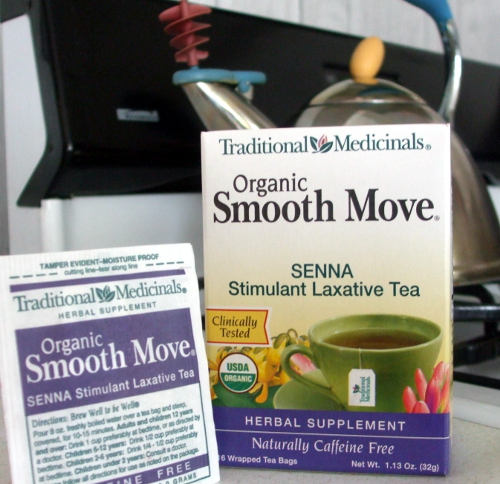 With more than 34 years in the herbal supplement arena, Traditional Medicinals has combined the ancient art of traditional formulating with the modern scientific methods of quality assurance and production.

Located in Sebastopol, CA, the company remains dedicated to preserving the earth's resources, natural and human. A sustainability leader, the company operates using 70 percent solar power and commits to safeguarding its employees by continually improving their work environment.

The facility operates 20 hours a day, four days per week to produce 2 million teabags each week.

Raw materials are brought in from around the world in pre-cut form, reinspected and repackaged into barrel containers to feed into the blenders via a hopper system. Once the formulas are blended, they are transferred manually to the packaging area via barrels where product is gravity fed from a mezzanine level to nine IMA "string-and-tag" machines that process between 135 and 185 teabags per minute in bagging, wrapping and cartoning operations.

In 2010, the company began a five-year business plan, with the objective of becoming the No. 1 medicinal tea company in the U.S., up from its current No. 3 spot. Automation and improved productivity in the plant are some of the methods the company uses to achieve that goal.

As part of that strategy, Traditional Medicinals has ordered a newer-model IMA system, which is expected to be installed by 2013. It offers two big benefits: speed and safety. The new machine is rated to run at 300+ teabags per minute, and it attaches the string to the teabag and tag with a knot instead of a staple. This will eliminate any metal in the package, improving safety and aesthetics. There's a slight sustainability boost, too: The degradable teabag can go right into a compost pile with no extra effort from the consumer to remove a staple.

While working on a major efficiency project that culminated in the building of new rooms for the blending area, plant manager Mary Goff says the company also wanted to cut down the amount of manual lifting that the operators were doing in the production department. In June 2011, a vacuum pneumatic conveyor system from Vac-U-Max was installed to automate this step.

Previously, the operators were weighing individual 100-lb batches into barrels, taking those barrels up to the top level and then dumping them into hoppers by hand. In search of a better method, the vp of quality control and the site manager researched open conveyor systems as an ergonomic solution for transferring the raw materials.

Traditional Medicinals uses pharmacopeia-grade herbs; one of its biggest concerns was how to transfer the herbs and blends from one area to another without breaking down the product or losing any of it.

"We did a lot of studies up front," Goff says, regarding choosing the right systems to transfer ingredients. "We spoke with some of our raw materials vendors about the systems they used to transfer materials and a gentleman from the consulting firm we were working with on the efficiency project told us about Vac-U-Max."

Vac-U-Max specializes in the design and manufacture of pneumatic systems and support equipment for the conveying, weighing and batching of dry materials in the pharmaceutical, chemical and food industries.

Although Traditional Medicinals' herb suppliers warned against pneumatically conveying the herbs (thinking it would damage the ingredients), information from the conveyor manufacturer convinced the company the method was worthy of investigation.

Try before you buy

Although the advantages of the pneumatic system in theory seemed to outweigh the open systems, Traditional Medicinals needed assurance that the vacuum system would perform reliably without breaking down the product.

Vac-u-Max offers testing at no charge to potential customers in its fully functional 6,000-sq-ft test and demonstration facility, which is equipped to conduct a plethora of vacuum conveying tests to simulate actual conditions at a customer's site.

After consulting with Vac-U-Max on system design and equipment specifications, Goff traveled with the vp of quality control and the site manager to New Jersey to test the equipment with 15 of Traditional Medicinal's raw materials. "They spent a whole morning with us running through the testing, making sure that we were happy with their equipment," she says.

"One of our biggest concerns was the breakdown of the materials themselves, and that's one of the negatives that we kept hearing from our herb suppliers, but Vac-U-Max assured us that it wouldn't, and they've proven that it is a very gentle way to move product," Goff says.

During the testing, Traditional Medicinals determined that the three-filter system initially specified for the application was capturing more product than desired so Vac-U-Max came up with a single-system filter instead and adjusted the flow rate. "We were able to get it to the point that we were satisfied with it and that didn't take much effort at all," Goff recalls. The system was installed in June 2011.

Because Traditional Medicinals runs between three and four blends per day in the department, the conveyor manufacturer set the company up with a cloth-type cleanable filter that is able to be cleaned, sanitized and reused. The company has several filters on hand for each blend. 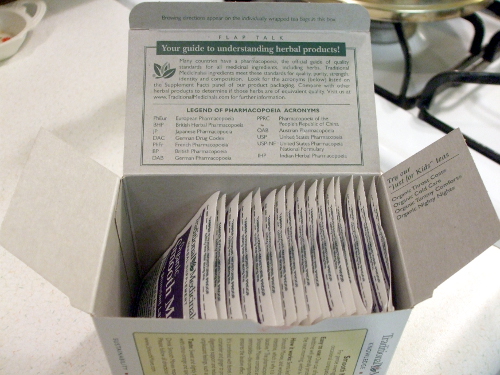 When the new blending area was finished, the Vac-U-Max system was implemented into the process where raw materials are brought in and taken to a second level where they are run through magnets and then scaled into a barrel. The pneumatic conveyor system transfers the product back up to another room, where the system performs as the hopper feed for the blender itself.

Now rather than operators using forklifts to bring barrels up to the mezzanine level and manually scooping materials into the hopper, operators insert a wand into the barrels, and product is transferred pneumatically from the wand to the blenders.

Improved ergonomics: "The system has eliminated all the forklift traffic and, from an ergonomic standpoint, it's saving a lot of wear and tear on our blenders' backs," says Goff.

In addition to creating a better ergonomic environment for the operators, Goff says "the system is more efficient too, and we are really happy with that side of it."

Increased efficiency: Although Traditional Medicinals has been working with the new system only for a short time since performing a full protocol of tests to validate the equipment, process and cleaning procedures, the company has seen about a 20 percent boost in capacity.

Easy cleaning and maintenance: When running three or four blends a day, ease of cleaning quickly becomes an efficiency point when sanitation between runs is required. For this application, the Vac-U-Max system has a food-grade polished surface for effortless cleaning and product flow. And all systems are equipped with heavy-duty clamps that enable quick take apart without tools.

Goff says, "It is very easy to take it apart. We're taking it apart three to four times a day and we change the filter between each blend."

Overall, Traditional Medicinals is pleased with the change. Goff says, "Vac-U-Max was helpful and spent time to make sure the system worked for us. The pneumatic system transferring the materials is a lot quicker and we expect that it will work well when we bring in the higher capacity machine later."

The rest of the packaging line is a series of automatic and manual operations. Once the raw materials have been blended, the product is put into barrels for manual transfer to the packaging room. They are taken to the mezzanine level and unloaded into either a bulk bag or a stainless steel hopper positioned above one of nine IMA machines. A gate opens to gravity feed the blends into the bagger's filling tube.

Bagging, wrapping and cartoning all take place within the IMA machine. After the teabags are filled, the IMA system automatically overwraps each one to better preserve the delicate herbs. From there, they are collated and inserted into cartons in a count of 16. Cartons include an embossed "Best if used by" date and lot number, and both tuck flaps are also glued for tamper evidence.

From there, cartons travel by conveyor to a case packer, where they are packed in counts of six. Cases are sealed and manually palletized. Goff says that they plan to automate this operation in the next three to four years as part of their five-year growth plan.

MAKING A FLAP OVER SUSTAINABILITY 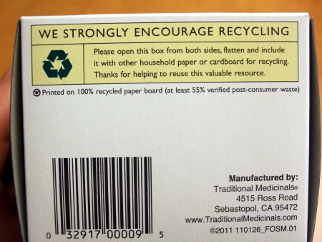 Traditional Medicinals uses all six major panels of its carton—and even the minor flaps and inside—to explain its quality and sustainability messages to consumers. Nearly every surface of the 100 percent recycled paperboard (of which at least 55 percent is verified as post-consumer waste) is printed.

The company touts its "reduce, reuse, recycle" packaging position, designed to minimize the products' carbon footprint. The bottom of cartons carries the chasing arrows logo to indicate recycling, along with the message: "We strongly encourage recycling. Please open this box from both sides, flatten and include it with other household paper or cardboard for recycling. Thanks for helping to reuse this valuable resource."

On its website, Traditional Medicinals explains that used teabags are compostable: "We use tea bags made from unbleached manila hemp (Musa textilis) pulp attached to a cotton (Gossypium spp.) string. You can compost your used tea bags, string and all, rather than throwing them in the trash. They will make great soil later on!"

For 12 consecutive years, Traditional Medicinals has received the Waste Reduction Awards Program award, recognized for its efforts to reduce waste.