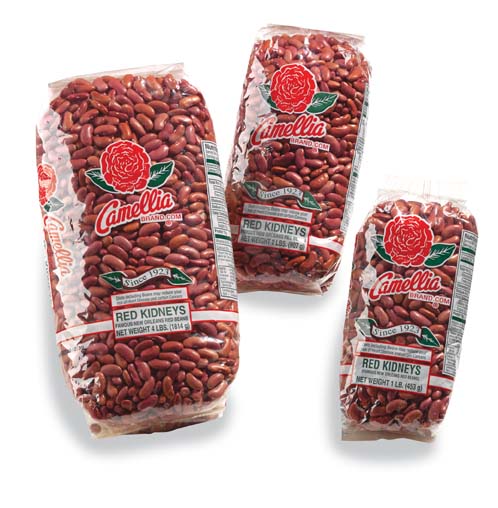 Lucius Hamilton Hayward founded L. H. Hayward & Co. in 1923 in New Orleans and established himself in business as a wholesale supplier of fresh fruits and vegetables. Immediately after World War II, with the advent of the supermarket concept for grocery stores and the packaging and canning of more fruits and vegetables, the company decided to specialize in dried beans, peas and lentils. In 1947, the Camelia Brand was trademarked and the first packaged products were introduced. Today the company, which is located in Harahan, LA, a suburb of New Orleans, packages 19 varieties of dry beans, peas and lentils in six different bag sizes ranging from 1 lb to 100 lb and is the biggest packager of red kidney beans in the country. Hayward’s major customers are in the central South, including Texas, Louisiana, Georgia, Arkansas, Alabama, Tennessee and others.

“We had been looking for some new filling machines, and we saw the Model LIMA 250 vertical form/fill/seal machines from UVA Packaging (UVA Packaging, [www.pmb-uvainc.com]) in 2006 at the PACK EXPO show,” says Connelly Hayward, president of Hayward. “We were impressed by their workmanship and adaptability, and the Siemens (Siemens Energy & Automation, Inc. [www.usa.siemens.com]) human/machine interface was a strong selling point because it was so operator friendly.”

In mid-2007, Hayward installed two vf/f/s machines, which run up to 80 bags/min, as part of a new packaging line for its 1-, 2- and 4-lb bags of dry beans. The machines are in place side-by-side in left- and right-hand configurations so that they can be monitored by one operator, and to facilitate bag discharge. A roll of heat-sealable polypropylene laminated film from Printpack, Inc. (www.printpack.com), which is three-color flexographically-printed, is mounted on a pneumatic spindle on the back of the machine and is pulled through the machine by vacuum drawoff belts on the front of the machine. A Markem Smart Date 5 thermal-transfer coder from Markem-Imaje Business Group (www.markem-imaje.com) that is mounted on the back of the machine is integrated into the film carrier and applies a lot code. Then, the film passes over a forming collar on the top of the machine and travels down a forming tube on the front of the unit, where a continuous hot-band sealer produces the vertical overlap seal. A premeasured portion of beans drops intermittently through the film tube as it leaves the vertical forming section.

Next, the film passes through horizontal sealing jaws that move in a box-motion configuration. The cross-seal jaws set moves in against the film tube and induction heat and pressure produce a horizontal top and bottom seal across the film. The jaws move downward with the film for the required time; then move away and reciprocate up to start the next sealing cycle. At the end of each sealing cycle, before the jaws disengage, an air-actuated cutoff knife separates the bags. A photo sensor mounted on the film carriage detects a mark on the film and adjusts the jaw and film motion to compensate for any slight changes to ensure that each bag is in perfect registration.

The machine incorporates all Siemens technology, including a programmable logic controller, a human-machine interface and four Siemens servo drives that operate the left and right film drawoff belts and the horizontal and vertical movements of the seal jaws, respectively (see the accompanying sidebar for more information).

“The LIMAs have done a good job for us,” says Connelly. “Dry beans look like an easy product to fill, but they actually can be very tricky. Different beans have different densities to start with and, being natural products, they can change while they are in storage, so we have to be able to adjust the machines on-the-fly.”

Beans are metered to the f/f/s machine by a volumetric cup filler from Spee-Dee Packaging Machinery, Inc. (www.spee-dee.com) that is mounted above the machine. The beans drop into the filler hopper from the second floor, and then discharge into cups in a rotating turret. As the turret rotates, the open-bottom cups pass over an opening in the bottom plate, and the beans drop down a chute through the metal tube into the film above the sealing jaws. The cup turret is driven by a servo drive from Alpha Gears Drive, Inc. (www.alphagear.com). UVA Packaging mounted the cup filler on the bag machines at its plant and synchronized the controls of the two systems. Any operator adjustments at the bagging machine will reflect in corresponding changes to the filler. UVA Packaging also installed the Markem-Imaje coder and synchronized its operation with the bagging machine including the full integration of the control panel into the LIMA.

As the bags are cut loose by the vf/f/s machine, they drop onto a plate, and a ram pushes them onto a conveyor that carries them through a conditioning unit that was supplied by EDL Packaging (www.edlpackaging.com) that squeezes them to remove air. The ram is integrated with the bag machine, so that each time a bag discharges, the bag machine triggers the ram. The air removal unit consists of a 10-ft-long chamber with two side belts and a top belt that squeeze the bags as they are conveyed through the unit to push the air out of the bags through very small holes in their tops. Each of the two v/f/f/s machines has one of these units, and the conveyors carrying the bags from the units curve around to come together and run in parallel into the shrink-bundling machine from EDL Packaging. The bundler can handle bags from both conveyors simultaneously or either of the conveyors individually. To hold back the bags in case there is a problem with the bundler, there are gates on both conveyors at the point where the conveyors turn to travel to the bundler. Sensors along the conveyors trigger these gates to extend or retract. This entire system was supplied by EDL Packaging.

The bags then travel to the Double Tight Wrap® shrink bundler. This machine, which applies a layer of 1.5–mil, low-density polyethylene film first in one direction and then a second layer of film at 90 deg to the first layer, was wrapping 24-pack bundles of 1-lb bags during PD’s visit. The machine uses two rolls of film mounted above and below the conveyor for the first wrap and two more rolls for the second wrap. The bundler incorporates EDL’s patented technology that bundles the cartons so tightly in low-density polyethylene film that it essentially requires no heat to shrink the film. The heat tunnel is used mainly to shrink the edges of the film.

In this operation, bags enter the bundler single-file and are assembled in lanes—in this case four lanes—at right angle to their entry. Six rows of bags (24 bags) are then released and a pusher moves the bags through the top and bottom film webs, which are pulled over and below the bags. When the bags are through the web, a clamp grips the film to maintain tension, the pusher retracts and the seal jaws close behind the bags to seal the top and bottom films together.

Key to this procedure is the combination of the clamp at the front of the bags and the seal jaws at the back that pull the film very tightly around the bags, which creates EDL’s tight wrap. Each wrapped pack is pushed at a right angle through the second wrapping operation, which works in a similar manner, before the pack is conveyed through the heat tunnel, which fuses the two layers of film to achieve a very strong package.

The bags leaving the bundler are conveyed to a labeling station, where a Little David LS-800DT labeling system from Loveshaw, an ITW Co., Little David Products Div. (www.loveshaw.com) prints and applies pressure-sensitive labels that are printed by a Model M8485Se thermal printer from Sato America, Inc. (www.satoamerica.com). In this process, as each bundle approaches the labeling station, it triggers the printing of the label. After the label is printed, it extends out of the printer in front of an arm that swings out as the bundle of bags passes, picks up the label and applies it to the trailing side of the bundle.