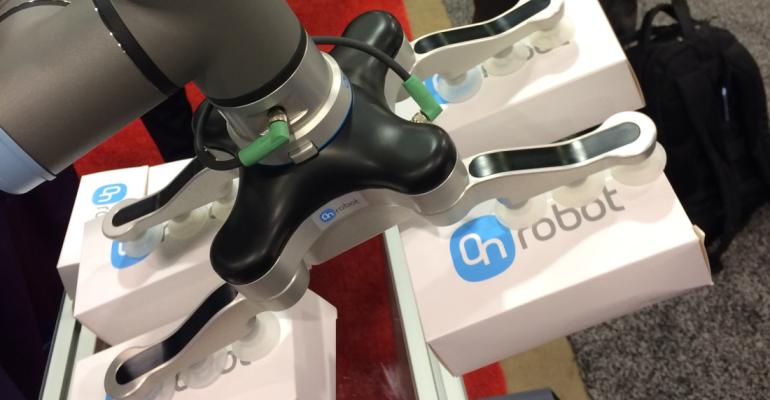 Do you notice what's missing from these cobot suction-cup arms? Where are the air hoses?

New automation technologies that help simplify your packaging operation can save installation time, cut costs and minimize floorspace. Here are three automation trends we saw in action at the recent WestPack show.

1. Self-contained devices are easy to install and use.

Have you noticed electrical cabinets getting smaller? That’s because many devices that used to have centralized power or used to connect to other components are now more self-contained, with integrated features.

Here are three examples I saw at the show:

2: OnRobot’s VG10 vacuum gripper has a built-in pump so there are no hoses to work around. And, as part of the UR+ program, the plug-and-play end-of-arm-tool connects easily to cobots from Universal Robots. The interface is immediate and with no programming. The position of the suction-cup arms can be adjusted by hand yet stay securely in place during operation.

3: The concept of decentralized “power” extends to full packaging machines, too. For example, PDC Intl. is developing a steam tunnel for full-body shrink sleeve labels that has integrated boilers. So even if your facility doesn’t have a boiler, steam for shrinking labels onto containers is still an option you can consider.

Like the tail that wags the dog, peripherals for collaborative robots will move this user-friendly automation forward—especially grippers, which often are the most critical component in a packaging application.

Another new product from OnRobot, the Gecko Gripper was inspired by how gecko lizards can grip and climb smooth surfaces because of adhesive pads on their feet. Also connecting seamlessly with cobots from Universal Robots, the Gecko Gripper uses pressure and motion (adhesion by force) to pick up packages—without an air system.

3. Artificial intelligence (A-I) excels as an engineering aid…or does it?

Marvel fans know how helpful A-I Jarvis is to Iron Man Tony Stark during ideation and product development (at least it was before Jarvis evolved into Vision). Are real-world inventors and engineers as accepting of artificial intelligence in their work?

I had the opportunity to ask one inventive engineer: Lonnie Johnson, CEO of Johnson Battery Technologies. Johnson spoke about “The Power of Perseverance” on Tues., Feb. 5, at Center Stage during the WestPack 2019 event. [During the event, he also received the Lifetime Achievement Award in the 2019 Golden Mousetrap Awards from Design News, a sister publication to Packaging Digest.]

While best known as the inventor of the Super Soaker water gun, Johnson is a bonafide rocket scientist. He has a bachelor’s degree in Mechanical Engineering, a master’s in Nuclear Engineering and an honorary doctorate in Science from Tuskegee University. Johnson served as a Space Nuclear Power Safety Officer in the U.S. Air Force, where he analyzed NASA space systems that used nuclear power sources. During active duty assignments in the Air Force and tours as an employee at the Jet Propulsion Laboratory, he helped develop some of the nation’s most advanced technological achievements including the Galileo mission to Jupiter, the Mars Observer Project, the Cassini Mission to Saturn and the Stealth Bomber (B-2).

Johnson is working to ensure the world has enough energy for a prosperous future. Current projects include ceramic solid-state batteries that can power the Internet of Things; lithium-air batteries that can push electric vehicles to 1,000 miles on a single charge; and the JTEC heat engine, an invention that an energy expert at the National Science Foundation called “possibly the greatest on Earth.”

In his presentation, Johnson talked about A-I’s growth and potential. But when I asked him if he is using or would consider using A-I during one of his projects, he said, “No.” If you’re an engineer, you probably already know why not…figuring out a solution to a problem is what an engineer enjoys doing.

Is this an argument that actual intelligence (also abbreviated A-I!) remains the advantage? I’m ready and willing to debate it!

You’ll find a generous amount of packaging options at PackEx Toronto 2019, June 4-6, from robotics to semi-automatic equipment and fresh ideas in containers and design. Plus join in free education at Centre Stage. For more information, visit PackEx Toronto.