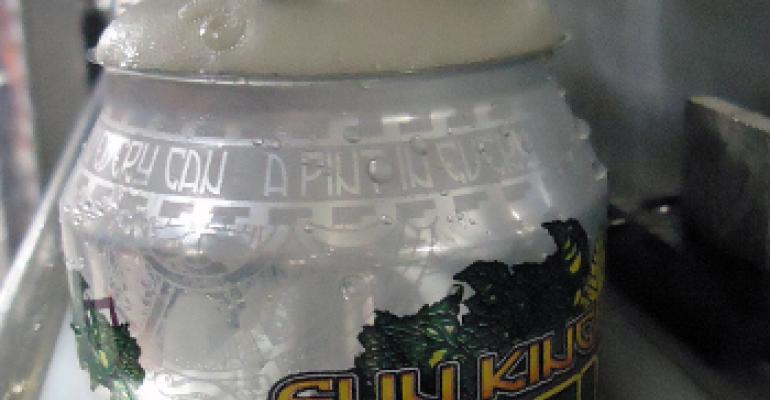 The beer injection system has two nozzles side-by-side at each station—one large and one small diameter. Most of the beer enters through the larger tube, but beer injected through the narrower tube creates foam that forms a “cap” on top

Founded in 2009, Sun King Brewing Co., Indianapolis, IN, produced 5,000 barrels of beer in its first full year of operation, doubled that in 2011 and brewed more than 15,000 barrels last year. The company, which was started by veteran brewers Dave Colt and Clay Robinson, specializes in handcrafted seasonal and specialty beers that it distributes exclusively in Indiana. And that is where it intends to maintain its focus.

"We have no plans to expand our distribution to other states," says Robinson. "We are going to spend $3.9 million on new equipment and add 1,850 square feet to our existing 27,000-square-foot facility; and we still won't be able to meet demand in Indiana." The expanded brewery will house 240-barrel fermentation tanks to allow for the increase in beer production. 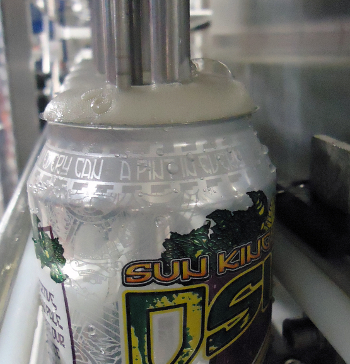 One thing you won't see at Sun King is bottles. "Dave and I both had can collections growing up, and we knew that the only thing that we would fill beer into was cans," says Robinson. "Cans protect beer from two of its greatest enemies-light and oxygen-in a way that no bottle can. They are lighter so they take less fuel to ship to and from our facility. Cans take less energy to recycle than glass, and they are infinitely recyclable, plus every beverage can in the U.S. contains over 60 percent recycled material, so cans are all around better for the beer and better for the environment."

Packaging Digest's plant tour started in Sun King's tasting room, where an ever-changing selection of the brews are on tap. The first surprise was the number of visitors in the room. It was early afternoon, and the place was crowded. "This is nothing," says Robinson. "We'll have 1,000 people visit us on a Friday evening."

The second surprise was the number of people coming in with empty 2-qt growlers. A growler is a glass container that the brewery fills with draft beer for the customer to take home. Most of the people were bringing in more than one growler, and one person had six on a small cart.

"People have to clean the growlers themselves; we don't do that," says Robinson. "We fill them with the beer that they select and apply caps. The growler is reusable so it cuts down on packaging cost and materials. Therefore, they are more cost effective and better for the environment."

To keep up with increasing demand, Sun King installed a canning line supplied by Cask Brewing Systems Inc. that runs about 30 cans/min. "This canning equipment only became available in a price range that is affordable to craft brewers about 10 years ago, so more brewers are taking advantage of the opportunity to can their products," says Robinson.

The depalletizer raises the pallet one layer at a time, and an arm sweeps the top layer of cans off of the pallet onto a converging conveyor. From there on downstream, all the equipment was supplied by Cask. The cans travel downward through a twisting pre-rinser where food grade sanitizer is sprayed into them. The drained cans exit the pre-rinser in an upright position onto a conveyor that delivers them to the filler.

"An essential requirement at Sun King is to minimize air content in the finished product," says Robinson. "With a residual oxygen content of 15 to 20 ppb (parts per billion), our beer has some of the lowest air pickup in the industry."

As a first step in achieving this, Sun King uses pressurized carbon dioxide to push the beer from the bright tank to the filler, which is equipped with 10 sets of nozzles. The first five inject carbon dioxide to displace oxygen from the cans, and the second five inject the beer. The beer injection system has two nozzles side-by-side at each station-one large and one small diameter. Most of the beer enters through the larger tube, but beer injected through the narrower tube creates foam that forms a "cap" on top of the beer to keep out air.

A gate holds the cans as the carbon dioxide injection and filling steps take place, after which five filled cans are released, and the process is repeated.

The cans then enter the capping system. Can lids, which are supplied by Ball Corp., travel down a carbon dioxide filled chute and are picked up by cans passing beneath the dispensing shoe. The cans then pass beneath a roller that presses the lid down into place, after which a horizontal piston pushes one can at a time into the seamer.

Seaming is a typical operation. The can is raised against the spinning seaming head, and a hook comes in and folds the top seam of the can over the lid. A second hook then comes in and finishes curling the lid and can together.

Because of the residual beer on the cans after seaming, they continue through a rinsing section followed by air nozzles that dry the cans. They then travel to an automated station that applies plastic carrying handles from PakTech to four cans at a time.

Controls for the system were supplied by Omron Electronics LLC.

To run the Alumi-Tec cans, Sun King installed a semi-automatic system that runs 6 to 8 cans/min. Robinson says, "The small, highly efficient, manual filling line allows us to package our most rare, small batch beers in an aluminum package."

The filler, which runs two cans simultaneously, is equipped with a purge station and a filling station. A worker manually places two cans beneath the purge nozzles and pushes the start button, which introduces carbon dioxide into the cans. The worker then places the two purged cans beneath the filling nozzles, and pushes the start button to fill the beer. Each step is separate. The length of the carbon dioxide purge and the quantity of beer to be filled is set by the operator; the system repeats those quantities each time a button is pushed.

A single-head semi-automatic Series 501 capper from Closure Systems Intl. seals the containers. A worker places a closure supplied by Silgan White Cap on the filled can, positions it in the unit, and then pushes the start button to initiate the operation. A plunger descends to keep the bottle from rotating during the procedure. Two rollers then come in and travel around the cap to form the cap onto the threads of the can. These are followed by two more rollers that create the tamper-evident band on the cap.

At the end of the procedure, the worker removes the capped bottle and repeats the process. A trained operator can run about 50 bottles/hr on the unit. The unit uses a control system from Triangle Research Intl. Inc. and an HMI from Kessler-Eller Products.

In another move into essentially new territory, Sun King placed a small portion of its Johan the Barleywine beer into bourbon barrels to age. This process imparts even more depth of character to the beer, allowing it to pick up flavor from the bourbon as well as the oak. Sun King produced only 250 Alumi-Tec cans of Bourbon Barrel Johan, which sold for $25.00 per can with a limit of one per person.

These are exciting times for Sun King Brewing Co. With its $3.9 million expansion and its commitment to new types of packaging and beers, the company is well positioned to maintain its position in the forefront of the country's craft brewers.