From a humble start nearly 30 years ago as a one-product company, Golden Boy Foods, Inc., Burnaby, BC, now has a repertoire of more than 200 products today. Of these products, peanut butter continues to be its core business as the largest private labeler of peanut butter in Western Canada. It also is a major importer and distributor of nuts, including peanuts, walnuts, pecans and almonds and many others as well as dried fruit, trail mixes and other dried food products. Golden Boy says that when it was able to provide a four-hour turnaround on an emergency delivery of an order, it knew it had met expectations of service. 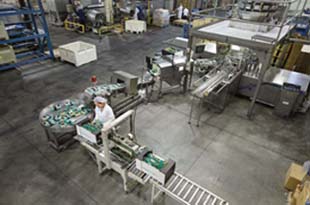 The x-ray inspection unit and a metal detector are teamed on one pouching line, just ahead of the case-packing station.

With worldwide networks of suppliers, Golden Boy says it takes no shortcuts on quality. Its quality-control department monitors the products at every stage of the production process.

“Our reputation hinges on the quality of our products, and we take that premise very seriously,” Golden Boy Foods states on its Website. The company produces, packs and ships its products within days of an initial order placement. It offers customers the flexibility of packaging its products in nearly any pack size its customers require.

But importing a number of ingredients from many countries has its challenges, and Golden Boy knows that incoming foods need to be carefully screened for contaminated material and scrutinized for problems that can come up from harvesting and the shipping processes.

Golden Boy relates that in some of the less-developed regions of the world, harvesting, cleaning and packing standards are not as high as they are in Canada and the U.S. That means the packer must shoulder these burdens and assure that any contaminants don't go to market with its products.

Thus, to maintain its leading role in the marketplace, Golden Boy continuously invests in customer and consumer research and product-development and packaging innovations. Recently, it installed two EZx™ x-ray-based contamination-detection systems and two additional APEX™ 500 metal-detection systems—all from Thermo Fisher Scientific (www.thermo.com). Replacing some of its older Thermo Scientific metal detectors to achieve optimum sensitivity, the APEX acquisitions bring Golden Boy's total count of metal detectors (most of which are PC S3 systems) to 20. The systems are used for a number of automated inspection applications on lines that pack roasted nuts, trail mixes and dried fruit such as raisins. With an aperture size of 14 in., the EZx x-ray systems are additions to two lines that pack roasted nuts and trail mixes in 250- to 300-g standup pouches made of conventional and metallized films. 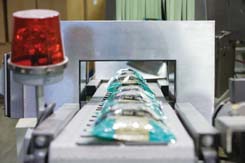 It is on these two packaging lines in particular that Golden Boy has made a rather cutting-edge move by teaming both x-ray inspection and metal detection equipment together, to meet the rigorous standards it sets for contaminant detection. This combination approach is used for products in which the probability of rock fragments or other nonmetal objects is greater than on other packaging lines, explains plant manager Larry Toth. “We get that much more insurance that customers aren't receiving any foreign material in their packaging.” The rest of the packaging lines, which include those filling and sealing corrugated shipping cases of dried fruit such as raisins and other foods, are equipped with the metal detectors only.

“The Golden Boy application is quite unique,” echoes Bob Ries, product manager for metal detection and x-ray inspection at Thermo Fisher Scientific. “Nuts and trail mix-type products first pass through one of our x-ray machines, which detects things like rock fragments and larger-sized metal objects,” he says. “Then, Golden Boy passes the products through our metal detector to find things like wire and staples, which are much smaller in size or cross section/diameter. Typically, the x-ray systems find metal as small as one millimeter in size. Anything smaller than that won't generate a sufficient image resolution. A metal detector, however, finds very small-diameter metal objects because those objects are conductive.”

Golden Boy's Toth says that when his company runs metallized pouches on these “combination lines,” it desensitizes or lowers the sensitivity on the metal detector at that time, so that the packages don't sound off any alarms. “On every other product and package that runs on those lines, we operate both the metal detector and x-ray systems simultaneously because there are contaminants that may pass through the x-ray system that won't get through the metal detectors and vice-versa,” he tells PD. “So we now have the best of both worlds.”

Golden Boy's APEX 500 metal detectors, each with an aperture size of 14 in., assist in ensuring that all types of metal, including common stainless steel, are detected before the product packaging is shipped, and to protect expensive downstream production equipment.

The APEX uses what Thermo Fisher Scientific calls a “multi-coil” design (patent pending) that increases the effect of the magnetic field in the system's aperture by more than 1.5 times. This, it says, enables the detector to target and amplify signals from very small pieces of metal and improves signal levels resulting in a higher level of detection capability. A new shielding technique can also reduces unwanted effects from hard-to-handle, wet or conductive foods. The newest system also has an icon-driven, touchscreen interface and can track metal that's 20 percent smaller in diameter than previous APEX generations, according to Thermo Fisher Scientific. Equipped with digital signal-processing software, the APEX 500 was quick to install, says Toth, and features integrated electronics, with no external boxes to mount or wire, and a built-in Quality Assurance Test (QAT) that allows users to validate performance.

Working with larger package configurations, when the metal finds contamination, it sounds an audible alarm and a warning light flashes so that an operator at the end of the line can retrieve the metal-containing package. 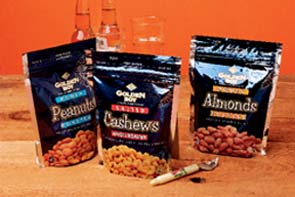 “We have actually found metal inside the shell of a peanut,” Toth recalls. “The APEX system is quite remarkable. It's very sensitive. We use it to detect metal contaminants in large corrugated shipping cases, on lines that run raisins in and mixed nuts in thirty-pound quantities. On the raisin line, the APEX is finding stainless steel and other metal contaminants as small as one millimeter.”

On the packaging lines, such as those running standup pouches of nuts and trail mix, the two combination detection/inspection systems are positioned one after the other, with the x-ray system first and the metal detector second, just after the outfeed conveyors of the standup pouching/gas-flushing equipment from those including but not limited to Kliklok-Woodman (www.kliklok.com), Hayssen (www.hayssen.com), Triangle (www.trianglepackage.com), and before pouch accumulation (that takes place on a turntable) and manual case-packing and tape-sealing. 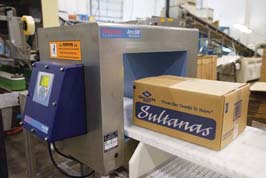 One of the new metal detectors in action, inspects cases of Golden Boy’s Sultana raisins. The system tracks the tiniest of metal contaminants.

Toth says the plant likes the new x-ray system for its compact size. “We really wanted something small,” he says. “I believe the EZx system is half the size of some of the older systems we have. It has a small footprint of about two feet wide by six feet long by four-and-a-half feet tall, which is very portable—especially important because space is limited. We run the ingredients through a laser sorter first and then send it through the x-ray system and/or metal detector.”

The x-ray beam shoots vertically, from the ground-up, which Thermo Fisher Scientific's Ries says is the optimal way to x-ray a pouch that lays flat on a conveyor, such as these. With an aperture approximately 14 in. in size, the EZx is also easily programmable and expands storage capabilities to up to 500 product programs—important factors, given the variety of ingredients in Golden Boy's product mixes. The metal detector must be able to differentiate between clumps of raisins, nuts and foreign material. The software helps to track down foreign and potentially harmful materials in its most complex mixes, Toth adds.

Especially attractive is the x-ray's ability to work with metallized film packaging, which Golden Boy uses in the form of attractively printed 300-g roasted nut pouches.

Golden Boy is also able to access data, images and programs, and log files over a secure Ethernet connection. The EZx image-analysis software helps optimize sensitivity and probability of detection while creating and saving detailed records for traceability and process improvement. Once the system is running, a display shows an intuitive red light/green light status monitor along with simple summary statistics. Warning lights alert line operators when the x-rays are turned on. Both the x-ray and metal detector systems can output signals to reject a package using a reject gate that drops the package into a rejection bin before it's passed through the system again while setting off lights, alarms or buzzers. 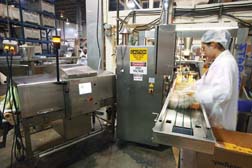 With 27 packaging lines running a total of 6,800 stockkeeping units, the Burnaby plant produces 30 to 35 SKUs that run on the lines equipped with the x-ray systems.Golden Boy stays busy, so Toth says he needs flexible, versatile equipment that can easily operate at lines speeds of 40 pouches/min on larger package sizes (2 kg) to 60 ppm on the smaller standup pouch sizes (250 g). The lines equipped with the new metal detectors only run about eight 30-lb cases/min. “We have other types of x-ray systems here at the plant for other applications, but the EZx was so quick to install and easy to use,”Toth says. “We could have probably installed them and had them running without the assistance. You pass eight or ten packages through the system during setup mode, then pass a package through that has contaminant samples in it, the system detects the contaminants and you're done. It's very user friendly and easy to program.”

Golden Boy is not only pleased with the new systems, it's “nuts” about them. “We have already seen a return on our equipment investment and get virtually zero complaints about contaminants,” Toth sums up. “We're very pleased. Combining metal detection with x-ray checks for all sorts of different things. We now have the best control we can get.”