A new case packer at Super-Pufft Snacks, Mississauga, ON, is having a noteworthy impact on its bagging operation. Super-Pufft Snacks, which has a 160,000-sq-ft state-of-the-art plant outside of Toronto, produces a variety of snacks under both its own name and store brands for many of North America's largest companies, including Wal-Mart, Aldi and Sobeys. 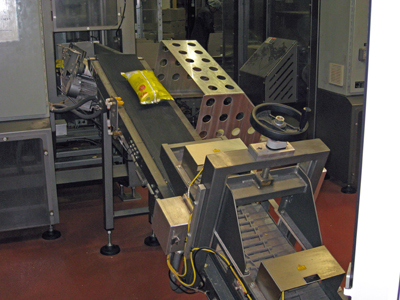 packing products by hand, but this presented a number of disadvantages. Yousif Al-Ali, owner and general manager, says, "We were hand packing from an accumulation table, which is very labor intensive, and it was awkward to fit the personnel required to perform the hand packing operation.

"Super-Pufft is a private-label manufacturer, so it is necessary to keep up with production and order demand from various customers. We needed flexibility to pack various products of different sizes and in different patterns."

Super-Pufft worked initially with flexi-PACK Machinery Solutions Inc., BluePrint's exclusive sales agent in Ontario, to determine how its needs could be met. Flexi-PACK determined the exact specifications of the project and has been an intermediary between Super-Pufft and BluePrint since the project's inception.

Al-Ali says, "BluePrint is a leader in the snack food industry, and we needed a system that was going to be successful for us to gain the labor savings we required. BluePrint had numerous machines at other snack food manufacturers with great success."

nd are conveyed to the case packer. As they travel up the packer's infeed conveyor, they pass through BluePrint's Seal Check system, which identifies leaky bags by applying top pressure on the bag. The system uses a laser to measure the displacement of the compression device, which coordinates with the thickness of the bag as it travels through the device.

It compares that thickness of the compressed bag against a minimum value and looks for a deviation between thickness readings at two points, indicting a leak.

As long as there is sufficient air in the bag to be measured, Seal Check will detect leaks ranging in size from minute holes that hand packers may not notice up to gross leakers that are easy to spot. Bags with leaks are rejected from the conveyor before they enter the case packer.

The bags continue onto the indexing Smart Trak, which collates layers

of bags for packing. This system consists of two conveyors containing pockets, one behind the other. One bag is placed in each pocket in the front conveyor until it is filled, at which point it travels to the pickup zone. When it leaves, the second conveyor moves up to take its place and is loaded.

In the pickup zone, BluePrint's robotic High-Flow Pick Head picks up the bags on the conveyor and places them horizontally in an intermediate cassette. When the bags have been removed from the conveyor, it travels over a head pulley and returns back to a position behind the conveyor being loaded, and the procedure is repeated. The Smart Trak typically does not transport a full caseload of bags on a single conveyor, so it will go through several iterations to fill a case.

The High-Flow Head is designed to use a single vacuum source to pick up all of the bags on the conveyor as opposed to individual vacuum cups. The unique head design enables it to handle different bag counts without requiring change parts.

In addition, it can handle varying pick counts. Thus, if a customer needed 11 bags in a case, it would pick up four bags and place them in the cassette, pick up four more bags and place them in the cassette and then pick up three bags to complete the 11 count. Even though the fourth bag is not present, the head still has enough power to pick up the three count. 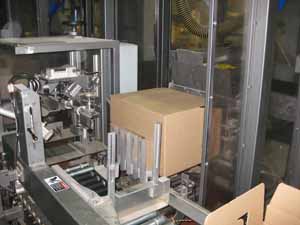 ing feature of the High-Flow Pick Head is that the one vacuum head handles all sizes of bags that Super-Pufft runs, so no additional heads are required. This results in savings on change part and greatly reduces changeover time. This is significant for Super-Pufft, because it runs more than 100 SKUS and up to 10 different bag sizes and case-pack patterns on the line.

Al-Ali says, "This can be a considerable savings, because it is not unheard of for a set of change parts to cost as much as $20,000. More important than the up-front capital expenditure, though, is the lifetime savings associated with preventative maintenance, downtime due to component failure and lost time from more complicated changeovers.

ver time with the Model VPP is less than five minutes without tools, and most changeovers are accomplished in seconds, with a simple touch of a button on the color HMI screen," Al-Ali says.

Bags are then loaded into corrugated cases that have been erected on a separate machine. Each case is conveyed to the loading zone, where it is tipped on its side against the filled cassette so the open top is aligned for loading. All four top flaps are straight up at this point.

A ram pushes the entire matrix of product into the awaiting tipped case. The case is then tipped back down, and the full case is ejected from the load zone. The bags are aligned vertically in the case.

It then enters the BluePrint Top Flap Fold Closer, which eliminates the need for tape or adhesive. The closing operation, which uses a series of pneumatic operations, essentially mimics the way a person would close the flaps. The front major flap is folded over the top, followed by the end flaps. Both of the end flaps have cutouts on the edges facing the back major flap, which is folded and tucked into these cutouts so the end flaps hold it in place.
These cases are intended to be opened and closed in the store, so there is a second fold running longitudinally on the back major flap to facilitate retucking it at the store.

Al-Ali says, "This feature is very important as it eliminates 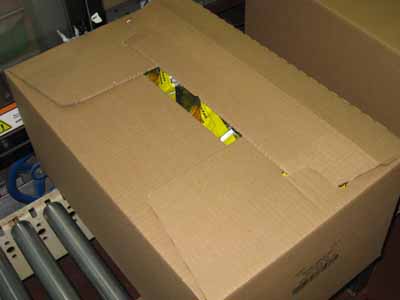 the need to have a top closing machine, such as a taper, external to the machine after the chips have been packed. On the BluePrint machine, the flap fold top is completed inside the machine before the case is discharged from the machine. It also saves on consumables, such as tape or glue, to close the top of the case."

The cases then discharge from the case packer and are transported to the palletizing operation.