Unveiled at Interpack, the Packer demonstrated a highly-dynamic motion control application where individual axes, cam profiles and robotics must 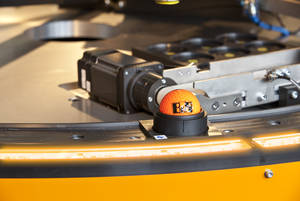 be synchronized with the utmost precision. Designed solely for demonstration purposes by B&R Ind. Automation Corp., the Packer was developed, built and programmed specifically to showcase B&R technology. Integrated into the machine are the absolute latest machine concepts for handling, image processing, safety technology, control and monitoring.

Three different robots - an articulated arm robot, a tripod robot and a Cartesian coordinate robot - with completely different kinematic characteristics, are synchronized along a rotary table to pick up and package golf balls transported along the table's perimeter. The complete system, which includes 15 axes as well as the process control and visualization, is operated using a single CPU, in this case an industrial PC.

The different kinematics exhibited by the three robots are also seamlessly integrated into the controller, with the open interface making it possible to implement any type of customer-specific kinematics. With its flexible interpreter, standard commands can be used to program different sequences or user-defined comm 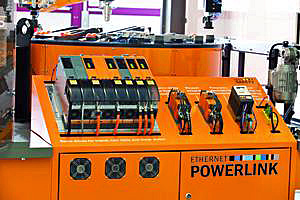 ands can be created that are more relevant to the process at hand. This is one way to drastically reduce the time needed to create the sequence program for the handling system.

Deterministic real-time communication with ultrafast POWERLINK
The various mechatronic modules and stations used on the Packer are connected on a single POWERLINK communication line, which also allows optional machine modules to be added or removed during operation. When this occurs, the new configuration is automatically detected on the network, with the necessary software enabled or disabled as needed.

The axis drives controlling the handling robots are completely integrated into the comprehensive motion concept in use throughout the machine. Process and handling drives can also be operated in a compact, cost-saving module directly next to one another.

The setpoint for the handling axes is specified in the central machine controller using Generic Motion Control. This is also where both the robot data and the process data are processed using a shared database - completely transparently and fully synchronized. This completely does away with bottlenecks between the machine and the robots that used to exist with bus couplings in traditional solutions.

Transparent data storage makes it possible to add new machine functions that were previously impossible to implement due to communication delays caused by the bus transfer cycle. This allows the handling procedures to be optimized to the processing task at hand, thereby further increasing machine throughput and overall availability. Having to pay for a separate robot controller, a separate robot control cabinet and an interface for communication has become a thing of the past.

The fastest response times and maximum productivity with openSAFETY
Visitors could interact directly with the machine via an entry point equipped with a light curtain. Once an approaching operator was reported to the machine by the light curtain, the machine immediately reverted to an operating mode with a safe speed. Direct, decentralized POWERLINK communication, which connects all of the safety components to the centralized SafeLOGIC controller via the openSAFETY protocol, ensured an immediate response from the machine.

Over 20 different safe motion control functions were available that cou be used to implement safe drive applications. They were helpful in speeding up the setup process for the safe operation of robots as much as possible. One of these, Safely Limited Speed at the Tool Center Point, was demonstrated by the Packer. Here, the positioning data of each robot axis was transferred to the SafeLOGIC controller. The current speed of the robot gripper was calculated in the safety application based on the robot kinematics in use.

Unlike safely limiting the speed of each individual robot axis, the constant exploitation of the maximum permissible speed at the tool center point resulted in a speed advantage that substantially increased productivity during the time-intensive setup process. The fastest safety-oriented response speed in the world -provided by the combination of openSAFETY and POWERLINK - reduced the braking distance of an axis up to 100 times when a safety function is violated compared to traditional systems.

These faster response times allow the machine manufacturer to considerably reduce the clearance needed for the process in the machine's enclosure, which simplifies operation of the machine by the end user while increasing productivity at the same time.

When visitors added "bogus balls" to the Packer, their different color was detected 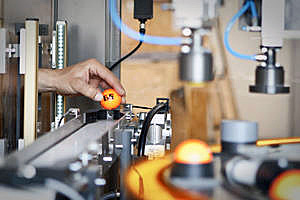 High-speed cycle times in the microsecond range as well as precision determinism well below 1 μs allowed the image processing results to be reliably assigned to the respective product. In addition, the synchronous connection between the image analysis and the process significantly increased productivity, especially in high-performance machines.