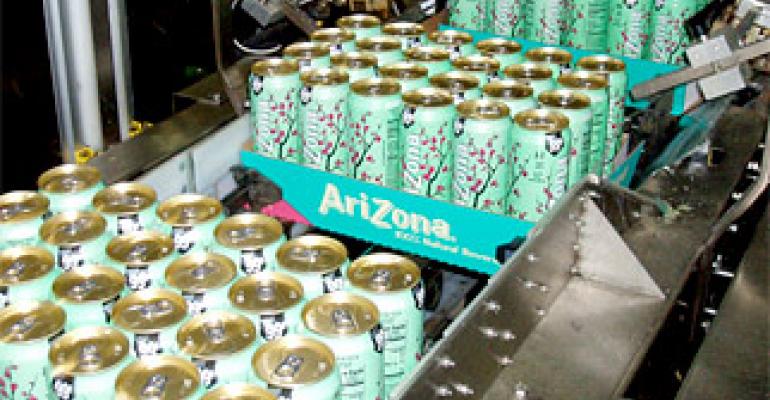 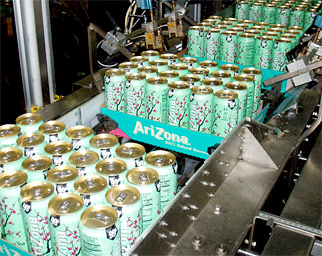 While packaging processes have always played an integral role in corporate decision making, food and beverage manufacturers are finding themselves under heightened pressure to capture market share in an increasingly cutthroat retail industry.

One company that has realized the direct bottom line benefits of efficient packaging equipment is AriZona Beverage Co., a major producer and distributor of beverages and snacks based in Lake Success, N.Y.

Thanks to a great brand and innovative packaging, Arizona has expanded rapidly over the last decade, with an unprecedented 40 percent growth rate over the last two years. This exceptionally high growth can be attributed, in part, to the company’s innovative use of packaging equipment.

Prior to purchasing the Standard-Knapp tray packer, AriZona relied on co-packers to keep up with increasing demand, but in August 2003, the company purchased its own 200,000-square-foot production facility in Maplewood, N.J. In operation round-the-clock, the plant produces many different types of beverages, routinely running four or five flavors—often requiring package changes—in the same day.

Like many top executives in the food and beverage industry, Lotito is always in search of innovative technologies that can help to further streamline his company's production process and increase productivity.

Lotito and his director of operations, Mike Putnam, visited PACK EXPO Las Vegas to find a tray packer for their Maplewood plant. They were looking for equipment that would help them increase production speed and provide reliable, flexible performance. Topping their criteria list was a system offering efficient changeover capability. Changeover processes on the company’s existing tray packer were cumbersome, creating too much downtime in the production process.

While walking the show, Lotito researched a variety of different tray packers on the market, interviewing technical experts about their capabilities, and benchmarking their performance. After observing the different machinery and speaking to company representatives, Lotito selected Standard-Knapp’s Continuum 296T Tray Packer.

A Soft Touch
Though AriZona wanted to streamline production, the company also needed to protect its graphics-heavy labels during the packaging process. The Continuum Tray Packer stood out from its competitors because it can accommodate trays with high walls—up to 4.5 inches—while most other machines use trays with only 2 or 2.75 inch walls. The higher tray walls provide a shield for AriZona's distinctive bottles and cans.

In addition, the tray packer's infeed and lane division technology ensures that AriZona’s products move in even lanes, without jamming. Its "Zero-Gap" infeed design smoothly divides products from mass flow into individual lanes utilizing geometry and frictionless rollers. This eliminates the need to break up bottlenecks with oscillators, which could damage sensitive beverage labels. After products are fed into the packer, a servo-driven grouper precisely meters them into the desired amount. With smoother production, plant operators can spend less time tending to jams and can be more attentive to overall efficiency.

Change Is Easy
Since AriZona's Maplewood plant produces beverages in many different sizes and packaging configurations, they need to make frequent changeovers to their equipment. Before using the Standard-Knapp Tray Packer, production slowed considerably whenever adjustments needed to be made, particularly to the tray packer.

"With the older equipment, it was typical to have a half hour or one-hour period where you’re tweaking things to maximize efficiency," Lotito explains. "Plants in general are trying to get away from that tweaking, because you just can’t afford that."

With the help of the 296T, AriZona has reduced changeover time by 50 percent. Color-coded parts, numbered change points, and a user-friendly process mean that changeovers for packs of 12, 14, 18, and 24 bottles or cans take only about half an hour. Since they do not require tools, the changeovers can be done by operators, rather than mechanics—an efficient and cost-effective use of manpower. To make a changeover, operators follow a step-by-step process to ensure that changes are made correctly the first time.

The Freedom to Grow
The Maplewood site is gaining a reputation within AriZona as a high-performance test plant; when the company decides to come out with a new product, the Maplewood production line will be flexible enough to run it.

"At AriZona, we strive to create products that look as good as they taste. To do that, we have to keep trying new things," Lotito says. "We need equipment that can keep up with our ideas, and Standard-Knapp is helping us to do that."