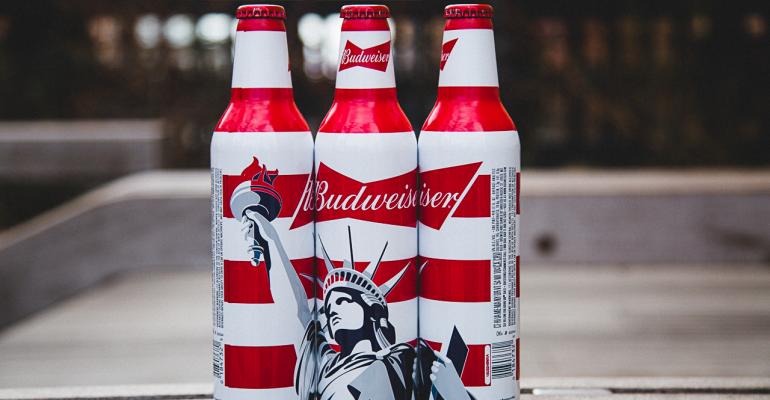 In summers gone by, Anheuser-Busch has added a patriotic touch to the Budweiser packaging design with graphics rich in stars and stripes. This year, the brand owner took a new direction: Budweiser’s summer 2015 package graphics highlight the Statue of Liberty.

The patriotic limited-edition beverage packaging is decorated with a stylized illustration of Lady Liberty printed in blue and grey, holding her torch aloft on a ground of red and white stripes.

Package formats include a 16-oz. aluminum bottle as well as 8-, 12-, 16- and 25-oz. cans. Bottles, cans and paperboard multipack carriers all sport the Lady Liberty graphics. The packaging rolled out nationwide starting in April.

To appeal to drinking-age Millennials, Anheuser-Busch publicized the patriotic Budweiser packaging using photos taken by Instagram luminary 13thwitness. His photographs show the aluminum bottle in various New York tableaux, some featuring landmarks like the Brooklyn Bridge and the Statue of Liberty.

As part of its “Monument Series” of performances held in iconic American places, Anheuser-Busch also sponsored a concert on New York City’s Liberty Island on June 21. The concert, featuring Mary J. Blige, included literal pyrotechnics: A fireworks show in the skies above the Statue of Liberty capped the evening.