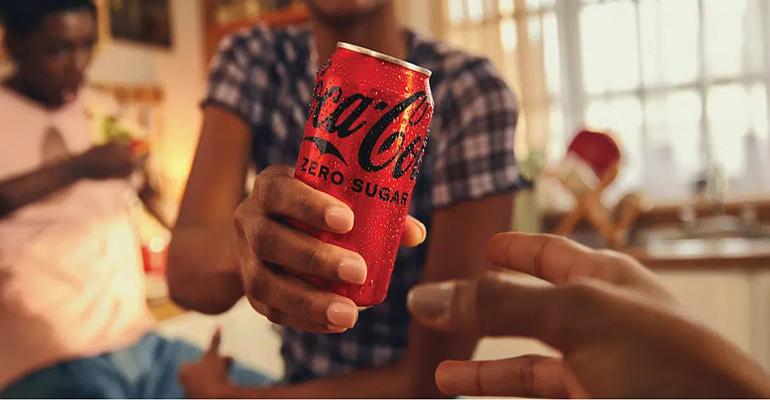 The launch of a new and improved Coca-Cola Zero Sugar recipe in the US is coordinated with a simplified new packaging design.
The global beverage brand reports ongoing rollout of recycled content bottles, redesigned Coke Zero, ocean cleanup, the brand’s first NFTs, and more.

“Our results in the second quarter show how our business is rebounding faster than the overall economic recovery, led by our accelerated transformation,” says company Chairman and CEO James Quincey. “As a result, we are encouraged and, despite the asynchronous nature of the recovery, we are raising our full year guidance. We are executing against our growth plans and our system is aligned. We are better equipped than ever to win in this growing, vibrant industry and to accelerate value creation for our stakeholders.”

The following packaging-related news was reported:

The launch of a new and improved Coca-Cola Zero Sugar recipe in the United States brings it closer to the great taste of original Coca-Cola. That’s paired with a new, simplified packaging design that “celebrates the iconic Coca-Cola logo, beginning with the brand’s universally recognized red.” The Coca-Cola logo in black Spencerian script signals the Zero Sugar variety.

The company continued its sustainability journey during the second quarter, which included announcing plans to use 100% recycled plastic (rPET) in all on-the-go bottles across its portfolio in Great Britain beginning in September. By the end of summer all locally manufactured packages in Belgium and Luxembourg are expected to be 100% rPET.  These initiatives will save approximately 43,000 tonnes/47,400 tons of virgin plastic each year.

Guided by our purpose to refresh the world and make a difference, we remain focused on our #ESG journey and accelerating sustainable business practices.

The company reports the continued acceleration of the “Wabi” ecosystem that is now present in 14 countries. What’s so cool about Wabi? According to a July 27 report from Consumer Goods Technology (CGT), “in use for more than two years, Wabi is a set of features in a digital ecosystem that enables the No. 12 consumer [packaged] goods (CPG)  company [Coca-Cola] to sell beverage and multi-category orders both direct-to-consumer and B2B. The company is predominantly using Wabi in partnership with its bottlers in the B2B space, but it’s also experimenting with it in B2C [business-to-consumer].”

Brands large and small are leveraging B2C aka direct-to-consumer (DTC) sales, which is a major driver supporting the overall explosion in ecommerce growth, with online sales accounting for 6.6% of all CPG sales, according to Shopify. DTC accounts for 40% of that 6.6%.

In Japan, the company’s direct-to-consumer Coke ON app, which connects consumers to the system’s vending machines, reached more than 28 million downloads with significant gains in consumer awareness versus the prior year.

Notably, The Coca-Cola Company reports that “in Europe, our ecommerce is growing retail value faster than 50% across key markets, resulting in a strong value share gain year-to-date.”

The company remains keenly sensitive to emerging trends; it announced July 28 participation in the developing market for Non-Frangible Tokens, better known as NFTs. In short, NFT means that the token or item is guaranteed unique and can’t be replaced with something else.

Introducing the first-ever Coca-Cola NFTs! To celebrate International Friendship Day, we’ll be donating all proceeds to our longtime friend and partner @SpecialOlympics. Check them out on @opensea. #NFTCommunity #OpenSeaNFThttps://t.co/SIJ0HnNfdu pic.twitter.com/Rusj2UJuE6