Designed for wine, the Frugal Bottle paper bottle is applicable to other beverages and has a spin-off, the Frugal Cup.

Paper bottles seem to be the “it” format in 2020, with major brands like Absolut, Diageo, Carlsberg, Coca-Cola Co., and PepsiCo developing them via collaborative projects including Pulpex and Paboco (see “Are Paper Bottles Sustainable and Practical?” published October 2020).

Another notable entrant in the paper bottle chase is Frugalpac’s Frugal Bottle, which was introduced in June. The 750-mL Frugal Bottle is made of 94% recycled paperboard with a inner food-grade pouch to hold the wine or spirit. The pouch is a polyethylene/metallized polyester laminate, the same material used in bag-in-box wines. The first wine to launch in the format is 3Q, an unwooded Sangiovese red with a hint of Merlot and Cabernet from the award-winning Italian vineyard Cantina Goccia.

Since then, the company has been inundated with more than 700 quality enquiries from brands, bottlers, and retailers around the world, according to Malcolm Waugh, Frugalpac CEO.

Here’s more Frugal Bottle fascinating facts from our interview with Waugh, starting with several callouts why the package is claimed as a sustainably better choice than glass or plastic bottles…

1. It’s lighter. The Frugal Bottle weighs just 83 grams so is up to five times lighter than a standard glass bottle, making it easier to carry and less costly to ship.

2. It uses less plastic. Made using only 15 grams of plastic for the inner pouch, the Frugal Bottle uses up to 77% less plastic than a PET or rPET bottle, which weighs 64 grams.

3. It’s better for the environment. An independent Life Cycle Analysis by Intertek found the Frugal Bottle, which is made from chemical-free recycled paperboard, has a carbon footprint up to six times (84%) lower than a glass bottle and more than a third less than a bottle made from 100% recycled plastic. The Frugal Bottle’s water-production footprint is also at least four times lower than glass.

4. It stands out. Made from recycled paperboard, the Frugal Bottle allows for 360-degree branding around the bottle and has a printed base. Because no other wine or spirits bottle looks or feels like it, it stands out whether on shelf or table.

5. It’s better for wine producers. The Frugal Bottle can be produced within a customer’s bottling facility, offers complete design and print freedom, and is more cost effective to transport while reducing the customer’s carbon footprint.

6. The company is striving to make the Frugal Bottle more sustainable. “The recycled content in the Frugal Bottle is currently 80%, which is better than most glass bottles, but we are keen to increase that figure.”

7. The inner pouch could be recycled, but that is not yet happening. “As with most laminated pouches used in the drinks industry it is not easily recycled in UK waste streams and usually is incinerated. However, in some European countries it could be recycled with mixed plastics. Once testing is complete, Frugalpac will switch to a pouch made from mono-metallized polypropylene that can be recycled in the UK and other markets.” 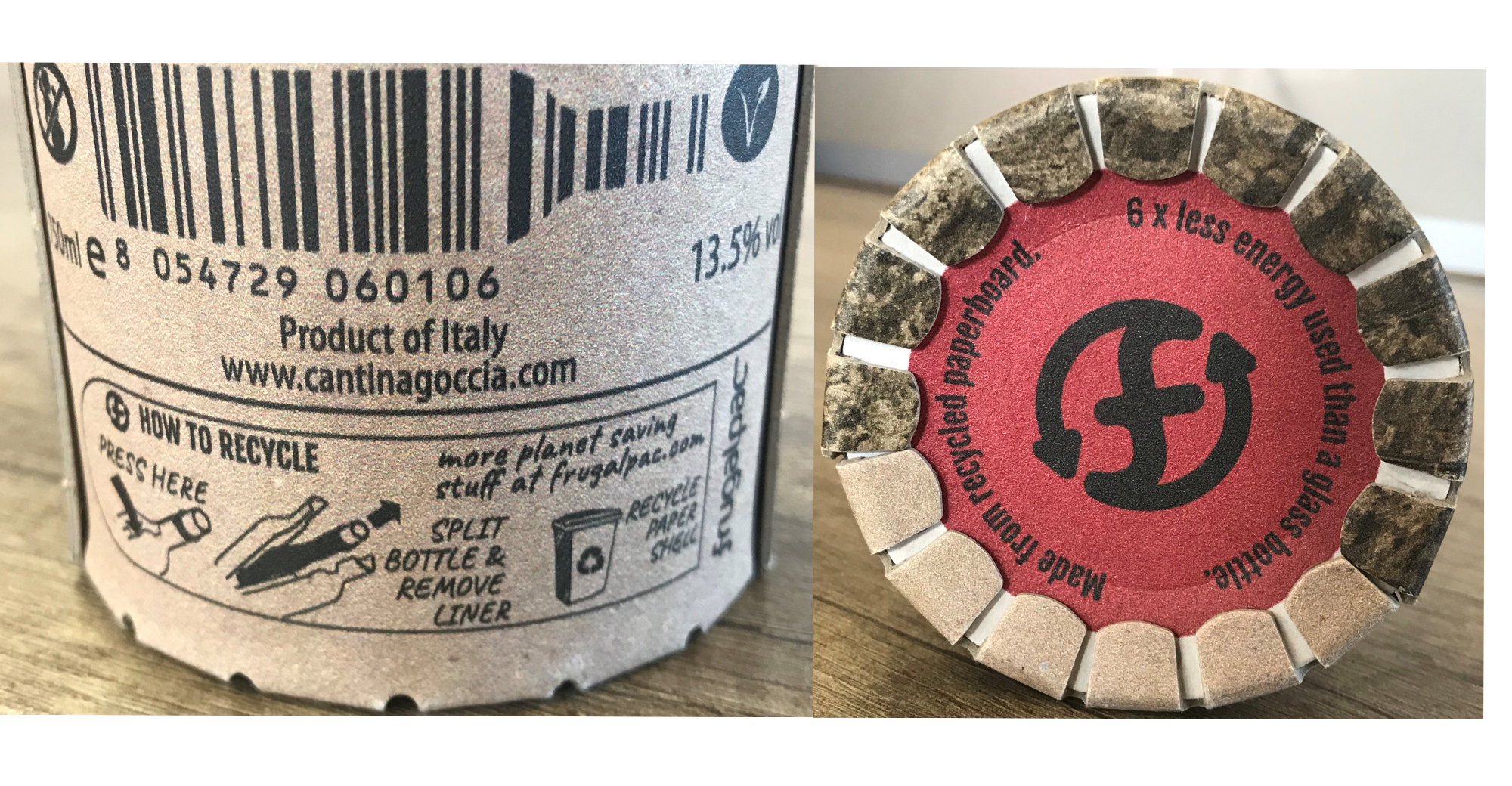 8. Material separation instructions are shown clearly on the bottle, which can be handled in paper recycling streams.  “Simply separate the thin inner pouch by opening the paper bottle and placing each component into the appropriate bins. The Frugal Bottle has been designed so you don’t need to separate the paper bottle from the pouch to recycle it. You can just put the whole bottle in your paper recycling bin and the pouch will be easily separated in the paper repulping process. We also print information on the bottle’s sustainability credentials on the bottom of the bottle.”

10. The business model is as an “open platform” for brands and companies. “Frugal Bottles were initially produced at our Frugalpac HQ in Ipswich, England. We have now scaled up production to meet the global demand for the Frugal Bottles by moving to a larger bottle making facility at Group Roland, which isn’t too far from our HQ.

“Bottle filling can be carried out at the Silent Pool Distillery in Guildford. This partnership will also see Silent Pool produce the world’s first spirit in a paper bottle using one of its excellent gins.

“However, Frugalpac’s business model is to build Frugal Bottle machines and place them at bottling, packaging, and filling facilities, to reduce the packaging’s carbon footprint even further.

“Instead of restricting it to limited consortiums like Paboco and Pulpex, Frugalpac wants to share our innovation with the world with as many producers as possible. We believe this open access approach is also a great opportunity for the packaging, plastics, and print industries as it creates a supply chain for an exciting and innovative sustainably packaged product."

11. It’s generating a lot of interest. “The response has been fantastic and has sparked a huge amount of interest in a drinks industry keen to cut their emissions and appeal to a new audience of consumers interested in sustainability.

“Our first customer, Cantina Goccia, sold out the initial run of 3Q red wine in the UK. They are now launching in Finland, Norway, Denmark, and Sweden and have orders from the US and Japan. The company is pleased with the results they’re set to launch one of their white wines in a Frugal Bottle, too.”

“For example, Spanish wine producer Torres has launched the International Wineries for Climate Action (IWCA) with members targeting an overall reduction of greenhouse gas emissions of 80% by 2045, with a shorter-term target of 50% by 2030. Moving to the Frugal Bottle would allow wine producers to cut the carbon footprint of each bottle by up to 84% and reduce emissions from transporting bottles because the Frugal Bottles can be made and filled on-site.

“In general, we’ve had a lot of interest from bottlers, brands, and retailers from around the world, including North America.”

The company has also created the Frugal Cup, a takeaway cup for coffee and other drinks that offers improved sustainability compared to regular paper or plastic cups. The video below starts with the Frugal Cup.

Tell us about the Frugal Cup.

Waugh: Frugalpac’s mission is to create and supply recycled paper-based products with the lowest carbon footprint that are easily recycled and don’t need to go to a landfill.

The Frugal Cup was designed to solve the huge environmental problem that only one in 400 paper coffee cups is actually recycled. That’s because conventional and compostable cups are made from 100% virgin paper with a laminated plastic or polymer that’s very hard to separate. Thus, the vast majority of coffee cups go straight to landfill.

That’s why we radically redesigned it by making the cup from 96% recycled paperboard and then inserting an inner plastic liner that was lightly embossed to the cup interior. This means the liner can be easily removed in the pulping process in standard waste facilities. As a result, the Frugal Cup has a carbon footprint up to 60% lower than conventional and compostable cups.

Waugh: It’s only slightly more expensive to produce than a conventional or compostable cup, but the environmental benefits outstrip that. What’s more as we use recycled paperboard, the cup has already had several uses before being made into a cup and can be easily recycled again. The Frugal Cup is by far the most sustainable paper cup on the market.

What’s the status or potential for the US and North America?

Waugh: The Frugal Cup is commercially available for the US and North American markets and we hope to see an increased presence over the next year. You can order the Frugal Cup online at www.frugalpac.com.