Love of all things Western, rise of modern retailing good news for converters. 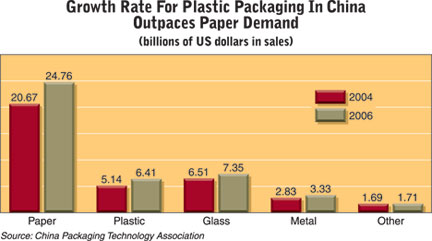 Whenever you look at just about anything related to China, it's always the numbers that are a little hard to fathom. Yes, the country now has a population of 1.3 billion people, and the average purchasing power of each person is $5,300 a year. But there are also 300 million people who still live on a dollar a day or less.

For packaging converters, some of the most important numbers, though, are reflected in the new, burgeoning middle class, says Graham Cox, head of international consultancy for U.K.-based Pira Intl., for it's this segment of the population that's fueling demand for flexible packaging, labels, cartons and other containers. Cox spoke as part of the recent China Pack conference in Chicago, organized by Pira and co-sponsored by Converting and Packaging Digest.

From Shanghai to Xi'an, the 10 largest Chinese cities are home to about 50 million consumers—many with newfound wealth after moving to established jobs from much poorer rural areas. These citizens are a powerful economic force; while making up only 3.6 percent of China's population, they account for 20 percent of all retail sales.

"The middle class's love of Western products and brand names along with the rapid development of modern retailing" is helping to revolutionize packaging demand, Cox says. More than 70 percent of the world's top retailers have operations in China. Western names are gaining ground, especially France's Carrefour, UK's Tesco, and of course, Wal-Mart. These Big Box stores combine standards that are second to none with a heavy dose of point-of-purchase displays, price promotions and "in-store theater"—product demonstrations. 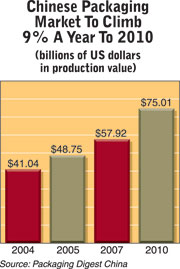 The net effect: a 9 percent annual increase in the overall Chinese packaging market through 2010, according to PD China (see chart). Production value is expected to nearly double from $41.04 billion in 2004 to $75 billion.

A closer look at different packaging materials shows that China's future is moving in the same direction as many other nations (see chart). While paper-based products still dominate the market, the 2004-2006 growth rate for plastics (25 percent) is outpacing paper (19 percent), glass bottles and metal cans.

Other changes afoot, says Cox, are much higher standards for the finished packaging converted. World-class printing, graphic design and value-added features such as easy-opening/resealing are becoming prevalent. The missing element: current logistics and packaging supply-chain mechanisms are inefficient, but they're improving, Cox says.