Coffee packs get a glamorous update 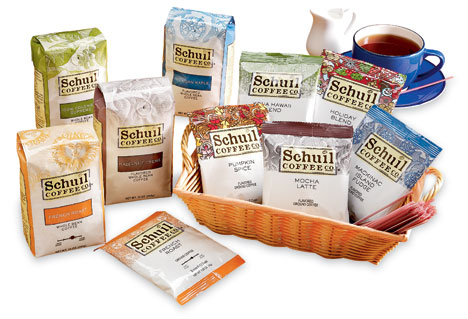 Schuil Coffee Co., one of the first specialty coffee roasters in the country, was started in 1981 by Greta Schuil's parents, Garry and Gladys Schuil, long before "latte" became a household word. Schuil Coffee Company is expanding its wholesale distribution of carefully roasted arabica beans to supermarkets, gourmet stores, coffee houses and other coffee retailers from the Great Lakes region into other regions nationally. It prides itself on the quality of its processes and the freshness of its products.

"Schuil Coffee Co.'s original packaging, designed twenty five years ago when we opened our doors, was innovative for that time, featuring a valve bag and different-colored labels to indicate regular and decaffinated coffee," says Schuil. "But, with the explosion of gourmet coffee packaging in the mid to late 1990s, we realized a change was needed. In the early 2000s, we hired an agency to create updated branding for our product. Unfortunately their packaging efforts were unsuccessful, so the project was tabled. Eighteen months ago, we did an extensive search, and we selected the Newhall Klein agency [Newhall Klein, Inc., USA (www.newhallklein.com)], located in Kalamazoo, Michigan." 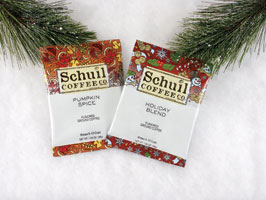 The redesign has been a tremendous success. We just introduced the new packages in September, but the response from buyers and store owners has been overwhelmingly positive.

Schuil coffee produces more than 100 skus in basically two package sizes—a 12-oz typical folded-top bag and a 1.25-oz sealed-top pouch that contains enough coffee to produce one pot. Both packages were redesigned as part of this project. The products are divided into four categories, each with a dedicated color and design theme; the Specialty Import line is in green with a coffee leaf and bean design, the Dark Roast line is in orange with a sun design, the Flavored line is in purple with an aroma design, and the Great Lakes Gourmet line is in blue with a nautical design. Each of these categories has products in both the 12-oz and 1.25-oz sizes. There are also seasonal Autumn and Holiday products that are initially being offered in the 1.25-oz size, whose packages were also redesigned, but are not part of these categories.

In addition to the design firm, Schuil Coffee Co.worked extensively with its current packaging suppliers in its redesign. Pacific Bag, Inc. (www.pacificbag.com) produces the 12-oz bag, and Belmark, Inc. (www.belmark.com-) produces the film for the 1.25-oz pouch, which is produced on a vertical form/fill/seal machine. "My suppliers were fantastic," says Schuil. "The new design was a collaborative effort by the Newhall Klein agency, Adriane Sagal and Lori Sytsma here at Schuil, Pacific Bag, and Belmark and myself. I can't rave enough about how great they all were during the redesign."

This was Newhall Klein's first project with Schuil. "Schuil had always had white packaging, which her customers recognized, and Greta wanted to retain some of that equity and continuity," says Newhall Klein's president and owner, Sandy Klein.

"Schuil has four main categories of coffee, and we designed a color and background graphic pattern for each category, so the products within that category would become meaningful and easily identified, but the umbrella design would be consistent across the entire line. Schuil also has some specialty products that are outside the main categories, and their packaging also had to fit into the overall scheme."

Schuil's two main packaging types presented a challenge. "The two types of packages are made from different materials, and the pouch is flexo-printed, while the bag is gravure-printed," says Klein. "We welcomed working with both suppliers to make sure the finished product for both types of packaging matched. With the 12-oz bag, we had to know where the degassing valve fell, so we could produce the artwork in a way that it didn't interfere visually. For the pouches, we had to know where the repeat fell to make sure that there was no graphic overlap."

While this was a cooperative project with both packaging suppliers involved throughout, Schuil decided to concentrate on the 1.25-oz single-pot pouch first. "Belmark is a domestic producer with offices right here in the Midwest, while Pacific Bag gets its material from Asia and is located in Washington, so we decided to finish the pouches first," says Greta Schuil. "Because continuity of color was essential, but challenging, it made the most sense to me to complete the project with Belmark domestically before getting into the final stages with Pacific Bag."

Belmark's pouch material consists of a reverse-flexo-printed, 48-ga polyester outer layer laminated to a 48-ga metallized polyester laminated to a 1.5-ga polyethylene inside layer. "Printing the material for the four main categories was pretty basic," says Belmark's business manager Jeff Dowd. "Each of those take five colors—three Pantone colors and two white. The material for the holiday products is much more complex, with some items requiring nine colors. Color consistency is a crucial requirement for Schuil, and the colors tend to get darker as the print run progresses, so we regularly check the printed material with a spectrophotometer and correct the ink to maintain uniformity."

Like the pouch material, the bag, which is produced by Pacific Bag, is also made from laminated material. The outer layer is a 48-ga clear polyester that is reverse-gravure printed. The next layer is a 28-ga foil followed by an inner layer of easy-opening material consisting of linear low-density pe containing compounds that provide the easy-opening capability.

An interesting graphic feature of the bag design is a dot pattern that is dense at the top and decreases as the pattern goes down the bag. "This was a challenge, because it was difficult to demonstrate what the finished design would look like," says Pacific Bag's technical director Bill Wolters. To satisfy this need, Pacific Bag's film manufacturer engraved a gradient dot pattern on the outer edge of the cylinder for the bag material to illustrate what this would look like. They then produced press proofs from which Greta Schuil selected the dot gradient she wanted on the bags.

"Schuil coffee has four main categories of products, so we produced four different cylinders, each of which has the design for one category and the Schuil logo," says Walters. "Each category has ten to fifteen different products, and Schuil applies a clear label that contains the product name. You really can't tell there is a label, unless you look very closely, and it is very cost-effective because it minimizes the number of cylinders required and the number of different bags they must keep in inventory."

The bags also contain a one-way degassing valve that allows gas from the coffee to leave the bag, but prevents air from entering. "One of the great things about Pacific Bag is their degassing valve," says Schuil. "This was critical to us because it allows the gas to escape and still maintains the freshness of our coffee." The valve, which consists of a molded pe body and a rubber gasket, contains a drop of silicone oil that creates a seal. Pressure inside the bag causes the valve to open.

"The redesign has been a tremendous success," says Schuil. "We just introduced the new packages in September, but the response from buyers and store owners has been overwhelmingly positive."